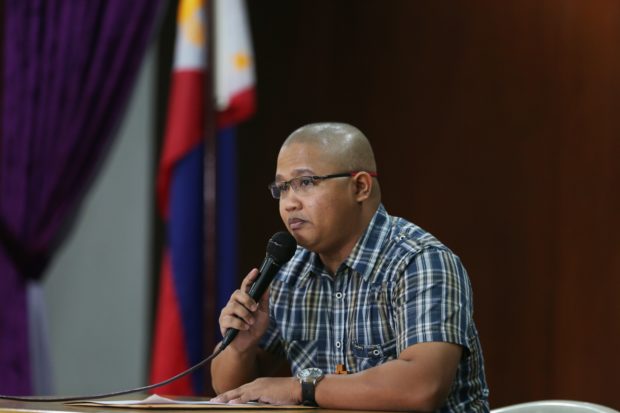 READY FOR GRILLING Peter Joemel Advincula, facing reporters on Monday, says he is ready to face a Senate investigation to prove his allegations in the “Bikoy” videos. —EDWIN BACASMAS

MANILA, Philippines — Sen. Panfilo Lacson on Tuesday summoned Peter Joemel Advincula to a Senate inquiry, a day after the man who claimed he was the whistleblower in the videos that linked members of President Rodrigo Duterte’s family to the illegal drug trade came forward seeking legal help to take his case to court.

Lacson, chair of the Senate committee on public order and dangerous drugs, said he sent an invitation to Advincula through the Integrated Bar of the Philippines (IBP), where Advincula, who claimed he was “Bikoy,” the whistleblower in the “True Narcolist” video series, appeared on Monday and spoke to reporters.

But the senator said he had set a condition for Advincula’s appearance at the hearing, which was initially set for Friday at 9 a.m.

“It will push through once Bikoy confirms his attendance with a sworn statement ready,” Lacson told the Inquirer in a text message.

“In the meantime, we are doing some background investigation and record check on him,” he said.

Advincula may not have received the invitation, as the IBP said on Tuesday that it was not in custody of the whistleblower and did not know his whereabouts.

The IBP leadership also denied calling reporters on Monday to a news conference with Advincula.

“I do not know how the press conference happened,” said Abdiel Elijah Fajardo, outgoing IBP president.

“We are not the ones who called you here,” said June Ambrosio, director of the IBP National Center for Legal Aid. “You would be the ones who could tell us who contacted you.”

On Monday, Advincula said he had asked the IBP legal aid center for help in preparing an affidavit and filing charges against the people he had linked to the narcotics trade in the videos, including President Duterte’s son Paolo Duterte, son-in-law Manases Carpio and former special aide Christopher “Bong” Go.

Ambrosio said on Tuesday that her group had not yet taken in Advincula as a client because he had yet to pass a means and merit test.

She said Advincula appeared qualified for help as he was jobless, but she did not say whether she believed his allegations.

“It’s entirely possible that another lawyer will volunteer to take this up. After all, he can still consult other lawyers,” Fajardo said.

Lacson advised the IBP to be careful about helping Advincula, as it might be accused of “engaging in political partisanship, which could punch a hole and deflate [its] credibility.”

“As [for] the Senate, we will await his sworn statement and whatever supporting evidence he has, after which we will evaluate and proceed from there,” he added.

The IBP chapter in President Duterte’s hometown, Davao City, on Tuesday criticized the group’s national office for allowing itself to be used as the “staging area” for Advincula’s show, which it said it did not support.

Paolo Duterte, a former vice mayor of Davao City, also slammed the IBP national office on Facebook, saying: “IBP found Bikoy’s allegation as believable. I’m losing respect of the IBP, you’re supposed to be lawyers but how easy it is for you to take the bait of a scammer who called himself Bikoy.”

Fajardo and Ambrosio, however, said neither of them issued a statement offering an assessment of the substance of Advincula’s statements.

Fajardo reiterated that the group had not yet taken in Advincula as a client.

In a statement he read to reporters at the IBP national office in Pasig City on Monday, Advincula repeated his allegations in the videos that Paolo Duterte, Carpio and Go were members of an illegal drug syndicate who had amassed millions of pesos in narcomoney.

He said he was ready to face a Senate investigation “to prove everything I have put forth in the video series.”

Advincula said he decided to go public because he had received threats to his life.

He also told Advincula to bring with him Sen. Antonio Trillanes IV, the first to accuse the former vice mayor of Davao City of involvement in the illegal drug trade.

Malacañang had tried to link the Bikoy videos to an alleged destabilization plot against President Duterte hatched by certain journalists, news websites and activist lawyers.

On Tuesday, the Palace said Advincula could not be acting alone, and vowed to expose the people who were operating behind the whistleblower.

Presidential spokesperson Salvador Panelo said investigators were looking into the identities of those people, adding that Advincula was merely a “pawn” in a “black propaganda.”

“I can’t say it as of now, but it seems the investigators are looking at a potential bombshell, from the way I look at it,” Panelo said.

In an earlier statement, Panelo dismissed Advincula’s report of threats to his life as part of a “fraudulent act.”

Justice Secretary Menardo Guevarra on Tuesday warned Advincula that he faced criminal charges if he could not prove his allegations. In same boat as Jayme “Peter Advincula can go to the NBI and present his evidence, if he has any,” Guevarra said. “If the NBI finds that Advincula had nothing to show by way of competent evidence, he might find himself in the same boat as Rodel Jayme,” he said. Jayme owned the YouTube channel through which the Bikoy videos were propagated on the internet. He was arrested last week and charged on Monday with inciting to sedition and cyberlibel. The justice department had recommended P36,000 bail for him. Police General Oscar Albayalde, the chief of the Philippine National Police, on Tuesday told a news conference that investigators were looking into Advincula’s background to see whether he was indeed Bikoy. So far, they had found that Advincula’s claims that he had done time for illegal recruitment and fraud for signing certain papers at VitaPlus health drink company where he worked were true. “So it seems he’s good in estafa and in talking. You could just imagine, to be charged for large-scale illegal recruitment, that means he’s fooled a lot of people,” Albayalde said. Former seminarian

Investigators had also found that Advincula was a former seminarian.

“So maybe he uses that to fool people,” Albayalde said.

He said investigators were still looking into Advincula’s claim that he had worked for a drug syndicate. —WITH REPORTS FROM MATTHEW REYSIO-CRUZ, JULIE M. AURELIO, DONA Z. PAZZIBUGAN, JAYMEE T. GAMIL, MART SAMBALUD AND ORLANDO B. DINOY