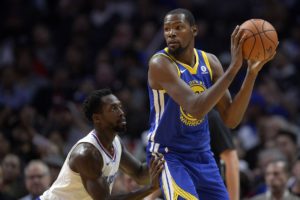 The Los Angeles Clippers face the  Golden State Warriors  Wednesday in game five of the NBA Western Conference playoffs at the Oracle Arena.

The Clippers battled back from a 10-point deficit at the end of the first quarter of Game 4 to take a five-point lead over the Warriors in the third. Despite getting at least 13 more free throw attempts than the Warriors for the second straight game, the Clippers were unable to keep the momentum and fell to the Warriors for their second loss at home in the series.

This was also the second time in back-to-back games that the tandem of Lou Williams (20 ppg in regular season) and Montrezl Harrell (16.6 ppg) were held under their season averages as Williams finished with 12 points on the day while shooting just 20 percent from the field, and Harrell posted 10 points, his lowest scoring output since March 8th against the Oklahoma City Thunder.

The Clippers rely heavily on their production from the bench, so look for the team to get these two sprung free from the Warriors defense in Game 5. Shai Gilgeous-Alexander made up for their struggles in a big way though, coming alive for a career-high 25 points. He and the other Clippers guards that make up their starting backcourt, Patrick Beverly and Landry Shamet, provided extra firepower from distance by finishing 9-of-16 on three-point shots; the Clippers were the second best three-point shooting team in the regular season, but they were unable to get consistent contributions from their remaining players in Game 5

The Golden State Warriors are about to officially punch their ticket to the second round of the 2019 NBA playoffs. The back-to-back defending champs will host the Los Angeles Clippers Wednesday night in Game 5 with a 3-1 series lead.

While Stephen Curry struggled to find his touch from the perimeter, Klay Thompson was feeling it in a big way as he poured in 32 points to go along with Kevin Durant’s 33 points to help lead the Warriors to a victory and a 3-1 lead over their Pacific Division rival in their best-of-seven series.