Warriors offseason breakdown: How Kevin Durant leaving could save $1 billion; why DeMarcus Cousins could be back 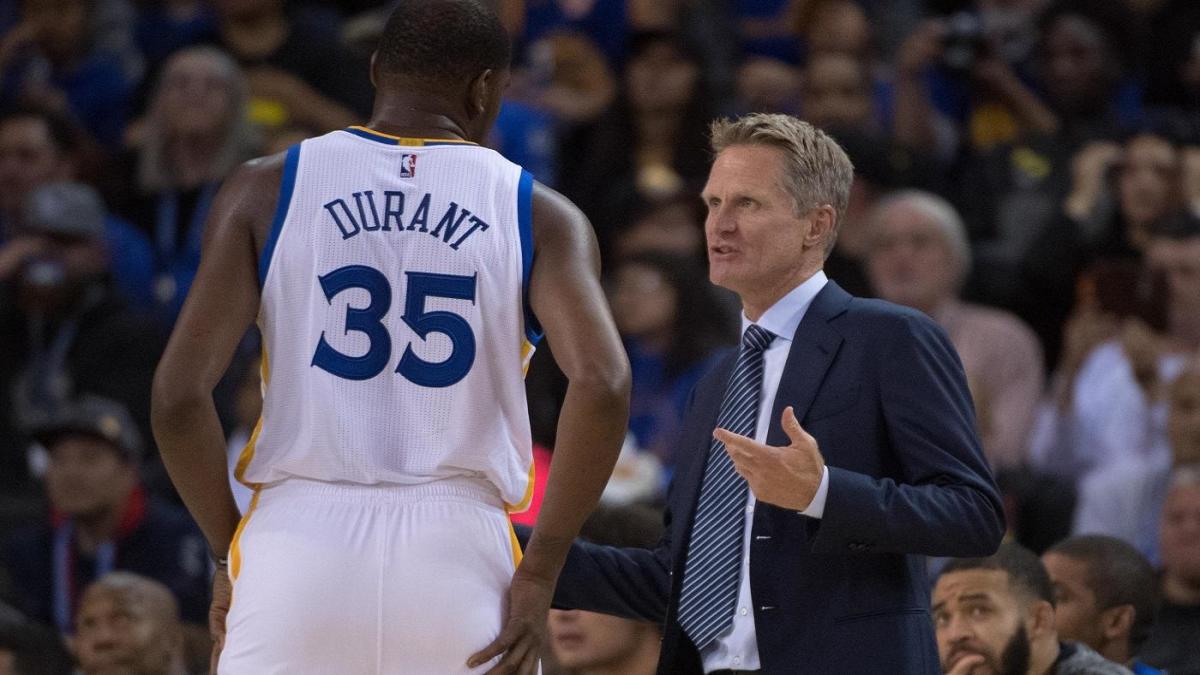 The Golden State Warriors saw their shot at a three-peat go down the drain in just about the most unlikely fashion possible. Kevin Durant tore his Achilles tendon. Klay Thompson tore his ACL. Kevon Looney broke his rib. All three of those players are free agents this summer — along with DeMarcus Cousins, Quinn Cook, Jordan Bell, Jonas Jerebko and Andrew Bogut — and the Warriors are suddenly in danger of a precipitous fall from grace with virtually no means to replace anyone they lose. Remember, teams over the salary cap, which the Warriors are by a mile, can only pay to re-sign their own players.

There are mid-level exceptions and minimum salaries to help teams like the Warriors fill out their roster, but for all intents and purposes, Golden State’s only shot at remaining a championship contender is to convince its own free agents to stay put. That’s what this whole summer is about.

Here’s a breakdown of the Warriors’ offseason, with an eye toward what things could look like next season when they open up the $1.4 billion Chase Center in San Francisco.

The Kevin Durant situation Despite Durant’s Achilles tear, which will almost certainly keep him out all of next season, there is every indication that he’ll receive the same max contract offers he was in line to get before the injury. Here is what he’s eligible to make:

The third option is that Durant opts into the last year of his current contract with the Warriors, which would pay him $31.5 million and postpone his free agency until 2020. This is seen as a backup plan in case no teams feel comfortable offering him a long-term deal in the wake of the injury. Again, teams aren’t going to be scared off. He’s going to get max offers, including, almost assuredly, from the Warriors.

The expectation around the league is that Durant will leave Golden State. Assuming Thompson signs a max deal to stay, the Warriors would still be well over the salary cap and thus wouldn’t have the means to replace Durant outside of using their mid-level exception for an outside player, which could range from $5.7 million to a little over $9 million — not nearly enough to replace Durant, if that were even possible at an price.

If Durant does stay long term, the tax bill could be astronomical.

We’ll get to that in a second.

The Klay Thompson situation Despite his torn ACL that will likely keep him out until at least February next year, with no guarantee he’ll be back to full 100-percent performance until the following season, Thompson is indeed expected to get a max offer from the Warriors — which for him, since he didn’t make any of the three All-NBA teams this year, is five years, $190 million.

Like Durant, the most Thompson could get from another team would be four years, $164 million. For what it’s worth, Klay’s father, Mychal Thompson, says there’s “no question” Klay will re-sign with Golden State — assuming they don’t low-ball him.

Just spoke with Klay Thompson’s father, Mychal, who said there’s “no question” Klay will re-sign with the Warriors. Golden State is expected to still offer him a full five-year maximum deal.

Breaking down the money

About that huge tax bill

This is wild, but here’s the deal. Per ESPN, the Warriors could become the first team to field four max-contract players with Stephen Curry already one, Thompson and Durant potentially two and three this summer, and Draymond Green up for his own max contract next summer. If they sign all those guys, then re-up Looney at roughly $15 million over three years, even if they fill out the rest of the roster with minimum-salary players and draft picks, their total bill in salary and taxes with be $1.6 billion over the next four years.

On the flip side, if the Warriors were to lose Durant and only sign Thompson and Green to max deals, their four-year bill in taxes and salary would “drop” to $629 million, per ESPN. Do the math, and that’s a billion dollars difference riding on Durant. A billion freaking dollars. For one player. The Warriors’ owners paid $450 million for the entire franchise in 2010.

Here’s the nitty gritty with all four on max deals:

When the Warriors signed Cousins last offseason it was seen as a certain one-year marriage: The Warriors get a bargain signing with no downside, and Cousins gets a year to prove he is fully recovered from his torn Achilles and can be an impact player on a winning team. Almost nothing went according to plan.

Cousins went from a gravy signing to a core player in the Finals by default. His playoff run was a short sample size for potentially interested teams that were looking to evaluate him on the big stage. He tore his quad in the first round and didn’t return until the Finals, where he was unplayably bad in a few games and a major contributor in others.

So now we have no idea what Cousins might be offered on the open market. If it’s a long-term deal, he has to take it with the uncertainty of his health. But there’s a chance nobody offers him more than another one-year deal, in which case the Warriors suddenly become a player to bring him back.

Cousins is thought to be a mid-level exception player, meaning he’ll probably get offers in the one year, $9 million range. Maybe some team with cap room gives him a one-year deal for a little more. The Warriors, on the other hand, can only offer him a bit over $6 million. But with no Durant and Thompson likely out most of next season, Cousins might be willing to sacrifice some money for another one-year showcase with what would surely be an integral role on a good team.

Cousins isn’t a perfect fit with Golden State, but this team is likely going to look a lot different next season and will have to adjust its attack accordingly. Without Thompson and Durant, Curry is really the only dangerous shooter on the team as it stands. Running their offense through Cousins a bit more in the low post and utilizing him as a high-post hub would give Cousins a comfortable role while providing the Warriors with a new way of scoring after years of running and gunning.

If I had to bet, with all the injuries and the lack of options for both Cousins and the Warriors in terms of finding a better partner in the short term, I’d say Cousins will be back with Golden State.

Livingston is on the books for $7.7 million next season, but only $2 million of it is guaranteed if the Warriors were to waive him by June 30th. Livingston said after the Finals that he will consider retiring, which will take the decision of whether to keep him off the Warriors’ plate.

The difference in keeping Livingston and dropping him lies in the mid-level exception money that will be available to Golden State to go outside their own roster to sign free agents. In the scenario in which Durant leaves and Thompson stays, if the Warriors waive Livingston and stretch the $2 million guaranteed they own him over the next three years, they would be afforded the full MLE at just over $9 million.

If Livingston stays and collects his full salary next year, the Warriors would only have the $5.7 million MLE to go get an outside player. The problem is the timing. Again, they have to decide on Livingston before June 30th, the same day free agency begins, meaning they likely won’t know whether Durant is going to stay before they have to decide on Livingston. If Durant stays, the full MLE is out anyway in which case the Warriors would have to feel they could get a better player than Livingston for the lesser $5.7 million. That is far from a guarantee with all the teams that have cap space this summer likely driving up the price of whatever decent MLE players are floating around unsigned.

The good news is if Durant does sign, since he likely won’t play a single game next season, the Warriors would be compensated with a $9.2 million Disabled Player Exception that would give them a little extra spending money on the open market, independent of the Livingston decision.

The Warriors are going to sell out to re-sign Durant and Thompson this summer because they are moving into the $1.4 billion Chase Center and they don’t have any other means of putting a championship team on the floor given their cap situation. If Durant leaves, Cousins, in terms of All-Star talent, becomes the only current Warrior with a high enough ceiling, if he were to completely return to his pre-injury form, to make enough of a leap from last year’s production at least marginally replace Durant’s production. At his best, he can get you 25 points and 12 boards a night. On paper, that’s Durant production, though we all know the difference. Whether the Warriors can keep Cousins will depend on what other teams are willing to offer.

Either way, the Warriors are not going to have many new faces next season. Those lineups with Quinn Cook and Jonas Jerebko and Alfonzo McKinnie you saw in the NBA Finals? Get used to them. Even if Durant re-signs, he’s out for next season. On the court, the Warriors will have to get by for probably 60-plus games with a core of Curry, Draymond, an aging Andre Iguodala and perhaps Cousins and Looney until Klay can hopefully get back in time for the stretch run and playoffs.

If they can make it there. That sounds crazy to suggest, but the West, as we know, is stacked, and there’s a chance that the Lakers turn into a super-team within the next few weeks with an Anthony Davis trade a growing possibility and still a max slot available to bring in a third star via free agency alongside A.D. and LeBron James. The Mavericks are going to be a lot better with Luka Doncic and Kristaps Porzingis paired up. The Clippers could very well get Kawhi Leonard and be fantastic. That’s on top of the Rockets, Blazers, Thunder, Jazz, Spurs and all the other usual suspects.

Doubting a team led by Stephen Curry and Draymond Green is not smart business. I wouldn’t be surprised if they got on one of their “us against the world” rolls next season and still wound up a top-four seed with Klay coming back for the playoffs. But they’re going to be limited, no doubt. There is no quick fix to the reality of losing Durant, whether it’s for the long term or just next season with his injury.