NBA Finals 2019: With Kevin Durant ruled out for Game 4, will Warriors’ decision to sit Klay Thompson in Game 3 haunt them?

Steve Kerr played with fire, and it might just come back to burn Golden State 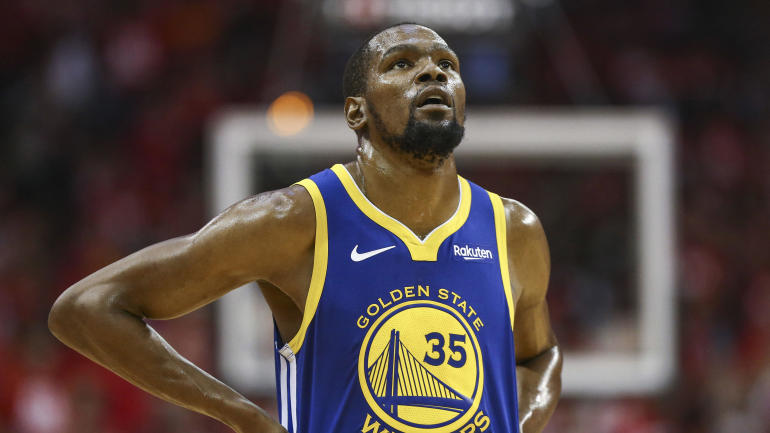 Steve Kerr played with fire by sitting Klay Thompson in Game 3 of the NBA Finals. We’ll have to wait and see if it burns the Warriors, who are now down 2-1 to the Toronto Raptors heading into Game 4 on Friday, in which Thompson will play. But bigger news: Kevin Durant WILL NOT play in Game 4, making the decision to sit Thompson in Game 3, and perhaps give away that game in the process, even more, dangerous in hindsight.

JUST IN: Klay will play Game 4 but Kevin Durant is OUT. @YahooSportsNBA pic.twitter.com/EHyZyxwkUL

Steve Kerr just told me that he expects Klay Thompson to play in Game 4 on Friday. Kerr said he doesn’t know yet about Kevin Durant’s status for that game.

This is all to say, this was the plan all along. To play Thompson in Game 4. He didn’t get markedly better in the meantime. He was healthy “enough” to play in Game 3, plain and simple, but Kerr played it safe. And in doing so, he has put the Warriors in big-time danger. As the series shifted from Toronto to Oakland, all indications were that Durant was progressing at a rate that would put his return somewhere around the “midway” point of the series. Game 3 was seen as a possibility. Game 4 a very strong possibility. The Warriors were banking on that, though they had a game to play with, and now here we are.

“The whole point was to not risk a bigger injury that would keep him out of the rest of the series,” Kerr said after Game 3. “So that was the decision we made, and I feel very comfortable with it. Never would have forgiven myself if I played him tonight and he had gotten hurt.”

Will Kerr forgive himself if the Warriors lose the title? Obviously, there’s no guarantee the Warriors would’ve won Game 3 had Klay played. But he sure would’ve helped. Stephen Curry was all by his lonesome offensively, and the Warriors got cooked defensively, especially in the first half when absolutely nobody could cut off Toronto’s seemingly free pass to the rim.

Thompson is one of the best on-ball defenders in the NBA. Even at 75 percent, just to put a general number on it, he’s an above-average defender and a dead-eye shooter. Outside of Curry, the remaining Warriors shot 36 percent from the field in Game 3. The Raptors shot the lights out, but Golden State was still within seven points on multiple occasions in the second half. The Warriors could have won that game with a little extra push, even with Toronto clearly being the better of the two current teams.

That’s what Curry and Thompson do, after all. They erase sins with their shooting. Curry damn near did it by himself. But that chance is gone now, and all that’s left is a 2-1 deficit that everyone thinks is just going to magically disappear because Thompson is coming back in Game 4. This just in: The Raptors are really good, and the Warriors are not invincible, even at full strength. In the 10 playoff games Curry, Durant, and Thompson have played in together this year, the Warriors are 6-4. They lost two games to the Clippers and two games to the Rockets, and Toronto is better than both those teams.

People don’t seem to get this. Somehow, the Warriors were FAVORED in Game 3 to even with Durant, Thompson and Kevon Looney out. It was basically Curry and Draymond Green against an entire NBA Finals team and the Raptors were STILL expected to lose. They didn’t. And now, according to our SportsLine projections, Toronto is a 53-percent favorite to win the series.

Conversely, by losing Game 3, the Warriors went from an 82-percent chance to win the title to a 47-percent chance. If they were playing blackjack, they just willingly gave up almost 40 percent odds in their favor in one game. And make no mistake, Golden State, in a sense, absolutely played blackjack here. They gambled. By keeping Thompson out, They made a bet that a 2-1 deficit and the fact that Toronto has been the better team for 10 of the 12 quarters of this series won’t matter once they get their big guns back. Even Draymond said it after the Game 3 loss.

Draymond Green: “Win the next game, go back to Toronto, win Game 5, come back to Oracle, win Game 6. Celebrate. Fun times ahead.”

Wouldn’t it be great if it actually plays out this way? Thompson comes back in Game 4, perhaps Durant joins him by Game 5, and the Warriors rattle off three straight wins and finish their fourth title in five years in Game 6 back at Oracle Arena, the perfect sendoff for the last game in front of the Oakland fans as the team sets to move to San Francisco next season. It’s a great plan. But the Raptors have plans of their own. And so far, they’ve been a lot better at executing them.

This entry was posted in Basketball News & Updates, News and tagged golden-state-warriors, kevin-duranr-injury. Bookmark the permalink.