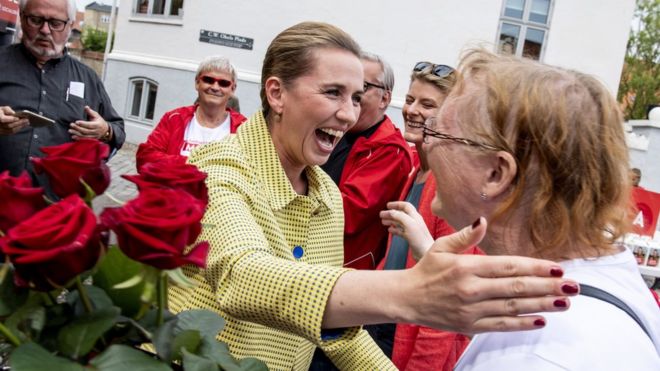 This would pave the way for the Social Democrats to form a government under party leader Mette Frederiksen.

At 41, she would be the country’s youngest ever prime minister.

If confirmed, the results would end the rule of Prime Minister Lars Lokke Rasmussen’s Liberal Party, which has been in power for 14 of the last 18 years.

His right-wing “blue bloc” was set to get 80 seats, according to the exit polls.

The exit polls suggested that support for the far-right Danish People’s Party (DF) had more than halved since the last election in 2015.

The party has offered its support to successive right-wing governments over the past two decades in exchange for stricter policies on immigration.

But with major parties, including the Social Democrats, adopting restrictive immigration policies in this election, observers say the DF has lost its unique appeal.

Denmark could become the third Nordic country in a year to elect a leftist government, following Sweden and Finland.

Who are the major parties?

The five-party red bloc is headed by the center-left Social Democrats, who have spent the past four years in opposition. During the campaign, the Social Democrats pledged to increase public spending, hike taxes for businesses and the wealthy, and partially roll back pension reforms so that people who have worked for 40 years can retire earlier.

The blue bloc is splintered into eight parties, of which three are newcomers. The pro-EU Liberal Party (Venstre) has ruled Denmark since 2015, forming a coalition with the Conservative People’s Party and the Liberal Alliance.

It became the biggest Danish party in the European Parliament last month and promised in the national elections to put extra money into the welfare system and crack down on immigration.

What were the key issues?

Welfare: Many voters were concerned over the fate of the country’s cherished welfare model, which has faced years of cuts amid struggles by successive governments to deal with aging populations. Danes pay some of the highest taxes in the world to support a generous cradle-to-grave welfare state.

But they say cuts mean they are increasingly paying for services that used to be free and worry that further austerity measures could erode key services such as health care and education. The environment: Some 57% of Danes wanted the next government to prioritize climate change, according to a Gallup poll released in February.

For younger voters, aged between 18 and 35, the figure was 69%. Immigration: Major parties on the right and left adopted anti-immigration policies.

Both the Liberal Party and the Social Democrats said doing so would help to protect the welfare system.

This entry was posted in News and tagged democrats, denmark-election, lars-lokke-rasmussen's. Bookmark the permalink.