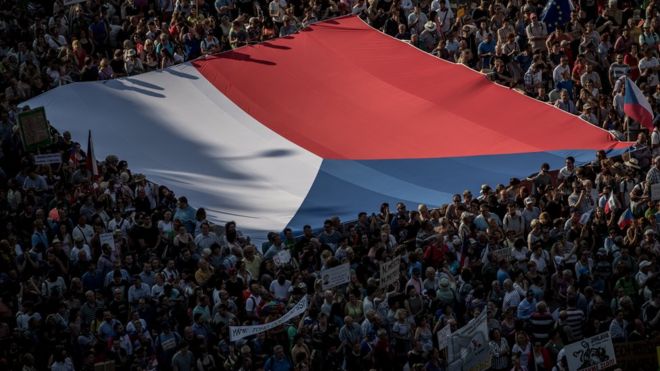 Tens of thousands of people have protested in the Czech capital, Prague, calling for the resignation of Prime Minister Andrej Babis, who is accused of fraudulent use of EU subsidies.

Organisers said as many as 120,000 were attending Tuesday’s rally.

If confirmed that would make it the biggest since the fall of communism during the 1989 Velvet Revolution.

Mr. Babis denies fraud and has attacked a draft EU report demanding the return of millions of euros in subsidies.

The “million moments for democracy group” has staged rallies every week since the end of April, with an estimated 50,000 people joining a protest in Prague’s Wenceslas Square a fortnight ago.

The organizers said they had more than doubled that number on Tuesday, which would make it the biggest protest for 30 years.

As protesters held up pictures of Mr. Babis with the simple message “resign”, speakers addressed the crowd in front of a backdrop reading “prime minister or crime minister?”.

Why are they angry? Andrej Babis is the Czech Republic’s second richest individual and a former communist.

He came to power in 2017 at the head of the populist ANO (Yes) party on an anti-corruption and Eurosceptic platform, forming a minority government with the left-wing Social Democrats.

Despite the campaign to oust him, his ANO party came first in the European elections last month, with 21.2% of the vote. 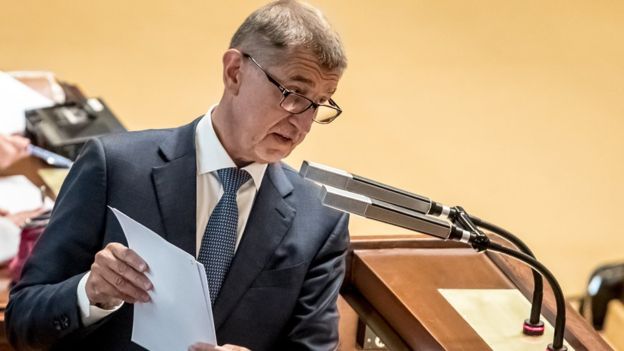 Mr Babis has attacked the allegations against him as a smear

In April, police proposed that Mr. Babis be charged with EU subsidy fraud, an allegation he has rejected. The justice minister resigned and was replaced by Marie Benesova, who has since become a target for protesters too.

Then a European Commission draft report was leaked last Friday which concluded he should return millions of euros in subsidies. Mr. Babis, 64, had transferred his Agrofert conglomerate to two trust funds two months before he came to power in 2017.

The group has interests in food, chemicals, and media. But the 71-page Commission audit found that he was still making profits from the group, because he was the sole beneficiary of the trust funds, and said all EU subsidies received by the company should be returned.

The leaked report said the prime minister had “a decisive influence” over the trust funds and was in a conflict of interest.

When the leaked report emerged, Mr. Babis condemned it as a “filthy lie”.

This entry was posted in News and tagged andrei-babis, communism, czech-republic, prague, prime-minister. Bookmark the permalink.