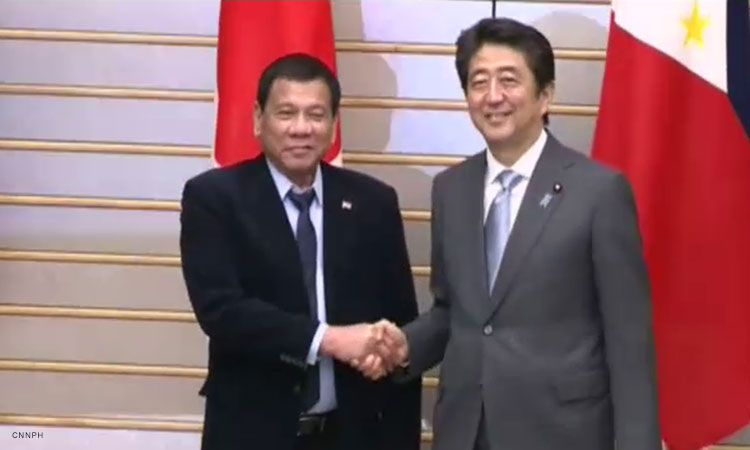 In a joint press event Friday with Japanese Prime Minister Abe Shinzo, Duterte announced that Japan has pledged ¥25 billion, or approximately ₱12 billion, for the region.

“I am grateful for Japan’s fresh commitment of around 25 billion yen for the development of Mindanao’s road network, vocational training facilities and equipment, and other projects,” Duterte said. He added that Japan has been a partner in achieving peace in the region.

“I thanked Prime Minister Abe for the importance his government attaches to Mindanao and its commitment to achieve just and lasting peace and a sustainable development for the people of Mindanao,” he said.

Abe for his part said with the establishment of the Bangsamoro Transition Authority, the priority lies in strengthening the BTA’s administrative capacity and the facilitation of disarmament of Moro Islamic Liberation Front fighters.

“Japan will strengthen our support attuned to the progress of the peace process so that the people of Mindanao can truly feel and enjoy the peace dividend at the earliest possible time,” he added. The two leaders reaffirmed the close ties of Japan and the Philippines, with Duterte calling the country “a friend closer than a brother.

” The two also talked about maritime security, peace in the Korean Peninsula, free trade, rule of law, and “non-traditional threats,” Abe said Japan and the Philippines are both maritime nations with shared basic values and strategic interests.

“”During the course of the meeting this afternoon, we confirmed plans to strengthen our partnership as we confront such challenges as the realization of a Free and Open Indo-Pacific based on the rule of law, full implementation of the United Nations Security Council resolutions towards the denuclearization of North Korea and early resolution of the abduction issue.

” While he did not mention China, both the Philippines and Japan have maritime rows with Beijing — in the South China Sea in the case of Manila and in the East China Sea in the case of Tokyo. Those areas, where China’s aggressive behaviour have prompted calls from the international community for it to abide by the rule of law, are part of the Indo-Pacific region.

The abduction issue refers to Japan’s longstanding demand for the return of Japanese nationals abducted by North Korean agents in the 1970s and 1980s.