C.J. Anderson on Lions: ‘I was really wanted here’ 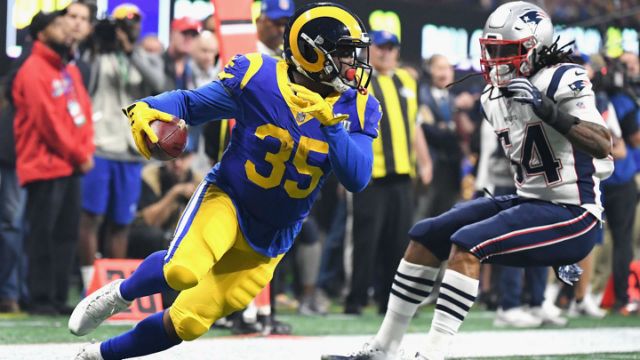 Perhaps it’s arduous to contemplate that across the first five NFL seasons of C.J. Anderson’s career, the one-time Pro Bowl running back played for only one team — the Denver Broncos.

After all, his 2018 campaign was one of many travels. Since Anderson was cut by the Broncos in April of 2018, the bowling ball of a running back has become a journeyman of sorts, having signed with four NFL teams — the Carolina Panthers, the Oakland Raiders (for all of one day), the Super Bowl-bound Los Angeles Rams and now the Detroit Lions.

“You want to go where you’re wanted,” Anderson said via mlive.com’s Nate Atkins. “I was really wanted here.”

Following his stints with the Panthers and Raiders, Anderson appeared closer to the conclusion of his career than a resurgence. However, when Rams running back Todd Gurley was injured down the stretch for the NFC-front-running Rams, Anderson was signed and shined.

In only a pair of games to end the Rams’ regular season, he ran and bounced and rumbled for 299 yards with a pair of touchdowns on the ground. Another 100-yard rushing game came in an NFC Divisional Round defeat of the Dallas Cowboys. Thereafter, the Rams’ running game waned, but Anderson was still an important cog.

Thus, it was a bit of a surprise with Gurley’s future still in question that L.A. didn’t look to re-sign him, though that’s most likely due to the return of Malcolm Brown, who was injured when Anderson joined the Rams roster.

Consequently, the Rams had to match an offer sheet by the Lions to sign Brown this offseason, who was a restricted free agent. And so Anderson has found his way to Motown, where he finds himself wanted after inking a one-year deal.

To prognosticate that Anderson will be the Lions’ go-to back in a bell cow role is likely folly with Kerryon Johnson returning after garnering notice as a rookie. Still, Anderson’s strong style of running, his versatility and experience should be a boon for the Lions. And it’s a chance for Anderson to contribute for a full season a year removed from making three franchise stops.

“I’ve done everything that a complete back would want to do,” Anderson said. “I’ve had some times where I’ve put it together for 16 games and you get rewarded with Pro Bowls and things of that nature, and I’ve done it at that level, too. It’s just finding the right opportunity, get another 16 again, put a full 16 together and hopefully find a home.”

This entry was posted in NFL and tagged cj-anderson, detroit-lions, nfl. Bookmark the permalink.