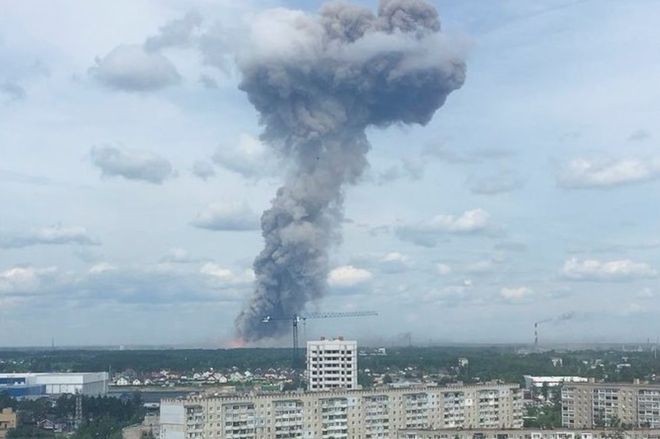 The explosion sent a mushroom cloud into the sky above Dzerzhinsk

A factory explosion in the Russian city of Dzerzhinsk has injured 79 people and damaged 180 homes nearby.

City officials say that the factory was used to produce and store high-explosive bombs for the military.

They add that the processing facility at the JSC Kristall Research Institute plant has been completely destroyed by the blast.

A factory official says five people were inside at the time, but they were safely evacuated.

Most of the people who were hurt were cut by flying glass from the explosion, which also caused a shockwave that smashed windows in homes and other factories in the city. 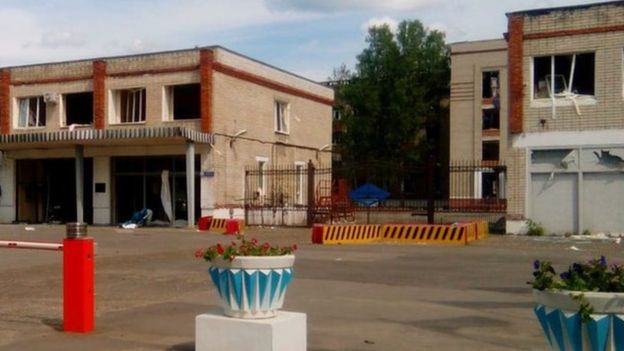 The shockwave smashed windows in buildings near the factory

Dzerzhinsk city officials have declared an emergency in the surrounding areas, while the Investigative Committee of Russia says it has launched a criminal investigation into potential safety violations at the plant.

A local health ministry statement says: “According to the latest information, 79 people asked for medical help after the explosion at Kristall: 38 factory workers and 41 residents of the city. There are no children among the injured.”

It adds that 15 people were hospitalised, but no one had died. Earlier, a local health official said that most victims were suffering from “shrapnel wounds of mild and moderate severity”.

Meanwhile, residents have posted photos on social media showing a huge mushroom cloud billowing out over the blast area.

Officials said it was a “technical explosion” in one of the workshops, which caused a fire of around 100 sqm. Last August three people died in another factory blast in Dzerzhinsk, in central Russia, which is believed to be one of the world’s most polluted cities.

This entry was posted in News and tagged dzerzhinsk, russia, russian-explosive. Bookmark the permalink.