North Koreans face a daily struggle to make ends meet due to a “vicious cycle of deprivation, corruption and repression”, a new report says.

North Korea has rejected the report as being “politically motivated for sinister purposes”.

The report, entitled The Price is Right, is based on interviews carried out with 214 defectors in 2017 and 2018.

It notes that the collapse of the state-run distribution system in the 1990s has forced an estimated three-quarters of the population to turn to informal markets as everyday rations are no longer enough to survive.

“If you just follow instructions coming from the state, you starve to death,” one of the defectors said. But the markets exist in a legal grey area, which leaves people vulnerable to officials wanting bribes.

Those who try to earn money this way “face arrest and detention”, the UN report noted. Women wanting to earn money are particularly vulnerable, it adds. Yet those with the resources “can get away with anything, including murder”, another North Korean defector told the report’s authors. 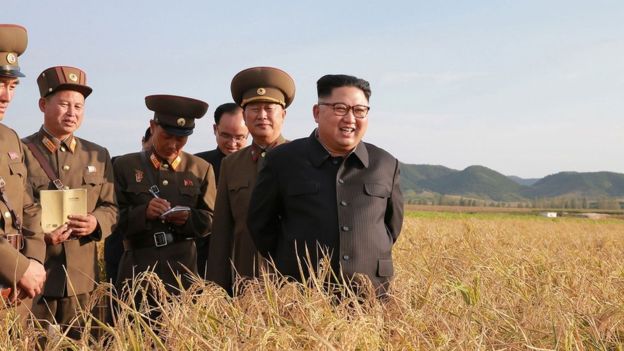 The UN report also criticises the economic management of the country under Mr Kim, who has ruled since his father’s death in 2011. North Korea blames its economic woes on sanctions, which were imposed over its nuclear weapons programmes.

But, the report notes, the military still receives priority funding over ensuring people have enough food. The World Food Programme estimates that 10.1 million people are now suffering from severe food shortages, while the worst harvest in a decade has left the country short of more than a million tonnes of food.

“I am concerned that the constant focus on the nuclear issue continues to divert attention from the terrible state of human rights for many millions of North Koreans,” Michelle Bachelet, the UN’s High Commissioner for Human Rights, said.

“The rights to food, health, shelter, work, freedom of movement and liberty are universal and inalienable, but in North Korea they depend primarily on the ability of individuals to bribe state officials.

” North Korea responded angrily to the allegations laid out in the report.

“Such reports are nothing more than fabrication…as they are always based on the so-called testimonies of ‘defectors’ who provide fabricated information to earn their living or are compelled to do so under duress or enticement,” its Geneva mission told Reuters news agency.

This entry was posted in News, News Philippines and tagged kim-jong-un, north-korea, united-nations. Bookmark the permalink.