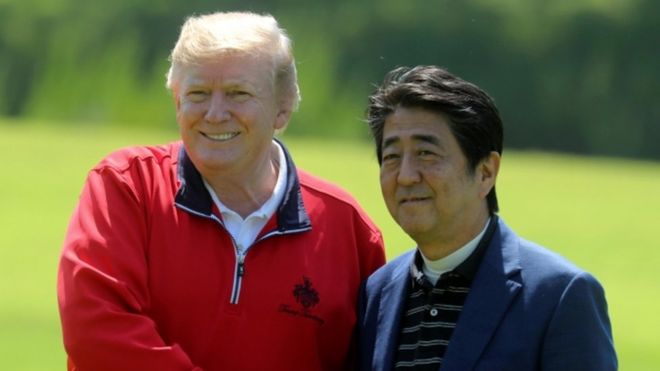 In a tweet issued shortly after his arrival in Japan on Sunday, Mr Trump called the missiles “small weapons”.

President Trump began a state visit to Japan on Sunday by teeing off a round of golf with Prime Minister Shinzo Abe.

The two leaders ate breakfast together on Sunday, before heading out to play 16 holes of golf in Chiba, outside the capital Tokyo. Mr Trump has said he wants to strike a deal with Japan to address what he has called a trade imbalance between the two countries.

North Korea fired off some small weapons, which disturbed some of my people, and others, but not me. I have confidence that Chairman Kim will keep his promise to me, & also smiled when he called Swampman Joe Biden a low IQ individual, & worse. Perhaps that’s sending me a signal?

Mr Trump wrote: “North Korea fired off some small weapons, which disturbed some of my people, and others, but not me.”

He added: “I have confidence that Chairman Kim will keep his promise to me.” Not for the first time, his tweet appeared to put him at odds with Mr Bolton, and also with his host nation. Mr Abe last week called the North Korean tests “extremely regrettable”.

The contrast between the president and his national security adviser followed other recent divergences on foreign policy, including how to approach the crisis in Venezuela and US relations with Iran.

A rapprochement between North Korea and the US appeared to be in the offing last year after Mr Trump and Mr Kim met in Singapore.

But relations have soured in recent months after a second summit between the leaders in Vietnam ended without agreement. Amid the rising tensions, North Korea has carried out several weapons tests. 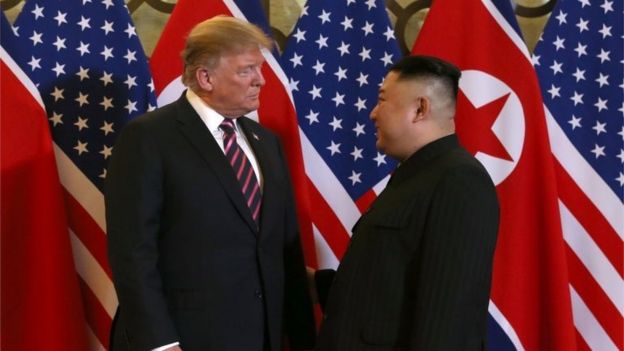 Earlier this month, the regime tested several short-range missiles, launching them from the Hodo peninsula in the east of the country.

Neither violates North Korea’s promise not to test long-range or nuclear missiles. Yet, they are likely to cause unease in Japan.

“While cooperating closely with the US and other related countries, we are planning to tackle this appropriately by strengthening enforcement of related UN Security Council resolutions,” he said.

North Korea fired a number of missiles over Japan in 2017, leading Mr Trump to tell Mr Abe his country could intercept missiles “if necessary”. 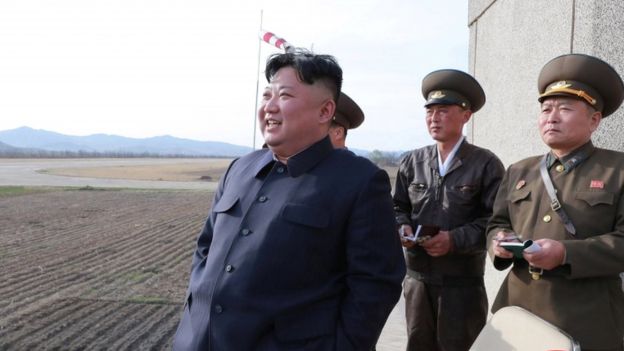 Kim Jong-un held talks with the US president in February

Why is Trump in Japan? The US president is there to discuss trade and security issues. North Korea’s missile tests and nuclear programme are expected to be at the top of the agenda.

Japan is considered to be one of America’s most important allies, for security and economic reasons, and Mr Trump has sought to strengthen the relationship, making regular diplomatic trips to meet Mr Abe.

Their shared love of golf is one way they have bonded. They teed off on Sunday for a round at the Mobara course in Chiba.

Aside from golf, Mr Trump will attend the final day of the sumo “basho” or tournament and meet Japan’s new emperor, Naruhito. He will be the first foreign leader to meet the new emperor, who ascended the Chrysanthemum Throne at the beginning of the month.

Mr Trump believes their trading relationship is unfair. He told business leaders in Tokyo on Saturday that “Japan has had a substantial edge for many, many years”.