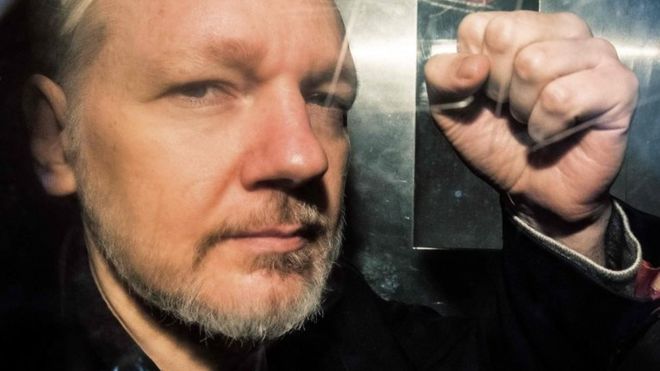 The US justice department has filed 17 new charges against Wikileaks co-founder Julian Assange, who is facing extradition from the UK.

The latest charges accuse him of receiving and unlawfully publishing the names of classified sources.

He was previously charged last month with one count of conspiring with ex-intelligence analyst Chelsea Manning to gain access to the Pentagon network.

Assange is serving a jail sentence in the UK for jumping bail.

It was while he was on bail facing sexual assault allegations in Sweden that he sought asylum in the Ecuadorean embassy in London in 2012. He has always denied the accusations.

The 47-year-old was arrested on 11 April after Ecuador abruptly withdrew his asylum, and later jailed for 50 weeks for skipping bail.

What are the US charges?

The new indictment accuses Assange of violating the US espionage act by publishing classified military and diplomatic documents in 2010.

It said Assange had “repeatedly encouraged sources with access to classified information to steal and provide it to Wikileaks to disclose”.

Once Manning started sharing such material, Assange, it said, encouraged her “to continue her theft of classified documents and agreed to help her crack a password hash to a military computer”.

Assange “revealed the names of human sources and created a grave and imminent risk to human life” – including the names of local Afghans, Iraqis, Chinese and Iranians.

Many of the charges would carry jail terms of five to 10 years, meaning that he could face many decades in prison if convicted.

Wikileaks hit back after the announcement, tweeting: “This is madness. It is the end of national security journalism and the first amendment,” which guarantees free speech.

What is unusual about the charges is that most cases involving the theft of classified information have targeted government workers and not the people who published it, correspondents say.

Assistant Attorney General John Demers said the department took “seriously the role of journalists in our democracy” but that Assange was “no journalist”.

“Indeed, no responsible act of journalism would purposely publish the names of individuals he or she knew to be confidential sources in war zones, exposing them to the gravest of dangers,” he added.

What is his situation?
Australian-born Assange is currently being held at Belmarsh prison in London.

Swedish authorities are also seeking his extradition after reopening an investigation into a rape allegation against him made in 2010.

The decision as to which of the two countries take precedence in their requests will be made by UK Home Secretary Sajid Javid.

What has happened to Manning?

Manning was found guilty in 2013 of charges including espionage for her role in leaking secret military files to Wikileaks, but her 35-year sentence was later commuted by then-President Barack Obama in 2017. 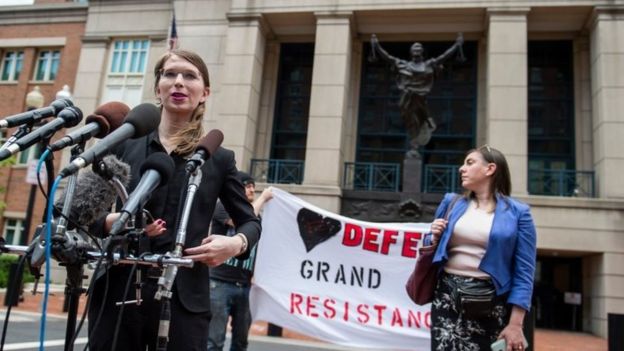 The leak was one of the largest breaches of classified material in US history.

She is currently back in jail after refusing to testify to a grand jury that is investigating Wikileaks.