President Emmanuel Macron of France has urged “swift clarification” on Brexit after the resignation of UK Prime Minister Theresa May.

He stressed the need to “maintain the smooth functioning of the EU”, as the European Commission ruled out any change to Brexit policy. Mrs May is stepping down after failing to get her Withdrawal Agreement through Parliament three times. Mr Macron also joined EU leaders in paying tribute to Mrs May’s “courage”.

The Withdrawal Agreement was reached with the EU in November after arduous negotiations.

What are EU leaders saying?

The European Commission made clear it would work with Theresa May’s successor but that there would not be any changes to the Withdrawal Agreement.

“The president very much liked and appreciated working with Prime Minister May and, as he has said before, Theresa May is a woman of courage for whom he has great respect. 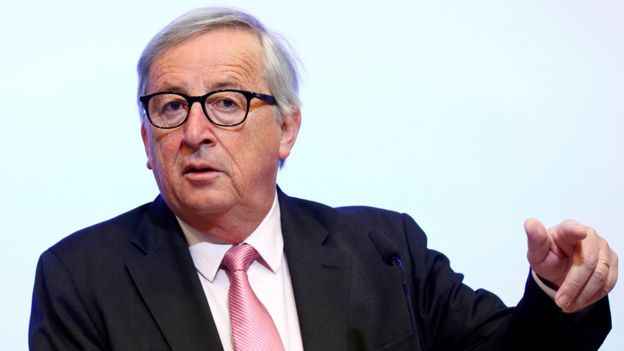 “He will equally respect and establish working relations with any new prime minister, whoever they may be, without stopping his conversations with Prime Minister May. And our position on the Withdrawal Agreement and anything else has been set out. There is no change to that.”

In an interview before Mrs May’s resignation, Mr Juncker asked: “How could anybody else achieve what she couldn’t?”

The UK’s previous prime minister, David Cameron, clashed with Mr Juncker over the EU budget and other issues before arguing – unsuccessfully – to stay in the EU in the 2016 referendum.

Reflecting on that vote, Mr Juncker told the German public broadcaster ARD: “If you tell people for 40 or 45 years ‘we’re in it, but not really in it’, we’re part-time Europeans and we don’t like these full-time Europeans, then you should not be surprised if people follow simple slogans once they’re asked to vote in a referendum.”

He also accepted that the EU had “failed” by not adopting “the position that was necessary”. “Abstention is not a position,” he said. 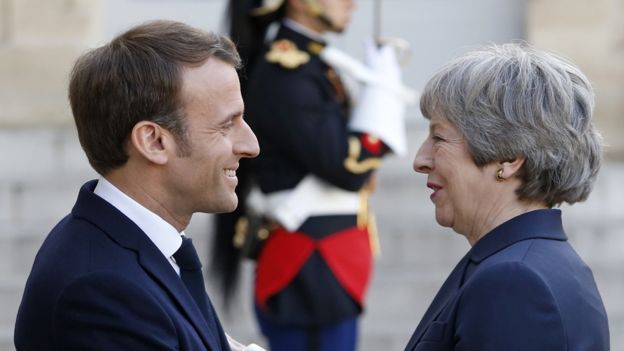 A statement from the French president’s office said: “The principles of the EU will continue to apply, with the priority on the smooth functioning of the EU, and this requires a rapid clarification.

“At a time of an important choice, votes of rejection that do not offer an alternative project will lead to an impasse.”

In other EU reaction:

The EU establishment, like everyone, marvelled at Theresa May’s amazing ability to stay standing.

“If you’re a lion tamer you’re going to get bitten,” said one diplomat this morning. They were grateful that she respected the rules of the negotiations and didn’t rock the boat on other EU business.

EU leaders would bolster her position when things got tough – a photo-op here, some complimentary words there. But they weren’t prepared to compromise on the big one – the backstop to prevent a hard border between Ireland and Northern Ireland – because they think it’s already a compromise.

They think it took her too long to realise – or admit – that the UK’s economy required something that looked like a customs union. And they were amazed at her regular misreading of her own party and parliament.

EU Brexit negotiators have been war-gaming potential replacements for weeks and the scenario that seems to have been considered most seriously is a Prime Minister Boris Johnson asking for changes to the backstop that cannot be granted, and then blaming the EU.

But there’s been no formal discussion about what comes next. That will probably happen at a summit of leaders next week, supposedly about appointments to the EU’s top jobs and now inevitably about Brexit.

What happens to Juncker himself?

Mr Juncker will be replaced by a new Commission chief – not yet chosen – in November. New leaders will be chosen for all the EU institutions after the 23-26 May European elections.

He belongs to the centre-right European People’s Party, the bloc which won the last European elections in 2014.

He voiced hope that the UK would leave the EU by 31 October – the new deadline set by EU leaders. The UK did not meet the planned 29 March deadline as exit terms had not been ratified.

Mr Juncker denied that the UK Brexit vote was a personal defeat for him.

“Nobody listens to me in Britain anyway. They should, but they don’t. There was nobody in Britain who confronted the lie with the incontrovertible truth,” he said.

This entry was posted in News and tagged european-commission, france, president-macron, prime-minister. Bookmark the permalink.