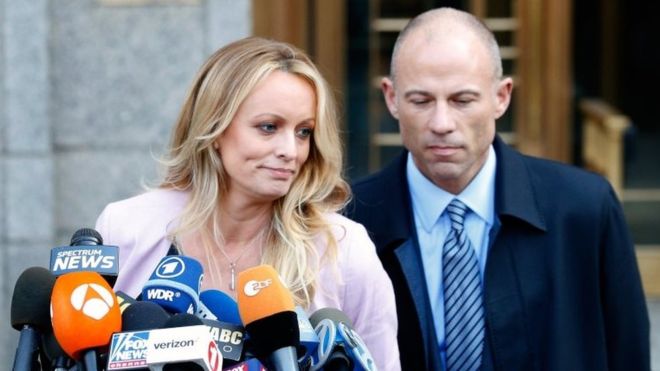 They say Mr Avenatti, 48, took the money Ms Daniels was supposed to get from a book deal.

The high-profile lawyer already faces a number of fraud and embezzlement charges, including accusations of attempting to extort Nike.

He has denied all the allegations.

The indictment announced by New York prosecutors on Wednesday said Mr Avenatti was accused of using “misrepresentations and a fraudulent document purporting to bear his client’s name and signature to convince his client’s literary agent to divert money owed to Avenatti’s client to an account controlled by Avenatti”.

“Avenatti then spent the money principally for his own personal and business purposes,” it adds.

Writing on Twitter, Mr Avenatti said: “No monies relating to Ms Daniels were ever misappropriated or mishandled. She received millions of dollars worth of legal services and we spent huge sums in expenses.”

What other charges does he face?

The latest charge sheet revealed that Mr Avenatti had been hit with extortion charges relating to the Nike case, which was originally announced in March when he was arrested.

He has been accused of trying to blackmail the global sporting products maker out of more than $20m by threatening to use his profile to inflict reputational harm on the firm.

He also faces dozens of charges in Los Angeles of embezzling money from clients and defrauding a bank.

If convicted on all charges, he could face hundreds of years in prison.

A frequent guest on TV news and talk shows, Mr Avenatti emerged as a fierce critic of Donald Trump and said at one point he was considering running for president in 2020.

Michael Avenatti: What you need to know

The president has denied having an affair.

The case was struck down by a US federal judge in March.