A tornado has killed three people in the US state of Missouri, including an elderly couple who were hurled hundreds of feet from their home.

All three fatalities were in Golden City. Another tornado carved a three-mile swathe of destruction through the state capital, Jefferson City.

It brought the death toll from US Midwest twisters this week to seven.

Missouri saw two other weather-related deaths earlier this week, along with one in Oklahoma and another in Iowa. 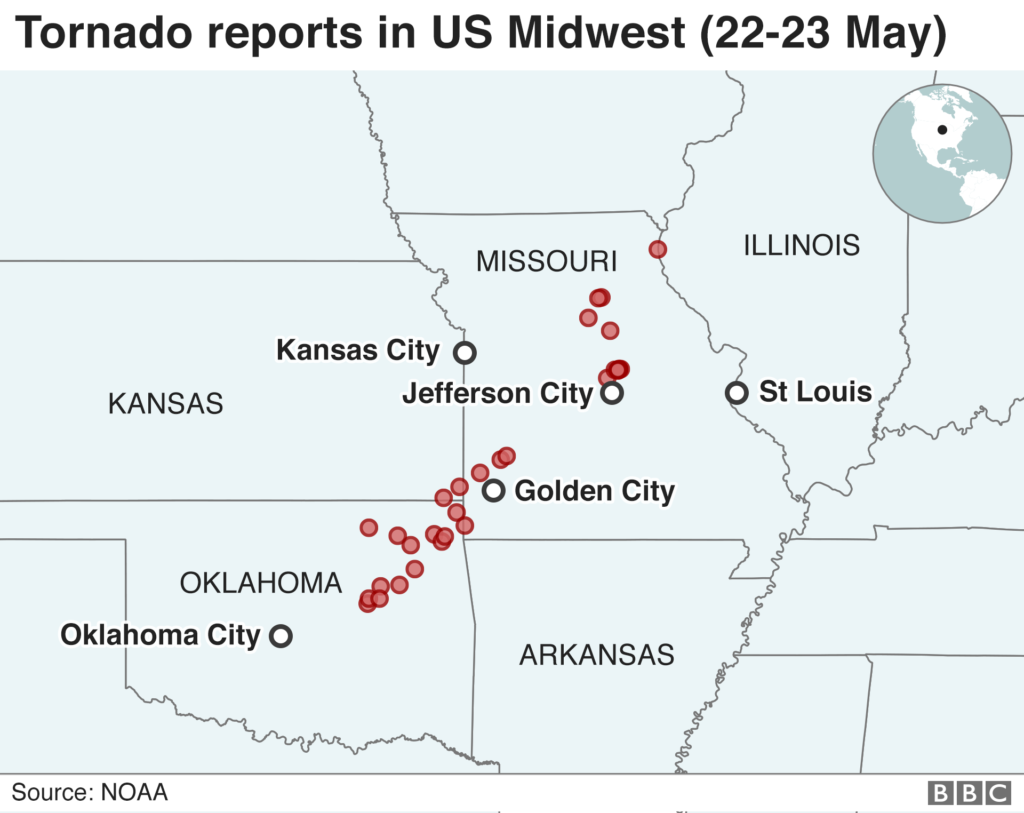 Missouri State Highway Patrol identified the third victim as Betty Berg, 56, who died when her mobile home was destroyed.

Jefferson City residents were urged on Thursday to stay at home due to dangerous road conditions in the aftermath of the storm, including toppled trees and power lines.

Earlier the US National Weather Service (NWS) issued a rare “high warning” for severe storms in the region.

It said at least 29 tornadoes had been reported in the last 24 hours and more than 170 since Friday.

President Donald Trump expressed his condolences on Twitter, saying: “Our hearts go out to the people of Missouri as they woke up to assess the damage from storms. You are strong and resilient, and we are here to assist.”

The NWS described the tornado over Jefferson City as “large and destructive”.

Missouri Governor Mike Parson told reporters on Thursday morning that “there was a lot of devastation throughout the state”.

LOOK & LISTEN: Terrifying video- especially at the 25 second mark. This is an apparent tornado near Jefferson City, Missouri overnight. There are reports that three were killed and others are trapped in their homes with heavy damage reported. https://t.co/Y0KEYEmrcC #HTownRush pic.twitter.com/kxo6TjFQ4p

According to the governor, some Jefferson City residents were still trapped in the rubble, and emergency teams had been dispatched across the capital city. At least 20 people have been taken to hospital by emergency services.

On Wednesday night, emergency sirens were activated in Jefferson City – home to around 43,000 people – and the storm was spotted 20 minutes later.

“When it hit… it felt like an earthquake,” local resident Cindy Sandoval-Jakobsen told CNN.

A preliminary survey by the NWS found the tornado was likely an EF3 at its worst. The “Enhanced Fujita scale” details highest wind speeds for twisters based on the damage caused. 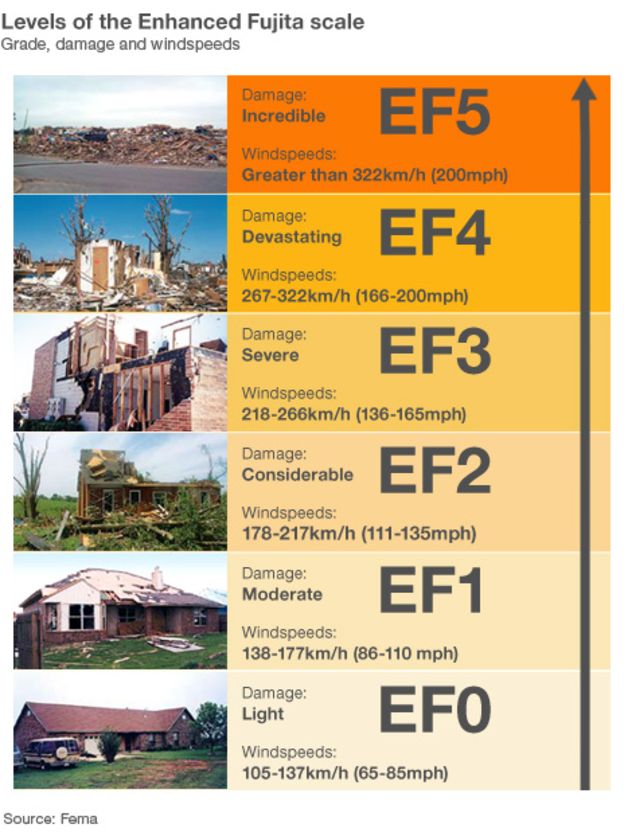 No deaths have been reported in the city, but images on social media showed buildings ripped apart and cars tossed around.

Nearly 6,000 are still without electricity, the Ameren electric company reports.

@MSHPTrooperF is also in Eldon assisting Eldon Police Department and Miller County Sheriff Department after tonight’s tornado. If you are NOT affected, please stay clear of the area and let first responders do their jobs. #MoWx pic.twitter.com/GxlNmZ3xtl

“We need people who are not affected to stay out of those areas.”

Emergency officials have warned of flash flooding, and police in Tulsa, Oklahoma, have advised residents living near Keystone Lake dam to begin evacuating

Wednesday’s storms struck on the eighth anniversary of a tornado that killed 161 people in Joplin, a city in southeast Missouri.

More storms are expected to hit the Midwest on Thursday and Friday.

The NWS warned that parts of Missouri would continue to see “multiple rounds of strong to severe storms” through the weekend that could cause rivers to rise.

What do we know about the other victims?