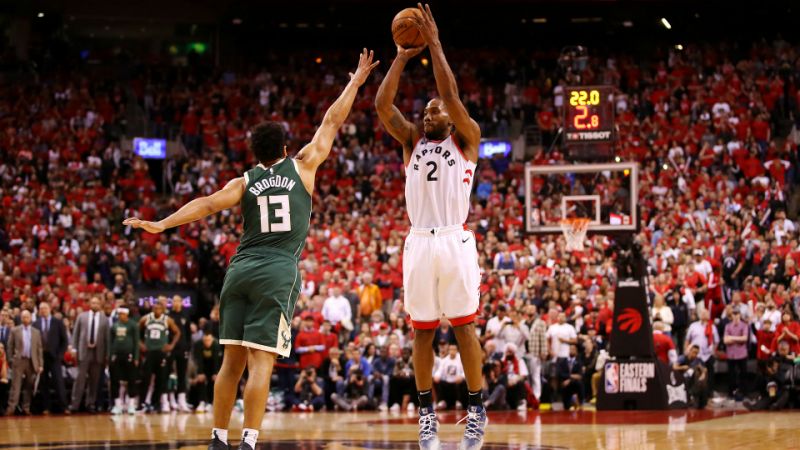 TORONTO — Mike Budenholzer wasted no time in identifying the Milwaukee Bucks’ fatal flaw Tuesday night in their Game 4 loss to Toronto, a defeat that essentially cut the Eastern Conference finals now to a best-of-three mini-series.

“I think this is probably the first night defensively where I don’t feel like we were close to where you need to be to give ourselves a chance,” Budenholzer said.

He didn’t specify whether he meant against this particular opponent, so far in the 2019 postseason or across the expanse of the 95 games the Bucks have played since late October.

So let’s just say they were shoddy and haphazard enough in falling 120-102 at Scotiabank Arena to have undermined all three.

Limiting this to the playoffs, the Bucks’ work defensively ranked as their low point in 13 games against Toronto, Boston or Detroit. Their 125.0 defensive rating (points allowed per 100 possessions) was their worst by a wide margin; it had been 110.9 when they lost to the Celtics in Game 1 of the conference semifinals.

Meanwhile, the Raptors looked awfully prosperous at the Bucks’ expense. It was Toronto’s second-best night of the postseason in offensive rating, in offensive rebound percentage and in assist percentage (78.0).

None of the above is supposed to happen against the NBA’s top-ranked defense overall in 2018-19.

“A little bit of everything,” was how forward Nikola Mirotic explained the Game 4 unraveling. “Rotation. Defensive transition as well — we didn’t show the crowd as we usually do. They beat us on the boards tonight.”

Said backup guard George Hill: “They’re getting a lot of open looks. They’re driving the ball hard. They’re moving the ball very well. We’ve just got to match their energy and match that style of play.”

There are two sides to these coins, and the Bucks were quick to credit Toronto’s players for their offensive prowess. The Raptors’ three reserves in coach Nick Nurse’s eight-man rotation — Serge Ibaka, Norman Powell and Fred VanVleet– outscored the four bench players in Budenholzer’s current rotation, 48-19.

Having more scorers in rhythm stretched Milwaukee’s defense in ways that the Bucks, reduced to Giannis Antetokounmpo and Khris Middleton as a two-headed threat, did not. And missing more than 70 percent of your 3-pointers — the Bucks have bricked 115 of 164 in the series — can fuel the other team’s transition game.

“I’m not sure a lot of [Toronto’s big shots] were necessarily Kawhi Leonard-centric,” Budenholzer said.

Said Middleton, who had his finest offensive game of the series with 30 points but was just as culpable as his teammates defensively: “We didn’t really take away one thing from them. For the most part, they got anything they wanted, from the paint to the blocks to the mid-range to the 3s.”

Milwaukee’s defensive formula all season has been to limit the opponents’ success near the rim, challenge them at the arc and limit their trips to the line. Well, the Raptors matched the Bucks in paint scoring with 40 points. They outscored their guests by nine points on 3-pointers. And they shot 27 free throws, making 24.

All against a defense that had led the NBA in opponents’ field-goal percentage (43.3) and in fewest points allowed on free throws (15.1 per game).

It might be natural for foul totals to creep up in the playoffs, when teams get more physical and no one wants to yield easy buckets. It’s understandable, too, that a team playing from behind most of the night can get desperate simply to end the other guys’ possession and get the ball back, which also leads to fouls.

“There are some that are going to happen, but there also are some fouls we need to be smarter about,” guard Pat Connaughton said. “I mean, try to be better. Get there earlier. We have to be a step quicker. We have to do a few things smarter when it comes to reaching. Just overall be a little bit more mentally tough.”

Connaughton played fewer than 14 minutes. But he was part of the meltdown too, with the Bucks outscored by 16 in his limited appearance. He and several teammates dismissed the possibility — an ominous one, frankly — that the Raptors have unlocked the Bucks’ defensive code and now can attack them at will.

But that doesn’t mean there are leaks in need of plugging, pronto.

“Part of it starts with just making sure we stick to our core values,” Connaughton said. “There were times we had a few breakdowns where they ended up getting layups. We’ve been a great defensive team all year and one of the reasons is because we don’t allow layups. We have each other’s back, we scramble, things of that nature.

“It seemed like they had a few open layups. They had a few wide-open 3s. When we’re at our best, we’re putting pressure on everybody. We’re scrambling. It’s not gonna be perfect [but] our strength is the athleticism and tenacity we play with on the defensive end. Tonight it seemed like they ended up with a few looks that we don’t usually allow.”

Time and time again, the Raptors stayed patient to keep the ball moving in search of good, better and best shots. The Bucks also got caught chasing the ball, or ganging up two or three defenders on the ball handler until he dropped a little pass to an open mate.

“And it seemed there were a few times where they found the open guy after we collapsed on defense,” Connaughton said. “When we were able to run him off, they found the next guy. That’s when there wasn’t another [Bucks defender] to go. When we are at our best, we have more communication. We have a better sense of who’s flying at who. We get back in the play.”

Connaughton spoke as well about Raptors blowing by him and the Bucks’ other on-ball defenders. If it wasn’t Kyle Lowry or VanVleet, it was Leonard slipping away from Middleton to receive a bounce pass for a layup or dunk.

“We’ve got to do a better job of keeping guys out of the lane so we don’t have to help as much,” Connaughton said. “But when we do have to help, we have to make sure we’re scrambling as well as we have all season.

“There are plenty of clips throughout the season where we’ve had a guy running someone off the [3-point] line, and then all of a sudden he’s got a contest three passes later when it’s swung on the wing. That’s what we’ve got to get back to.”

That’s what the Bucks’ season might come down to.