Aaron Rodgers not fan of 'Game of Thrones' finale 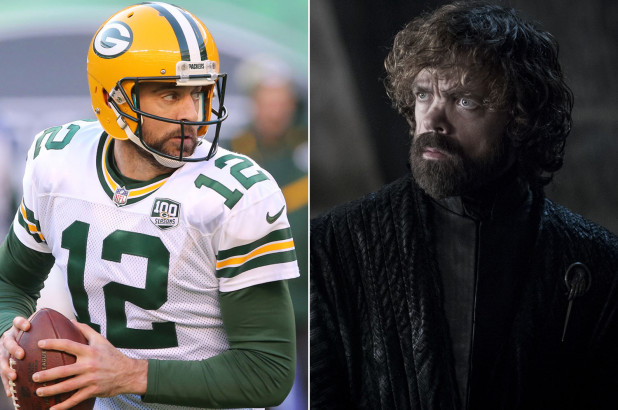 Rodgers appeared briefly in the fifth episode of the recently concluded series, which was based on George R.R. Martin’s fantasy novel epic, and many speculated on what role he played, causing wrong guesses. The Packers quarterback made sure the popular deductions were wrong.

“I wasn’t the guy that got burned up,” Rodgers told reporters, via Stephen Watson of WSIN 12 News. “And I’m disappointed in every person who would actually say that was me because if you watched that person run, they’re a total non-athlete. Total non-athlete.”

OK, what about the other popular opinion surrounding Rodgers playing an archer?

“I wasn’t the archer, either,” Rodgers said. “Although that person definitely looked like me.”

Rodgers said it was “true” when asked about the bell tower scene, also a popular take on his appearance. He was then provided an opportunity to give an opinion on the show’s ending, which has caused plenty of unfavorable opinions on social media and message boards.

The Packers’ signal-caller didn’t hesitate to join the fray when asked if he liked the ending.

“No,” Rodgers said emphatically. “I love the show and it was a great 10 years, but no. I mean, you come down to the end and Tyrion says the person with the best story is Bran, who by the way three episodes ago said he wasn’t Bran Stark anymore?

Rodgers then provided a take on who should’ve claimed the Iron Throne, which was established as the ultimate prize throughout the eight seasons of the TV show and novels.

“I think Dany should’ve been on the throne,” Rodger said of actress Emilia Clarke’s portrayal of Daenerys Targaryen, who was a main character throughout the series before being killed off in the final episode.

Rodgers’ view on the Mother of Dragons was quickly followed by how he viewed the show’s eventual surprising ruler in Bran.

“Here’s the thing, though, here’s my last theory,” Rodgers said. “If Bran, the three-eyed raven who’s all about the health of the realm, let’s think about what he did.

“Basically wanted the throne the whole time because he’s the one that told the Starks knowing that Sansa would tell Tyrion, knowing that Tyrion would talk to Varys, knowing they’d scheme for Dany’s death, knowing that would piss her off, which led her to be the Mad Queen. So, he the entire time had to set this whole thing up? And at the end, he goes, ‘I don’t want to be king, but why did I travel all this way to be here?’ No.”

Rodgers brings up arguably one of the biggest issues a lot of die-hard fans of the TV show and books are having difficulty digesting.

The writing on the TV side enjoyed seven strong Emmy award-winning seasons, but the final six episodes appeared rushed as show runners D.B. Weiss and David Benioff attempted to finish off storylines with little space to operate.

Making matters worse, Weiss and Benioff didn’t have source material to rely on when considering the TV version passed Martin’s books after Season 5. The scenario left the televised version at the mercy of creative license for writers to do as necessary to tie up various plots.

While it isn’t known if Rodgers signed the petition, it is apparent he didn’t agree with the show’s ending and also took issue with how Weiss and Benioff, both of whom are handling the script for an unnamed Star Wars movie, finished off a very popular TV show.

“I love the opportunity to be on the show, which most people probably don’t think I was but I was there,” Rodgers said. “I love the show, but the writers were off doing Star Wars. So, I think they might have been a little busy this last season.”