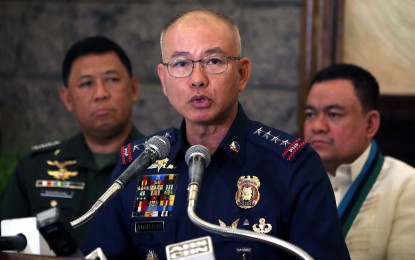 THE Food and Drug Administration (FDA) on Tuesday, May 21, announced that it will be revoking the Certificate of Product Registration (CPR) of brands deemed as “fake” vinegar.In a statement,

THE conduct of special elections in a barangay in Jones town in Isabela on Monday, May 20, was generally peaceful, a police official said on Tuesday, May 21.

PNP spokesperson Colonel Bernard Banac said no untoward incident was recorded in Barangay Dicamay Uno during the conduct of special elections there.

He said vote counting machines and other election paraphernalia used for the special elections were safely transmitted to the Jones Municipal Hall around 7:10 p.m. Monday.

The Commission on Elections (Comelec) held a special election for local posts in the said barangay after armed men torched two vote counting machines there in the morning of May 14, a day after the national and local elections.

The suspects intercepted the truck carrying election canvassers and election paraphernalia in Barangay Sta. Isabel on the way to the Jones municipal hall.

They took the two vote counting machines and ballots and burned them before fleeing.

One of the perpetrators was arrested while the other surrendered after learning that he was being tracked by the police.

Police said the suspects were positively identified by the witnesses. However, they denied involvement in the incident.

The town of Jones was among the election hotspots placed under Category Red due to intense political rivalry.

It has 42 barangays with over 30,000 registered voters. Vying for the top local government post were incumbent Mayor Leticia Sebastian and businesswoman Melanie Uy. (SunStar Philippines)