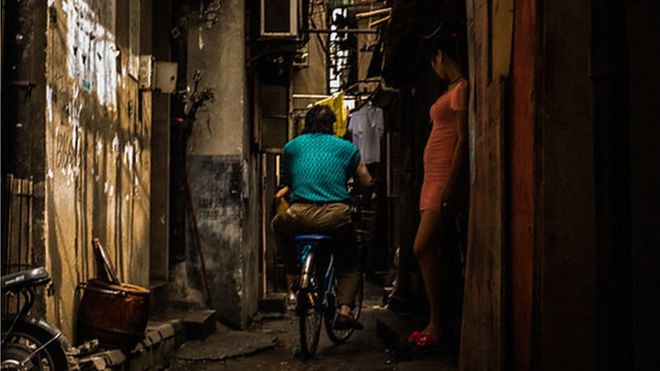 Thousands of North Korean women and girls are being forced to work in the sex trade in China, according to a new report by a London-based rights group.

They are often abducted and sold as prostitutes, or compelled to marry Chinese men, says the Korea Future Initiative.

The women are often trapped because China repatriates North Koreans, who then face torture at home, it says.

“Victims are prostituted for as little as 30 Chinese yuan ($4.30; £3.40), sold as wives for just 1,000 yuan, and trafficked into cybersex dens for exploitation by a global online audience,” the report’s author Yoon Hee-soon said.

They are coerced, sold, or abducted in China or trafficked directly from North Korea. Many are sold more than once and are forced into at least one form of sexual slavery within a year of leaving their homeland, it adds.

Many are enslaved in brothels in districts in north-east China with large migrant worker populations.

The girls – some as young as nine – and women working in the cybersex industry are forced to perform sex acts and are sexually assaulted in front of webcams. Many of the subscribers are thought to be South Korean.

Women forced into marriage were mostly sold in rural areas for 1,000 to 50,000 yuan, and were raped and abused by their husbands.

The group collected its information from victims in China and exiled survivors in South Korea.

One woman, named as Ms Pyon from Chongjin City, North Korea, is quoted as saying in the report:

“I was sold [to a brothel] with six other North Korean women at a hotel. We were not given much food and were treated badly…After eight months, half of us were sold again. The broker did bad things to me.”

“When I arrived [at the new brothel] I had bruises on my body. [The broker] was beaten then stabbed in the legs by some members of the gang.”

Another, Ms Kim, said: “There are many South Koreans [in Dalian, China]…We put advertising cards under their doors [in hotels]…The cards are in the Korean-language and advertise what we offer…We are mostly taken to bars [by the pimp].

“South Korean companies want [North Korean prostitutes] for their businessmen…Prostitution was my first experience of meeting a South Korean person.”