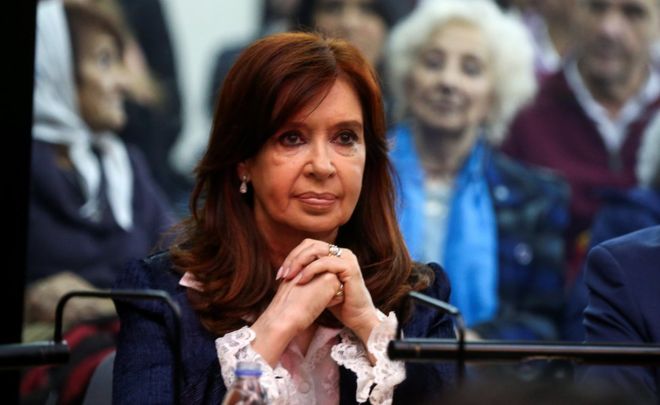 Ms Fernández is accused of accepting bribes from construction firms in exchange for lucrative government contracts while in power.

This trial, the first of 12 cases Ms Fernández faces, comes days after she announced she was running for office.

Posting on Twitter ahead of the trial, she dismissed the accusations as a politically motivated “smokescreen”.

“Trials must seek the truth,” she wrote. “But it doesn’t look like this is going to happen here.”

Ms Fernández, a left-leaning populist, is standing for the vice-presidency in the country’s national election on 27 October.

Her attendance at the opening hearing at the city’s Comodoro Py court was mandatory, but she will be able to send a representative to the follow-up hearings held every week.

Demonstrators gathered outside the courthouse in Buenos Aires on Tuesday to shout slogans in support of the former president.

What are the charges?

She is now accused of having given preference to her friend, a businessman called Lazaro Baez, for road construction contracts in southern Argentina’s Santa Cruz province during that time.

She said on Twitter the trial was to “distract Argentines… from the dramatic situation in which our country and our people live” – referring to Argentina’s fragile economy.

“It is a new act of persecution, with a single objective: to place a former president opposed to this government on the defendants’ bench during a full presidential campaign,” she wrote.

How is she polling?

High inflation and a weak Argentine peso have led to increasing social unrest and unemployment in the country.

As a result, and despite the accusations against her, Ms Fernández continues to poll favourably as Argentines live through the austerity measures implemented by President Mauricio Macri. 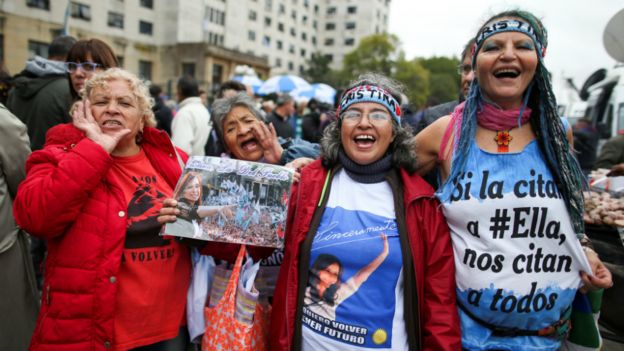 Supporters of Ms Fernández gather outside the courtroom

Ms Fernández was expected to stand as a presidential candidate in the election, but on 18 May announced she would run for vice-president instead.

She will run alongside her former chief-of-staff, Alberto Fernández, who is seeking the presidency.

“I have asked Alberto Fernández to lead a team that includes both of us, him as the presidential candidate and me as candidate for the vice position,” she said in a nearly 13-minute long video on her official Twitter account.