Raptors simply being outpaced by Bucks in conference finals 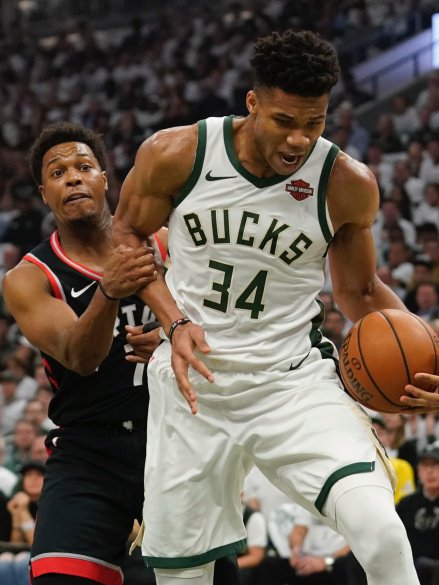 Milwaukee Bucks’ Giannis Antetokounmpo is fouled by Toronto Raptors’ Kyle Lowry during the first half of Game 1 of the NBA Eastern Conference basketball playoff finals Wednesday, May 15, 2019, in Milwaukee. (AP Photo/Morry Gash)

The Toronto Raptors are being outplayed.

And through two games of the the Eastern Conference finals, the Milwaukee Bucks clearly are winning the battle of pace. With each team averaging 102 possessions per game, they’ve stretched a Raptors roster that averaged between 95 and 96 possessions per game in each of the first two rounds.

On the defensive end of the floor, they’ve allowed just 96.3 points per 100 possessions in the five slower-paced games and 105.6 in the nine others. The context in those numbers, of course, is that three of the five slow-paced games were against the Orlando Magic’s 22nd-ranked offense, while seven of the other nine have been against two top-10 offenses in Philadelphia and Milwaukee.

The Bucks rank second offensively in the playoffs, having scored the same number of points per 100 possessions (113.5) as they did in the regular season, when they ranked just ahead of the Raptors in offensive efficiency.

Toronto was actually the most efficient regular-season team in transition, averaging 1.19 points on those possessions, according to Synergy play-type tracking. Kawhi Leonard and Pascal Siakam scored 1.31 and 1.26 points per possession in transition, respectively. Those were the fourth- and seventh-best marks among 101 players who averaged at least two transition possessions per game in the regular season.

In this series, the Raptors don’t want to play slow and deliberate. Against the league’s No. 1 defense, they have to seek out scoring opportunities, and walking the ball up the floor in order to minimize possessions would waste precious seconds off the shot clock. Not to mention allow the Bucks to set up their defense, and put additional pressure on every action and every pass in the half-court.

Kyle Lowry has looked to push the ball up the floor against Milwaukee, off of both misses and makes. But the Bucks have simply been more prolific and efficient in transition. According to Second Spectrum tracking, the Raptors have outscored the Bucks by 10 points on field goals in the last 18 seconds of the shot clock, but Milwaukee has outscored Toronto, 49-26, on field goals in the first six seconds of the shot clock.

The Raptors’ issues have been with both the volume and accuracy of their shots early in the clock. In Game 1, they took 20 shots in the first six seconds, but shot just 5-for-20, in part because 12 of the 20 shots came from three-point range. They got early offense, but not early offense at the rim. In Game 2, the Raptors took just eight of their 87 shots in the first six seconds of the shot clock, while the Bucks attempted twice as many.

And pace isn’t just about shots early in the clock. It’s also about the quickness with which actions are run in a half-court offense.

“A lot of people kinda tend to think [playing with pace] means playing super fast, up the floor and shooting quickly,” Nick Nurse said during the Philadelphia series. “We talked about our pace in the halfcourt. I think the games where the shots were better and going in … our pace in the halfcourt was crisper. It was more speed of cuts, which translated to a little better rhythm, which translated to a little better shots.”

Both of these teams are defending similarly, putting an emphasis on protecting the basket, which means that paint attacks are met with multiple defenders. The result is ball movement and defensive rotations. And in regard to ball and player movement, the Milwaukee offense has played with more pace.

Through the first two games, the Bucks have averaged 348 passes and 11.6 miles traveled per 24 minutes of possession. Toronto, meanwhile, has averaged 322 and 11.1. Sure, the Raptors have scored more points from the field in the last 18 seconds of the shot clock, but they haven’t been nearly sharp enough to make up for the differential in transition.

The Raptors don’t want to turn the conference finals into a track meet. But if they’re going to come back in this series, it seems they’ll have to play with more pace offensively, while preventing the Bucks from doing the same. It’s a tough needle to thread.

John Schuhmann is a senior stats analyst for NBA.com. You can e-mail him here, find his archive here and follow him on Twitter.

The views on this page do not necessarily reflect the views of the NBA, its clubs or Turner Broadcasting.