'He makes us go': Green elevates Warriors to 3-0 series lead 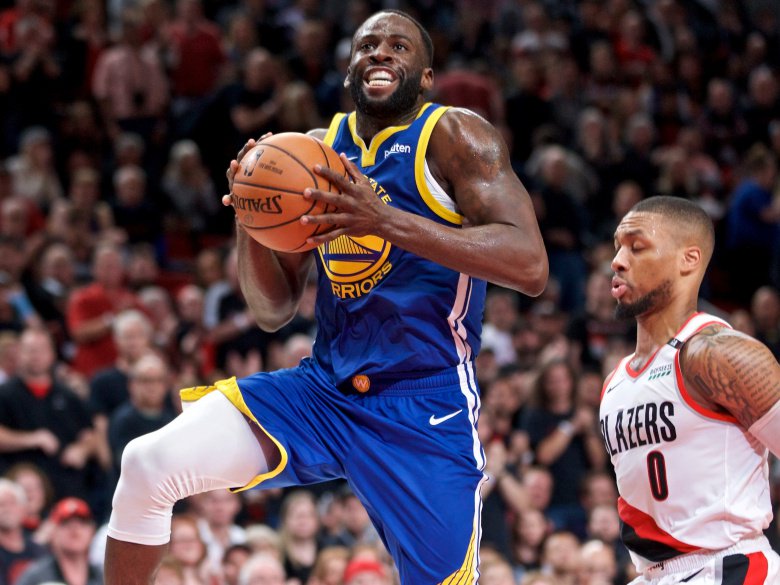 PORTLAND, Ore. — There is nothing Draymond Green failed to do Saturday (Sunday, PHL time) when he helped push the Blazers to the edge and the Warriors to the verge. Here is the checklist of his duties: Dribbler, pace-setter, rescuer, shooter, director, shot blocker, shot-caller and the one that probably escaped most witnesses, psychiatrist.

Yes, Dr. Dray suddenly offered his services and sofa when poor Jordan Bell blew a breakaway dunk during a critical moment, just as the Warriors were in the process of flipping an 18-point deficit during their 110-99 victory in Game 3 of the Western Conference Finals.

Bell immediately hung his head as he returned downcourt, and seconds later at the next timeout, he slowly headed toward the Warriors bench with slumped shoulders. But who intercepted him before he could take another step? That’s right, it was Green, famously known for his cool and soothing words in times of crisis. (OK, put the laugh track here.)

The type of leader every team needs 🙌pic.twitter.com/Tr3JblKAyX

“I knew he wasn’t going to lecture me or anything like that,” said Bell. “He just told me that everybody misses dunks, that I shouldn’t worry about it, that mine happened to be an open one, and to keep my head into the game because I’d get another chance.”

“I was down here,” he said, lowering his hand, “and he lifted me up here.”

And wouldn’t you know, Bell got that next chance minutes later. This time, the dunk was thrown down ferociously and completed with a chin-up that belonged at LA Fitness. We can give Green credit for the 20-point, 13-rebound, career playoff-high 12-assist triple double, and we can give Green partial credit for that second-chance slam, too.

The man was that multi-layered.

“I don’t even know what to say about Draymond,” said Warriors coach Steve Kerr.

Once again, Green demonstrated his value to the Warriors in these playoffs with a magnificent all-around game. He left fingerprints all over the Moda Center court and various Blazers’ efforts. He was there for the Warriors when nothing else worked, and he was there for the Warriors when everything finally began to click and they needed a finishing touch. His desire and will do not show up directly on the stat sheet, yet those elements made the victory possible. The Warriors won for the fourth straight game without Kevin Durant and are one more away from reaching the NBA Finals for the fifth straight year.

It makes you wonder: As great as Durant is, would the Warriors be more vulnerable if it was Green who were out with a calf strain instead?

That question stands valid because the Warriors lack anyone who does what he does. The energy, intensity, floor direction, ability to defend three and sometimes four different positions, as well as the rebounding were all apparent Saturday (Sunday, PHL time) and in heavy doses. They came alongside leadership, evidenced by Green giving Bell a pat on the back during that down moment.

Green played Game 3 as a blur, grabbing rebounds, pushing the ball up the floor, creating scoring chances for himself or his teammates and providing help defense that triggered the pace. Green was forceful because Steph Curry and Klay Thompson were 9-for-24 shooting in the first half, at times overwhelmed by the trapping Blazers defense.

So Green took it upon himself to make things happen and provide the foundation for a second-half comeback. The Golden State defense held Portland to 13 points in the third quarter, Curry had 11 points in the fourth quarter, and this series simply continued along the same path.

“He was the difference-maker,” said Blazers coach Terry Stotts. “His energy, the way he was pushing the ball, he kept them going. He makes his teammates better and defensively he’s all over the place. He impacted the game.”

In the third quarter, Green poked the ball loose from Damian Lillard for one of his four steals. At the time, the Warriors were down 12 and in dire need of a jolt. But here’s what was remarkable about the play. Not only did the 6’7″ Green stoop and strip one of the NBA’s most composed ballhandling point guards (although perhaps not in this series), but he also managed to search for and grab it while it bounced between him and Lillard, then dribbled downcourt without missing a beat.

The dexterity, quickness, daring and smarts sets Green apart from others who play his role, or at least try to emulate it.

Green is averaging 18 points, 12 rebounds and almost 10 assists across the last two games and those numbers barely tell the real story. It’s just heightened because of Durant’s absence. In those two games, the Warriors trailed Portland by 17 and 18 points and Green was the point man on the rally.

He says his main purpose is to give Thompson and Curry a breather from the load and responsibility. With the Blazers throwing traps at those two guards to limit their scoring, Green is forcing Portland to pay him respect. He is, in essence, breaking down Portland’s defense by pushing the ball and directing the attack.

“I know I have to be more aggressive,” he said. “I think it’s easy to get (Curry and Thompson) to take more shots, but we can’t put that much pressure on them, so I just take it upon myself to get the tempo where I want it and make plays for other guys as well.”

It was no coincidence that six Warriors off the bench managed to get at least one basket with Green directing traffic.

And Green managed to play such a high-energy game without making constant mistakes; he had only two turnovers in 38 minutes.

“He’s playing with force and he’s playing with discipline,” said Kerr. “He’s playing under control. He’s not letting anything bother him, like officiating, bad shots, he’s just moving on to the next play. From that standpoint, he’s as good as he’s ever been.”

This is the Draymond Green that makes the Warriors more than willing to put up with the occasional nonsense, mostly stemming from his short temper and low tolerance with the officiating yet also with teammates and coaches at times. The constant technical fouls, the early-season clash with Durant, the high maintenance that often comes with coaching him, those are all part of the package. Taken as whole, that package is more positive than negative.

And when there’s no negative, as it’s been through much of this postseason, the package is irresistible.

“It’s nothing new; I’ve seen him do this for seven years,” said Thompson. “I’m just so proud of Dray. He makes us go.”

There was no more positive reinforcement from Green than when he comforted Bell and told the young player to shake off a missed dunk seen by millions and laughed at by thousands inside Moda Center. Green gave Bell the encouragement needed to forget the embarrassment and maintain composure, which was important because Kerr kept Bell in the game.

That set Bell up to gain redemption. And the Warriors, after struggling through a sloppy start, to gain complete control of a series that could end Monday (Tuesday, PHL time) in a sweep.

“I’m one of the leaders of this team and in those situations you either go one of two ways. You’re either going to do your job and lift everybody up or you’re going to go the opposite way,” said Green.

And so Green, with passing, defense and pace-setting, is stamping his signature on this series. His floor direction is flawless. He hasn’t shown the ability to direct the Blazers right out of the playoffs, but that’s perhaps just a matter of time.

Shaun Powell has covered the NBA for more than 25 years. You can e-mail him here, find his archive here, and follow him on Twitter.

The views on this page do not necessarily reflect the views of the NBA, its clubs or Turner Broadcasting.