The Trump administration is preparing to send Central American migrants caught along the southern border to Border Patrol stations “across the entire nation,” according to a senior Border Patrol official who confirmed the plans Friday.

With more than 4,500 people being caught each day crossing the U.S.-Mexico border, the agency has run out of room at its Border Patrol facilities in the four border states. The agency has started looking at its facilities around the country, which are mostly along the northern border with Canada and coastal states.

That means states from Oregon to North Dakota to Maine may begin receiving planeloads of migrant families in the weeks to come. On Tuesday, Customs and Border Protection sent its first plane full of migrants from Texas to San Diego.

The official confirmed reports on Thursday that the Florida counties of Broward and Palm Beach are under consideration given the size and capabilities of Border Patrol stations in the South Florida region. But he did not say if the decision is final or when the flights would start.

Asked whether any federal funds would be provided to help local communities deal with the relocation of migrants, the CBP official on Friday said he was not “aware” of any such plans.

The CBP official, who spoke on the condition of anonymity to brief reporters on the agency’s internal discussions, said politics is not playing a role in its search for places to process and release migrant families despite President Donald Trump’s comments that he wants to send migrants to so-called “sanctuary cities” that do not fully cooperate with federal immigration officials.

“Due to the fact that Democrats are unwilling to change our very dangerous immigration laws, we are indeed, as reported, giving strong considerations to placing Illegal Immigrants in Sanctuary Cities,” Trump tweeted last month. 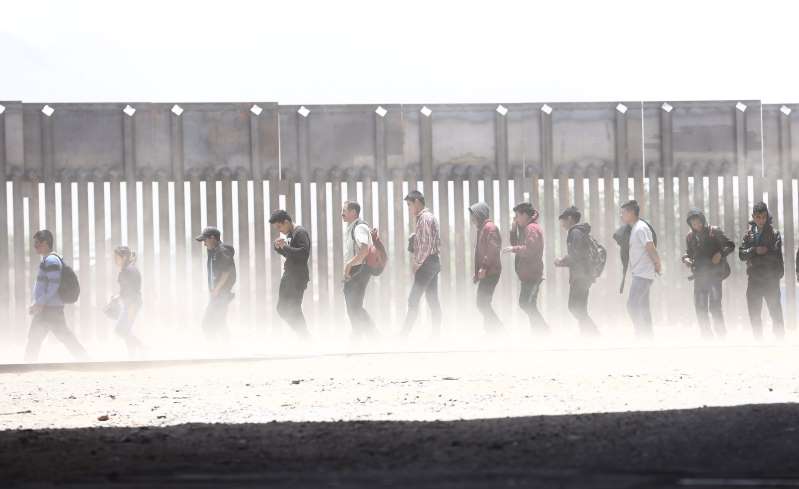 © Provided by USA TODAY, a division of Gannett Satellite Information Network, Inc. Migrants walk while being detained by Border Patrol after crossing to the U.S. side of the U.S.-Mexico border barrier on May 17, 2019 in El Paso, Texas.

Instead, the CBP official said they are searching only for Border Patrol facilities with the space and computer systems necessary to process large number of migrants each day. The official said the agency is not sending migrants to parts of the U.S. closest to their requested destinations, but making transportation decisions solely on each Border Patrol station’s ability to receive large numbers of migrants.

Palm Beach County Sheriff Ric Bradshaw said on Thursday that he was told by local Border Patrol officials to expect flights to start arriving in the area within two weeks, and that South Florida would receive about 1,000 migrants a month.

Officials in both counties complained that the transfers are coming with no apparent plan to house, feed, or care for the migrants after they’re released from custody.

Florida Gov. Ron DeSantis, a Republican and ardent supporter of Trump, said he didn’t know much beyond news reports about plans to release migrants in his state. But he said that if true, it would be a big problem.

“We cannot accommodate in Florida the dumping of unlawful migrants into our state. I think it will tax our resources, our schools, the healthcare, law enforcement, state agencies,” he said after a bill-signing ceremony Friday, according to the Miami Herald.

The CBP official could not estimate the average cost of each flight. But on Monday, Immigration and Customs Enforcement (ICE), which operates the flights, issued a public request for a contractor to handle up to 60,000 migrant transfers a year, with the vast majority of them (88%) being transfers by air.

Border Patrol has complained that its facilities have been overwhelmed by the record number of migrant families crossing the border, most of them requesting asylum to stay in the U.S.

Immigration and Customs Enforcement, which is responsible for interior immigration enforcement and has more detention space available, has also said it’s running out of space.

That led Border Patrol agents in March to begin releasing migrants directly into local communities, at bus stations, community shelters, churches and other places along the border. That’s been happening in Tucson since March.

CBP tried shuttling migrants between Border Patrol stations along the southern border, sending busloads of migrants from the flooded Rio Grande Valley sector in eastern Texas to other Border Patrol facilities in central and western Texas.

Now, the agency is looking all around the country to find more facilities that can help process the migrants. The migrants would be processed, given a date to appear in immigration court and then released into the community.