Iran-US tensions: 'There will be no war', says Zarif 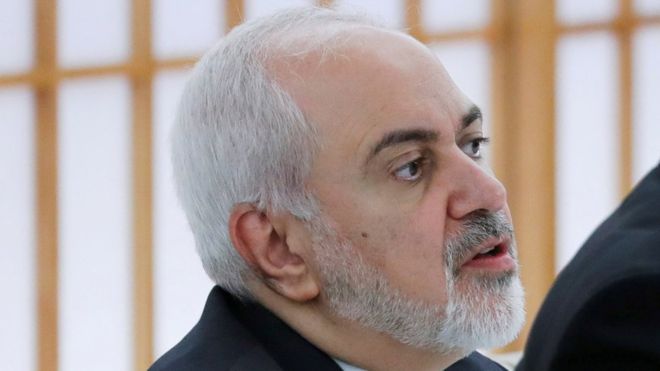 Iran’s foreign minister has said he does not believe a war will break out in the region amid concerns over rising tensions with the US.

Mohammad Javad Zarif told state news agency IRNA that Tehran did not want a war, and that no country had the “idea or illusion that it can confront Iran”.

The US has deployed warships and planes to the Gulf in recent days over what it has described as Iranian “threats”.

But US President Donald Trump has said he wants to avoid conflict.

Speaking to IRNA at the end of a visit to China on Saturday, Mr Zarif said Mr Trump “does not want war, but the people around him are pushing him towards war under the pretext of making America stronger against Iran”.

Why are there tensions?
Tensions have grown between the two countries since last year when President Trump withdrew from the 2015 international deal which had aimed to ease sanctions in exchange for an end to Iran’s nuclear programme.

The US has deployed warships and planes to the Gulf and ordered the departure of “non-emergency employees” from Iraq, citing intelligence about a potential threat to US forces by Iran.

US investigators have also accused Iran or the groups it supports of using explosives to damage four tankers off the United Arab Emirates earlier this month. Tehran has denied the allegations.

While leaders on both sides have insisted they do not want war, tensions in the Gulf remain heightened.

US diplomats warned on Saturday that commercial airlines flying in the area risk being “misidentified”.

An order, issued by the Federal Aviation Administration and relayed by diplomats in Kuwait and the UAE, said aircraft operators needed to be aware of “heightened military activities and increased political tension”.

Insurance market Lloyd’s of London on Friday also widened its list of areas in and around the Gulf that pose an “enhanced risk for marine insurers”.