Philippines recalls ambassador to Canada in row over rubbish 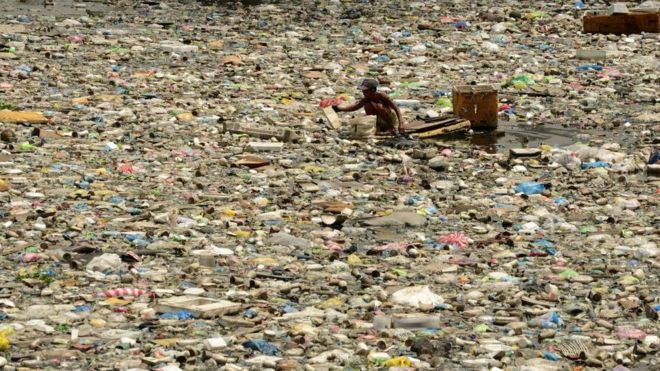 Illegal rubbish dumping has become a big problem in the Philippines

The Philippines has recalled its ambassador to Canada in an escalating row over the disposal of waste wrongly labelled as recyclable.

The Philippines’ foreign secretary said Canada missed a May 15 deadline to retrieve rubbish shipped out in 2014.

Last month, Philippine President Rodrigo Duterte said he would “sail to Canada and dump their garbage there”.

Reports say the waste amounts to many dozens of containers filled with common household rubbish like soiled nappies.

“At midnight last night, letters for the recall of our ambassador and consults to Canada went out,” Philippine Secretary of Foreign Affairs Teddy Locsin Jr said in a tweet.

“Canada missed the… deadline. And we shall maintain a diminished diplomatic presence in Canada until its garbage is ship bound there.”

Mr Locsin said what triggered him to pull out the envoys was Canada’s failure to show up at a meeting with Philippine customs officials.

That the government may consider a 2 to 3 week delay DOES NOT EXTEND THE DEADLINE. Our diplomatic presence in Canada shall be de minimis. At the Japanese enthronement ceremony, DOF informed me that Canada did not show up at a meeting with Customs and that was the trigger.

He also sent a tweet to the Philippines’ Department of Foreign Affairs saying: “To our posts in Canada: You have your orders. Get the next flight out.”

The Canadian Embassy in Manila told the BBC that they have “made an offer to repatriate the Canadian waste” and are closely engaged with the Philippines “to ensure the shipment’s return, as quickly as possible”.

How did the row escalate?
Officials in the Philippines first raised the waste issue with Canada in 2014 after it found that containers of rubbish had been shipped between 2013 and 2014.

Manila says the containers, which arrived at Manila International Container Port, were falsely labelled as containing plastics meant for recycling and were in fact filled with tonnes of household waste. 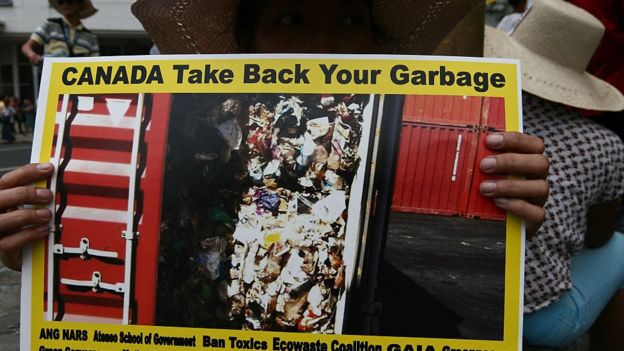 Protesters have called for Canada to take their rubbish back

Another inspection of the remaining containers in 2015 found they contained non-hazardous municipal waste, including household and street rubbish.

Some remain in storage at the Manila port while others have been disposed of in a large landfill site.

In 2016, a court in the Philippines ordered the waste to be shipped back to Canada at the expense of the importer.

That same year, Canada amended its own regulations around hazardous waste shipments to prevent a repeat of this.

Reality Check: Where is the plastic waste mountain?

The small town with a dirty secret

Earlier last month, Mr Duterte strongly criticised Canada, saying it had turned his country into a “dump site”. The challenge of global waste – and where it ends up – has been of growing concern, but it was after a ban on “foreign waste” by China in 2017 that the extent of the problem surfaced. In that year alone China had taken in seven million tonnes of plastic scrap – the idea was that a large proportion could be processed and recycled but in reality some was destined for landfill. Many environmental campaigners considered it a victory when China clamped down. The amount of plastic taken by China dropped by 94% between 2016-17 and 2017-18. However, a large proportion of this waste is now being sent to countries across South East Asia such as Malaysia and the Philippines.