US does not seek war with Iran, says Mike Pompeo 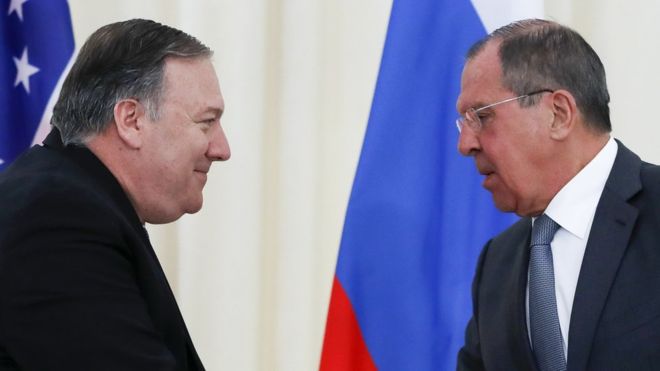 US Secretary of State Mike Pompeo has said the United States does not seek a war with Iran, amid rapidly growing tensions between the two countries.

Speaking in Russia, Mr Pompeo said the US was looking for Iran to behave like a “normal country” but would respond if its interests were attacked.

Meanwhile, Iran’s Supreme Leader Ayatollah Ali Khamenei has also said there will be no war with the US.

Last week, the US deployed warships and warplanes to the Gulf.

Tensions escalated even further after an incident with four tankers off the United Arab Emirates on Sunday, with US investigators believing Iran or groups it supports were involved.

No evidence of Iran’s role has emerged and Tehran, which denies any involvement, has called for an investigation.

What has Pompeo said?
Mr Pompeo, who held talks with Russia’s Foreign Minister Sergei Lavrov in the Russian city of Sochi, said the US “fundamentally” did not seek a conflict with Iran.

“We have also made clear to the Iranians that if American interests are attacked, we will most certainly respond in an appropriate fashion.”

The talks between Mr Pompeo and Mr Lavrov to help improve ties between Washington and Moscow have underlined continuing differences:

Mr Pompeo said he had urged Russia to end its support for President Nicolás Maduro but Mr Lavrov rejected this, saying the US threats against Mr Maduro were undemocratic
He also said he had warned Russia against interference in the 2020 US presidential election while Mr Lavrov said he hoped that tumult over allegations of Russian influence in US elections would die down
On Ukraine, Mr Pompeo said the US would not recognise Russia’s annexation of Crimea in 2014 and that sanctions would remain in place
What has Iran said?
In remarks carried on state media and on his Twitter account, Ayatollah Ali Khamenei repeated Tehran’s position that it would not negotiate with the US on a nuclear deal to replace the one President Donald Trump withdrew from last year.

But Mr Khamenei said: “We don’t seek a war, nor do they.”

On Monday, President Hassan Rouhani told a meeting with clerics that Iran was “too great to be intimidated by anyone”, saying: “God willing we will pass this difficult period with glory and our heads held high, and defeat the enemy.”

Why have tensions with Iran risen?
The incident with the four commercial ships is said to have taken place within UAE territorial waters in the Gulf of Oman, east of the emirate of Fujairah, but few details have been released.

The vessels had been targeted in a “sabotage attack” near Fujairah port, just outside the Strait of Hormuz, the UAE foreign ministry said.

There were no casualties but Saudi Arabia said two of its ships had suffered “significant damage”. Another tanker was Norwegian-registered while the fourth was reportedly UAE-flagged.

US military investigators discovered large holes in all of the ships and believe they were caused by explosive charges, the Associated Press reported quoting an unnamed official. They did not explain how the damage was linked to Iran.

Compared with previous attacks on shipping in the Middle East – the USS Cole in 2000, the Limburg tanker in 2002 and more recent attacks off Yemen – the damage done to four tankers off the UAE coast on Sunday is minimal.

There has been no oil spillage, no flames and no casualties. But the timing is both suspicious and dangerous.

Whoever carried out this attack could hardly have been unaware of the rising tensions in the Gulf, with the US dispatching additional forces to the region. It would appear that the anonymous culprit was deliberately trying to ratchet up that tension, possibly provoking a conflict.

While Saudi Arabia and the UAE have stopped short of blaming their adversary, Iran, US officials have reportedly said that is where their suspicions lie. But Iran has condemned the attack as “dreadful” and a parliamentary spokesman said Iranian suspicions fell on Israel.

What has Trump said?

On Tuesday, President Trump dismissed a New York Times report suggesting the military had plans to send up to 120,000 troops to the Middle East should Iran attack US forces there or accelerate work on nuclear weapons.

“We have not planned for that. Hopefully we’re not going to have to plan for that. And if we did that, we’d send a hell of a lot more troops than that,” Mr Trump said a day after warning Iran that it would “suffer greatly” if it did anything.

The US has previously warned that “Iran or its proxies” could be targeting maritime traffic in the region and, in recent days, deployed warships to counter “clear indications” of threats from the country.

Iran dismissed the allegation as nonsense.

Earlier, Iranian-backed Houthi rebels in Yemen said they had carried out drone attacks on a major Saudi oil pipeline. Saudi Arabia’s energy minister described the incident as an act of terrorism.