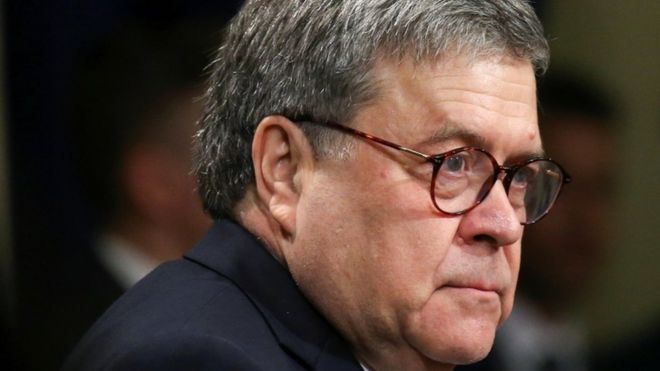 US Attorney General William Barr has assigned a senior federal prosecutor to examine the origins of the Russia investigation.

John Durham, the US attorney in Connecticut, has reportedly been asked to determine whether the collection of intelligence on the Trump campaign was lawful.

President Donald Trump has long called for such an investigation.

He has branded the Russia inquiry a “witch hunt” by his opponents.

Critics of Mr Barr, however, have accused him of acting on behalf of the president rather than in the interests of US justice.

Speaking to reporters outside the White House on Tuesday, Mr Trump said he had not directed Mr Barr to investigate the origins of the Russia probe.

“I didn’t ask him to do that… But I think it’s a great thing that he did,” Mr Trump said. “I am so proud of our attorney general.”

He gave no details but said he was gathering a team to look into the origins of the investigation, which was led by special counsel Robert Mueller.

How would this differ from the Mueller inquiry itself?
Mr Durham, who has a background in investigating wrongdoing and corruption among public officials, will not be acting as a special counsel in the same way Mr Mueller did, reports say.

But he will be tasked with exploring whether the government acted lawfully and appropriately when collecting intelligence ahead of the 2016 election. Mr Trump and his supporters have often accused the FBI and the Department of Justice of illegally monitoring his campaign.

This is the third known inquiry into the early days of the Russia investigation. A Department of Justice inspector general is also examining the origins of the investigation, and the US attorney in Utah has also been asked to look into aspects of it.

Further details of the latest review are limited and the Justice Department has yet to comment.

Mr Durham is also exploring whether former FBI general counsel James Baker disclosed confidential information to the media, the New York Times reports. Mr Baker denies wrongdoing, and it is unclear if this line of inquiry relates directly to the Russia investigation.

What did the Mueller report find?
Mr Mueller’s 448-page report did not conclude that there was a criminal conspiracy between Moscow and the Trump campaign to influence the 2016 US presidential election.

However, it did detail 10 instances where Mr Trump possibly attempted to impede the investigation.

The report concluded that Russia had interfered in the election “in sweeping and systematic fashion”.

That interference took the form of an extensive social media campaign and hacking into Democratic Party servers by Russian military intelligence, the report said.

Mr Trump and his supporters immediately jumped on the fact that no collusion was found. “After three years of lies and smears and slander, the Russia hoax is finally dead,” the president said at the time. He called for an investigation into the report.

How have Trump’s lawyers reacted?
On Tuesday, the president’s lawyers welcomed news of Mr Barr’s review. “He made a sensible choice,” Rudy Giuliani said. “I believe Barr has selected an excellent person.”

“The origins of this investigation have to be examined thoroughly, and the appointment of a US attorney would be the appropriate course of action,” another of Mr Trump’s lawyers, Jay Sekulow, said.

Meanwhile, leading Democrats have demanded that the Mueller report be published in full. They have pledged to make use of the party’s majority control of committees in the House of Representatives to continue investigating the president.

Earlier this month, a US House of Representatives panel voted to hold Mr Barr in contempt of Congress for not releasing an unredacted copy of the report. The judiciary committee took the rare step as tensions rose over its findings.

US Speaker Nancy Pelosi accused Mr Barr of lying to Congress but a justice department spokeswoman called it a “baseless attack”.