Donald Trump effigies are burning on the streets and there are fears of an “all-out war”, as tensions between the US and an old foe are on a knife edge. 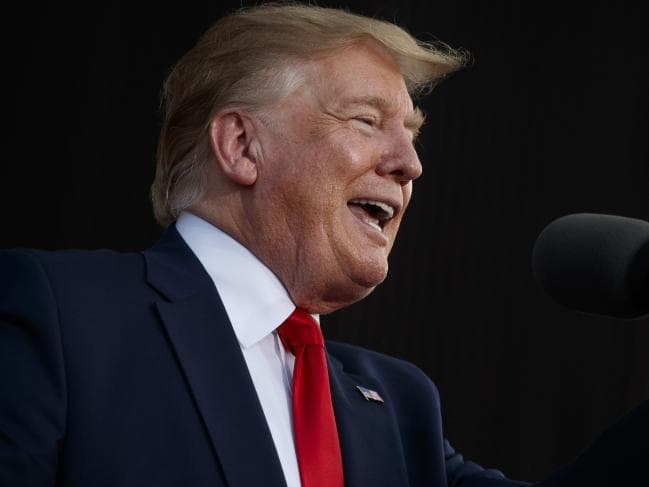 As effigies of Donald Trump and US flags are burned on the streets of Iran, America is bearing down on the Islamic nuclear power in a military move which could spark “all-out war”.

The US has still not fully explained why it has sent an aircraft carrier and B-52 bombers to the Gulf, but it’s clear from the mass protests on the streets on the Iranian capital, Tehran, that tension between the two nations is on a knife edge.

They both believe their troops are going to be attacked at any moment and have pointed their fingers squarely at each other for stoking the flames of division, according to diplomats, analysts and politicians in the region. 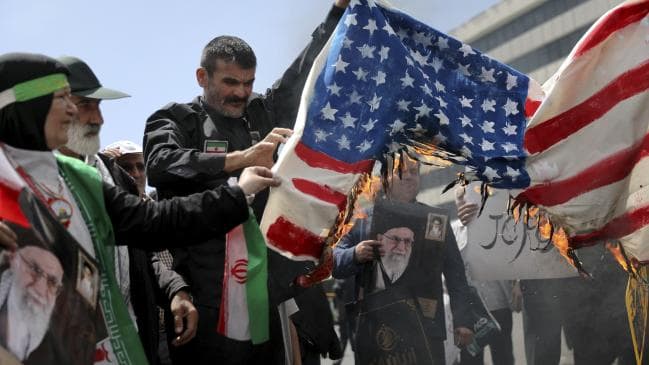 Both the US and Iran are ratcheting up their rhetoric. Picture: Ebrahim Noroozi/APSource:AP

And, although there hasn’t been a major naval confrontation between the pair since 1988, it is feared that any conflict that may arise in the coming days and weeks would have far-reaching and unpredictable consequences.

Iran’s President Hassan Rouhani has warned that Iran is facing “an all-out war unprecedented in the history of the Islamic republic” due to the perceived provocations from the US. 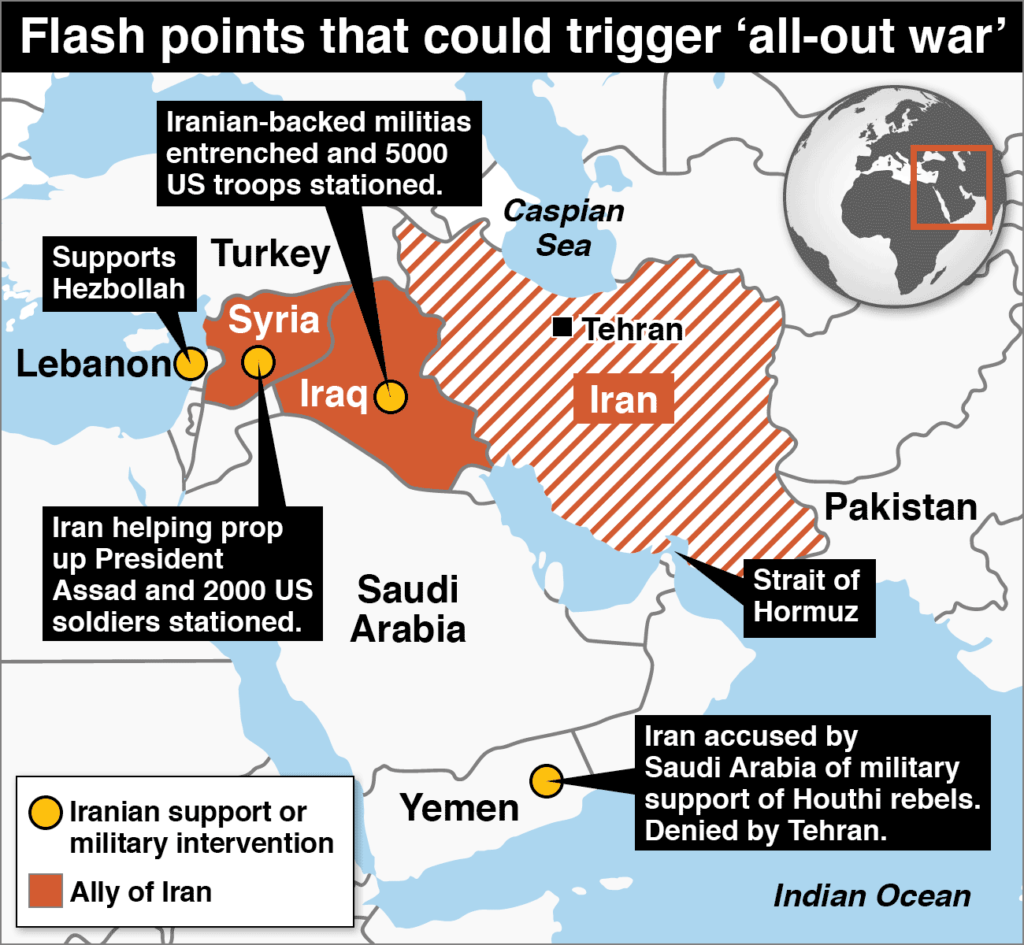 He warned, that if this was to happen, it would trigger a “very, very dangerous” conflict between the United States and Iran that would have “tremendous unforeseen consequences in the Middle East”.

However, it is feared that this conflict — which would potentially put millions of lives at risk due to Iran’s nuclear capabilities — could break out as a result of a mere accident. 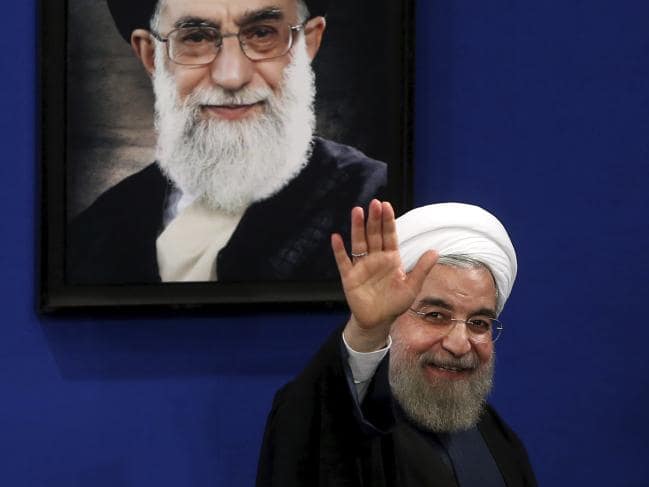 Crisis Group’s Iran Project Director Ali Vaez told The Times, that this is because communication between the US and Iran has broken down almost entirely.

“With no channels of communication between Iran-US, there is plenty of space for miscalculations,” he said. “An inadvertent accident could easily trigger a broader conflict. It’d almost be magical if we can come out of this period unharmed.”

DANGEROUS FLASHPOINTS WHERE IRAN HAS POWER

Despite the US having the long-range capability to strike Iran, experts have warned that fighting is more likely to break out across several flashpoints in the Middle East and the Arabian Peninsula — where Iran has troops that are loyal to its government or directly in its control.

The two most obvious points where fighting between nuclear powers might blow up is in Iraq and Syria.

Despite the Iraq war beginning 16 years ago, the US still has 5000 troops there and many of them are stationed in and around Baghdad, where Iranian backed-militias are stationed in proximity.

In Syria, Iran has invested its military power in propping up divisive leader Mr Bashar al-Assad and, in some parts of the war-torn nation, they are stationed just metres away from US soldiers.

Yemen is another potential flashpoint, as its Saudi-backed government, supported by weapons from the US, and the Iranian-aligned Huthi rebels continue to clash and push millions to the brink of famine.

Lastly, there’s Lebanon where Iranian-backed terror group Hezbollah has, just last week, blasted the United States over new sanctions it imposed on Iran, saying Washington D.C. “behaves in accordance with the law of the jungle”.

In a statement, the group — which wants to see the destruction of key US Middle Eastern ally Israel — said Iran had the power to defend itself against the Trump administration’s “tyrannical and dictatorial trend.”

WHY IS IT COMING TO A HEAD?

It has now been a year since Mr Trump turned his back on Barack Obama’s 2015 nuclear deal — which was designed to stifle Iran’s nuclear ambitions and subject it to the most rigorous international inspection regime ever implemented anywhere.

Last week, Mr Trump tightened the screws even further on Iran with sanctions on its mining industry in addition to sanctions which have targeted nearly all sectors of Iran’s economy.

All this has wreaked havoc with Iran’s economy, meaning the growth that followed the lifting of sanctions in 2016 has dropped off, giving rise to an inflationary recession.

The Iranian currency has lost two-thirds of its value, as oil exports have dropped by more than half and experts say it is likely fall further still.

In retaliation, Iran announced on May 8 — one year after the US withdrew from the nuclear deal — that it would begin enriching uranium at higher levels and suspending some of its commitments under the agreement. 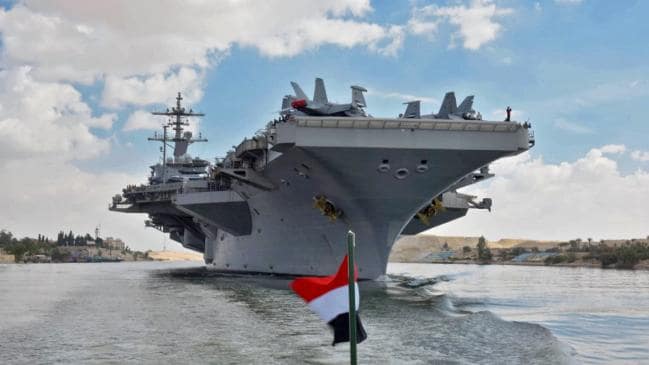 The Suez Canal Authority released this photo in May of the USS Abraham Lincoln sailing south in the Suez Canal near Ismailia city east of Cairo. Picture: AFPSource:AFP

President Hassan Rouhani issued an ultimatum to the Europeans, threatening that Iran would go further if they failed to deliver sanctions relief to counterbalance Mr Trump’s renewed assault on the Iranian economy within 60 days.

However, European powers have since rejected that ultimatum and the US has continued to build pressure on Iran, with Secretary of State Mike Pompeo accusing Tehran of planning “imminent” attacks.

Tensions have already been stirred up since as four commercial ships off the eastern coast of the United Arab Emirates “were subjected to sabotage operations” yesterday just hours after Iranian and Lebanese media outlets aired false reports of explosions at a nearby Emirati port.

Emirati officials declined to elaborate on the nature of the sabotage or say who might have been responsible.

However, the reported incident comes as the US has warned ships that “Iran or its proxies” could be targeting maritime traffic in the region.

And, as Mr Trump bolsters his military prowess in the region, he has made it clear he is not backing down until Iran changes its ways.

“Tehran can expect further actions unless it fundamentally alters its conduct,” he said in a statement on Wednesday. 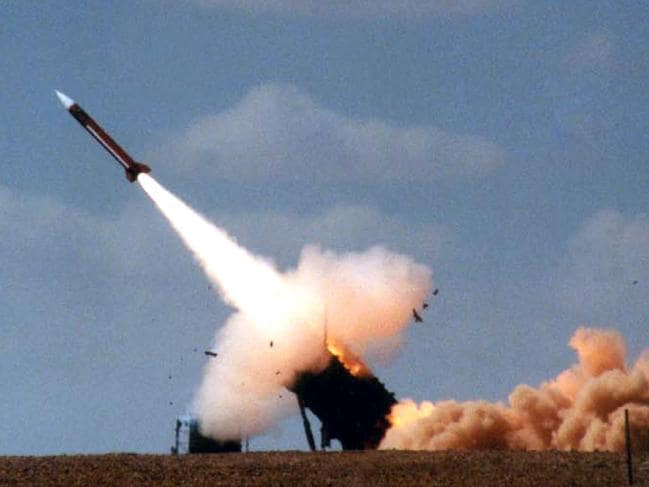 An Israel Patriot antimissile missile. The US is deploying more firepower to the Gulf. Picture: SuppliedSource:AFP