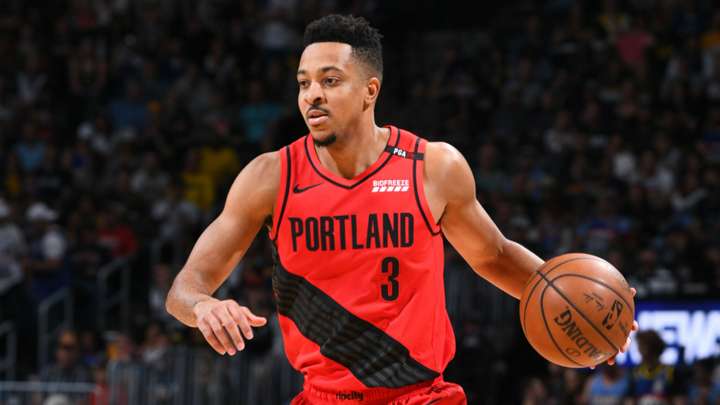 The Portland Trail Blazers get it done on the road! They defeat the Denver Nuggets 100-96 to reach their first Conference Finals since 2000.

CJ McCollum could not be stopped in this one – he went for a game-high 37 points, including some clutch buckets down the stretch to keep his team alive.

Nikola Jokic exploded for 29 points, 13 rebounds and two assists but it wasn’t enough to give his team the win.

If you missed any action from Game 7, we had you covered with updates, highlights and more.

Final: Portland Trail Blazers 100, Denver Nuggets 96
After Nikola Jokic went 1-for-2 from the free throw line, Evan Turner goes 2-for-2 from the line to give Portland a 100-96 lead with eight seconds on the clock.

CJ McCollum is a bad man. He matches Jamal Murray’s step-back with one of his own to put the Blazers up 98-95 with 11 seconds to go!

Jamal Murray with a huge step-back jumper to make it a one-point game with just 30 seconds remaining! The Blazers lead 96-95.

Damian Lillard comes up with a huge steal in the backcourt and caps it off with a clutch 3-pointer to extend the Blazers lead. Jamal Murray attacked and got fouled, sinking both free throws to make it 92-87 Portland with 3:09 left in the game.

With every possession magnified, CJ McCollum comes up with a huge chase down block on Jamal Murray to preserve an 87-83 lead with 4:26 to go. Out of the stoppage in play, Evan Turner will go to the free throw line with a chance to extend Portland’s lead.

A Damian Lillard 3-pointer gives the Trail Blazers their biggest lead of the game at 81-76 with 8:51 remaining. It was his first 3-ball of the game and he’s 2-for-13 from the field, but he’s making an impact in other areas with nine rebounds and eight assists.

End of third quarter: Nuggets 72, Blazers 71
After scoring 15 points in the first half, CJ McCollum scored 14 points in the third quarter alone to will the Blazers back into this one. The Nuggets remain in the lead by one point, but the Blazers had taken their first lead of the game just before the end of the quarter. Portland (1-for-19) and Denver (2-for-13) are a combined 3-for-32 from beyond the arc in this game.

CJ McCollum’s 14 3rd quarter PTS (29 total) have the @trailblazers back within one! #RipCity #NBAPlayoffs

The Trail Blazers cut the Nuggets’ 17-point lead to one possession, but an and-1 finish from Torrey Craig regains some momentum for Denver. Rodney Hood went down with an injury on the play, holding his knee. Also worth noting, Zach Collins picked up his fifth foul on Craig’s bucket.

CJ McCollum is holding it down for the Trail Blazers. He already has six points in the third quarter and has cut the Nuggets lead to 56-49 with 7:52 left in the frame.

Halftime: Nuggets 48, Blazers 39
The Nuggets led by as much as 17 points before the Blazers made their run.

Nikola Jokic has his team in command with 13 points and five rebounds. Per usual, it’s a balanced scoring attack for the Nuggets with Jamal Murray’s nine points, eight points from Paul Millsap and seven points from Gary Harris.

Portland missed their first 10 3-point attempts of the game and are still shooting 1-for-14 at the half. Damian Lillard didn’t score his first bucket until the six minute mark in the second quarter but has gotten himself going by getting to the free throw line. CJ McCollum is leading the team with 15 points, keeping the Blazers within striking distance.

End of first quarter: Nuggets 29, Blazers 17
Jamal Murray is attacking early in this one, going on a personal 7-0 run to set the tone for Denver.

Nikola Jokic is already up to eight points and Gary Harris has chipped in seven. CJ McCollum has done the majority of the scoring for Portland with eight points. Damian Lillard hasn’t seen one go through the hoop yet, shooting 0-for-5 from the field, missing all three of his 3-point attempts.