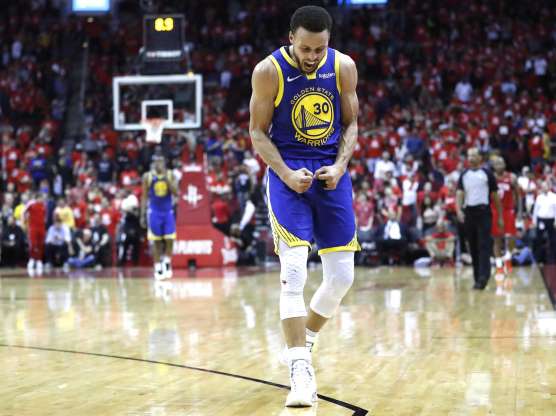 GOLDEN STATE WARRIORS GUARD STEPHEN CURRY (30) CELEBRATES NEAR THE END OF THE SECOND HALF OF GAME 6 OF THE NBA WESTERN CONFERENCE SEMIFINALS AGAINST THE HOUSTON ROCKETS AT TOYOTA CENTER ON FRIDAY, MAY 10, 2019, IN HOUSTON. THE WARRIORS ELIMINATED THE ROCKETS WITH A 118-113 WIN, TO TAKE THE SERIES 4-2.

HOUSTON — The Warriors had reason to feel optimistic when Stephen Curry checked in with less than 10 minutes left Friday night: Limited by foul trouble, he was 3-for-12 from the field — yet, somehow, Golden State was within four points.

Almost on cue, Curry rediscovered his shot, helping lift the Warriors to a 118-113 win over the Rockets in Game 6 of the Western Conference semifinals at Toyota Center. After nearly a year seeking revenge for its Game 7 defeat to Golden State in the 2018 West finals, Houston was unable to seize a seemingly tailor-made opportunity.

Warriors forward Kevin Durant, who sustained a calf injury in Game 5, was watching from his Bay Area home. For much of the night, Curry — mired in a series-long shooting slump — continued to miss attempt after attempt. But when it mattered most, he found his signature groove, scoring 23 points on 6-for-8 shooting (3-for-5 from 3-point range) over the final 9:57 to end the Rockets’ season.

Golden State will face the winner of Portland-Denver, which has Game 7 of its conference semifinal Sunday, in Game 1 of the conference finals on Tuesday. In the meantime, the Warriors will hope Durant gets healthy enough to return. And if he doesn’t? Golden State will trust that a depleted roster that still boasts several future Hall of Famers will be good enough, just as it was Friday.

When Curry checked in early in the fourth quarter, the Warriors trailed the Rockets 89-85. Curry scored 23 of Golden State’s 33 points to close the game, offering yet another reminder that shooters of his historic caliber have but one way to snap out of a rut: keep shooting.

Within seconds of stepping back on the court, he drove through the key and hit a layup. Little more than a minute later, Curry drilled a 3-pointer. The floodgates had opened. The Rockets sent double-team after double-team toward Curry, only for him to unleash a mix of dazzling dribbling displays, scoop shots and deep 3-pointers.

After drilling a 28-footer with 3:09 left, Curry turned around, munched his mouthguard and raised both hands wide as if to ask, “What was that?” This was the type of clutch performance that could be played at his Hall of Fame ceremony someday.

After five games marred by foul trouble and shooting duds, Curry poured in a playoff career-high 23 points in the fourth quarter. But for him to even have a chance to propel the Warriors to victory, Klay Thompson needed a memorable start, scoring 21 of his 27 points in the first half.

Curry, who was whistled for his third foul midway through the second quarter, was forced to spend 12 minutes of the first half on the bench. With Draymond Green also in foul trouble, Warriors head coach Steve Kerr tested a thin bench. Golden State’s reserves outscored Houston’s 33-15.