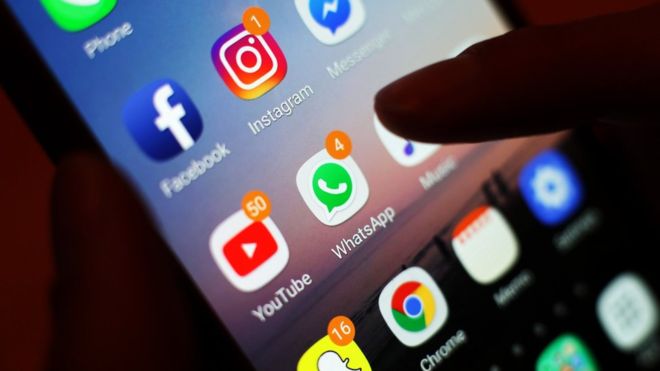 A boycott of social media sites could force firms to take action to safeguard children, a senior police officer says.

Chief Constable Simon Bailey said the companies were able to “eradicate” indecent imagery on their platforms.

But, he added, tech giants had abdicated their duty to protect children and fines were “little more than a drop in the ocean” to them.

The number of images on the child abuse image database has ballooned from less than 10,000 in the 1990s to 13.4 million currently.

Starting on Monday, the Independent Inquiry into Child Sexual Abuse will hold two weeks of hearings focusing on internet companies’ responses to the problem, during which Mr Bailey – and executives from Facebook, Google, Apple, BT and Microsoft – will give evidence.

Instagram ‘biggest for child grooming online’
Facebook and Twitter grilled over MP abuse
Viral app Yolo raises abuse concerns
Social media effect ‘tiny’ in teenagers
Mr Bailey, who is the chief constable of Norfolk and leads on child protection for the National Police Chiefs’ Council, believes the government’s online harms white paper could be a “game changer” – but only if it leads to effective punitive measures.

“Ultimately the financial penalties for some of the giants of this world are going to be an absolute drop in the ocean,” he said.

“But if the brand starts to become tainted, and consumers start to see how certain platforms are permitting abuse, are permitting the exploitation of young people, then maybe the damage to that brand will be so significant that they will feel compelled to do something in response.”

He added: “We have got to look at how we drive a conversation within our society that says ‘do you know what, we are not going to use that any more, that system or that brand or that site’ because of what they are permitting to be hosted or what they are allowing to take place.”

‘Common approach’
Meanwhile, Facebook founder Mark Zuckerberg has called for the industry to “come together” to find a solution to the problem.

“There are still many open questions here and we’ll consult with safety experts, law enforcement and governments on the best ways to implement safety measures,” he wrote in a blog post.

“We’ll also need to work together with other platforms to make sure that as an industry we get this right. The more we can create a common approach, the better.