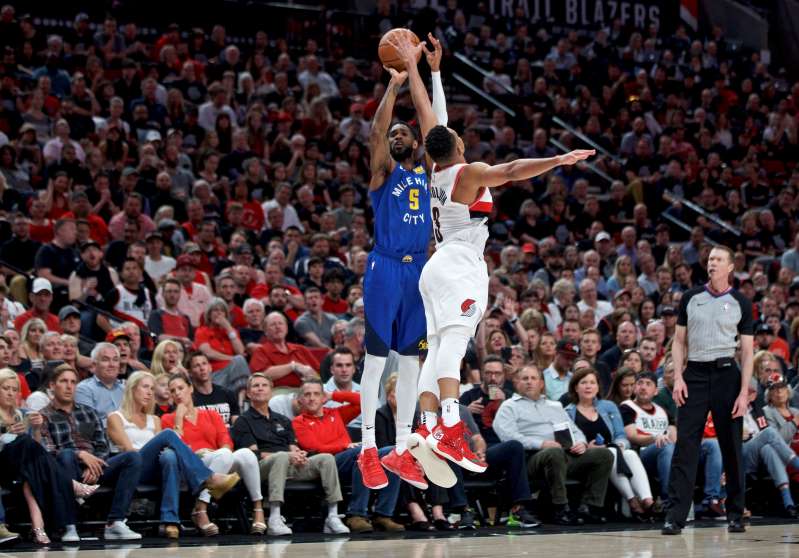 For those partial for the NBA the end of this week is like an early version of Christmas, with as many as three series deciders providing a mouthwatering platter of basketball tension and a perfect excuse to fossilize yourself to the couch.

Yet while the focus will gear heavily towards the do-or-die finale of the Golden State/Houston series (assuming it goes that far) and Toronto’s enthralling scrap with Philadelphia, the least-noticed of all the second round tussles deserves to share the top of the bill.

The Denver Nuggets and Portland Trailblazers have warranted your focus from the very first tipoff of their head-to-head, but found themselves overshadowed somewhat by bigger names and higher-profile games elsewhere.

Their series has been a modern classic from the outset, a thrilling, explosive and profoundly competitive bout between two teams that have so much to like about them.

The NBA is superstar-heavy and trend-oriented, and that reality applies to both teams and players. The Nuggets/Trailblazers showdown was never going to steal the spotlight from the Warriors waging battle against its now-familiar rival, the Rockets, and that’s just the nature of things.

Denver have been beneath the radar all season long, but put together an excellent campaign under the coaching leadership of Michael Malone and the silky passing hands of Serbian center Nikola Jokic. Watch Jokic for five minutes and you might see a big man who occasionally lumbers. Watch him for a whole game and you can’t miss the fact he is a man mountain with beautiful skills and court vision akin to the craftiest of point guards.

Portland are never the most noticed of teams, even with Damian Lillard and CJ McCollum as bona fide superstars. Their series with Denver has seen most of the games finish up at a time when most of the east coast is already tucked up in bed.

That was certainly the case in the four-overtime epic that was Game Three. The crazy thing is, that might not even have been the best game of the series.

The other Western Conference semifinal has dominated chatter because it is a superstar-laden rematch complete with bountiful subplots, from refereeing controversies to Kevin Durant’s momentum-shifting injury. The perception that the winner of Denver and Portland will be blown away by either Golden State or Houston in the next round hasn’t helped either.

But if you’ve let the Nuggers/Blazers clash pass you by, you’ve missed out. And if you claim to love great basketball yet miss Game Seven, there had better be a darn good reason for it.

Denver and Portland have gone at it in a way that has something for everyone. The raw desire on display is palpable. The Nuggets hadn’t made the playoffs since 2013; Portland had lost 10 straight playoff games coming into this postseason.

The driving forces of each squad are markedly different. Lillard is small and lithe, cutting and darting and shifting direction. Jokic lets the ball do the brisk movement and is not afraid to put his body on the line. They are both top 10 NBA players, but get less acclaim than many players outside that elite group.

Going into Game Seven, Denver have the home court edge, but Portland already took Game Two on the road and may like their chances of doing so again. Lillard has never before seen a Game Seven, but he’s ready.

“It is basically a game where only one team is going to make it out,” Lillard said. “It is your last opportunity to play. Facing elimination is what it is to me. It is for our season, for all the marbles.

Jokic has believed in his Denver group from the outset and loved what he saw at the start of the season, telling USA TODAY back in October that he thought they could contend for a title. It seemed a little laughable then. Now they are one game away from the Western Conference Finals, the joke is on those who doubted.

“Most important is who brings energy on the floor,” Jokic said. “Who brings the physicality. Both teams want to win. Basketball is an emotional game so of course you’re going to talk trash or hit someone, you just want to win the game.”

Those who love this league are most comfortable with familiarity – typical stories and recognizable stars. In league history there have been 23 repeat champions. Denver and Portland don’t fit a neat narrative. They are the teams that are more than the sum of their parts, organizations that have found ways to win when they are not supposed to. They do things we don’t see, valuing traits like togetherness and raw effort.

Jokic, who grew up in a small town in Northern Serbia, spent part of last summer travelling with teammate Gary Harris, who hails from Fishers, Ind. The Blazers’ chief motivation, arguably, has come from Jusuf Nurkic, who provides an emotional lift as he sits on the bench in his suit, having suffered a heartbreaking and horrific late season injury.

Neither of these squads look like most of the others remaining in the postseason but they have shown that they most certainly belong in the latter stages, weeks after most of the teams in the league put their feet up and began perusing vacation brochures. Game Seven is a fitting conclusion, and the only pity is that one of these plucky squads will soon be exiting the race for the championship.