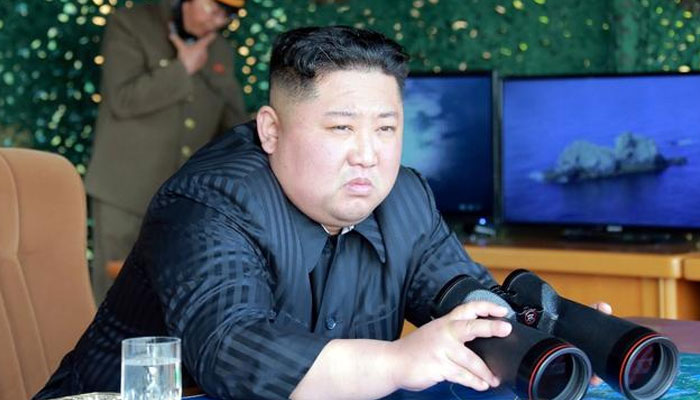 North Korea’s leader Kim Jong Un supervises a “strike drill” for multiple launchers and tactical guided weapon into the East Sea during a military drill in North Korea, in this May 4, 2019 photo supplied by the Korean Central News Agency (KCNA). KCNA via REUTERS

SEOUL: North Korea fired what appeared to be two short-range missiles on Thursday (May 9) in its second such test in less than a week, and the United States said it had seized a North Korean cargo ship as tensions again mounted between the two countries.

US President Donald Trump said “nobody is happy” at the launches, but still appeared to hold the door open for more talks with North Korea.

South Korea said the tests were worrisome and unhelpful and likely a protest against Trump refusing to ease economic sanctions on North Korea at a failed summit in Hanoi in February.

The United States has given no sign of willingness to budge on sanctions and on Thursday the US Justice Department announced the seizure of a North Korean cargo vessel it said was involved in the illicit shipping of coal.

North Korea has effectively pulled back from engagement with Washington since the Hanoi meeting between its leader Kim Jong Un and Trump collapsed without agreement on US demands for the dismantling of Pyongyang’s nuclear program and Kim’s demands for relief from punishing sanctions.

“The relationship continues … I know they want to negotiate, they’re talking about negotiating. But I don’t think they’re ready to negotiate,” Trump told reporters.

Acting US Defence Secretary Patrick Shanahan said the United States would continue to focus on diplomatic efforts with North Korea.

“We’re going to stick to our diplomacy and as you all know we haven’t changed our operations or our posture and we’ll continue to generate the readiness we need in case diplomacy fails,” he told reporters outside the Pentagon.

Trump has held up a freeze in missile testing since 2017 as a sign of progress in his talks with North Korea after exchanges of fiery rhetoric two years ago raised fears of war.

North Korea formally announced a freeze in intercontinental ballistic missile (ICBM) and nuclear bomb tests in April last year and Trump stressed that the missiles fired were not of a kind that could threaten the United States.

“We’re looking at it very seriously right now. They were smaller missiles, they were short-range missiles,” he said. “Nobody’s happy about it but we’re taking a good look and we’ll see.”

North Korea’s official KCNA news agency said Kim oversaw the army “strike drill”, and said he noted that “genuine peace and security of the country are guaranteed only by the strong physical force capable of defending its sovereignty”.

“These missiles, whatever they were, whatever you want to call them, they were very small. And not aimed at Japan, not aimed at Guam, they were aimed up the North Korean coast. So it was a very non-provocative provocation, if there is such a thing.”

He said the relationship between Kim Jong Un and Trump remained good and he was confident there would be more talks with North Korea. “We want additional talks,” he said.

Asked if the US side wanted another summit, he said: “Eventually? Yeah, I think we do,” while adding that at the last summit the North Koreans “were not really willing to negotiate”.

“They gave us an offer – you know, a take it or leave it offer – five different times. And we couldn’t take it, so we had to leave.”

Less than a week ago, Kim oversaw the test-firing of multiple rockets and a missile. That was North Korea’s first test of a ballistic missile since an ICBM launch in November 2017 that it said was capable of delivering a warhead anywhere in the United States.

The two missiles fired on Thursday flew east from the northwestern area of Kusong, South Korea’s Joint Chiefs of Staff said. They covered distances of 420 km and 270 km and reached an altitude of about 50 km before falling into the sea, they said.

South Korea’s President Moon Jae-in, who has strongly advocated engagement with North Korea, said that even if the missiles were short range, they could still violate UN resolutions barring North Korea from developing ballistic missiles.

“North Korea seemed to be discontented it could not reach a deal in Hanoi,” he told South Korean broadcaster KBS, while adding that he saw the tests as a sign that North Korea wanted to negotiate and that he planned to push for a fourth inter-Korean summit with Kim.

US Secretary of State Mike Pompeo was due to meet on Thursday with Japan’s Chief Cabinet Secretary Yoshihide Suga, who is expected to raise Japanese Prime Minister Shinzo Abe’s hopes for a summit with Kim.

Trump and Pompeo have brushed aside Kim’s demand for Washington to show more flexibility in talks by the end of the year.

Analysts said it was too soon to say exactly what kind of missiles were involved in the latest launches, but the range would probably exceed that of most of the rockets North Korea fired on Saturday from its east coast into the ocean.

“North Korea has returned to its classic escalation tactics from before,” said Yang Uk, a senior research fellow at the Korea Defence and Security Forum. “I believe they will keep escalating by using what appear to be short-range missiles, something that will not cause the US to react right away.”

Harry Kazianis, of Washington’s Center for the National Interest think tank, said the launches could only worsen tensions.

“While this recent launch of short-range missiles does not violate Pyongyang’s promise to halt longer-range tests, North Korea has now made it clear it will not halt developing other parts of its military capabilities that threaten the region,” he said.

“Kim’s goal, beyond ensuring his weapons programs are becoming more powerful, is quite clear: to show America and its allies that if they aren’t willing to compromise on the terms of denuclearization, that Pyongyang will indeed go its own way, with missile launches once again becoming the new norm.”

The latest tests coincided with a visit to the South Korean capital by US special envoy for North Korea Stephen Biegun.

North Korea lashed out at the United States and South Korea this week, saying last weekend’s launches were “regular and self-defensive”. It criticised Seoul and Washington for carrying out military drills.

North Korea has repeatedly denounced US-led sanctions aimed at pressing it to give up its nuclear weapons and the mood will not have been lightened by the ship seizure announced on Thursday, the first by the United States of a North Korean cargo vessel for violating sanctions.

The Justice Department said the 17,061-tonne “Wise Honest”, one of North Korea’s largest cargo ships, was first detained by Indonesia in April 2018. It said it was now in the possession of the United States and was currently approaching US territorial waters around American Samoa.

At the UN Human Rights Council in Geneva on Thursday, the United States called on North Korea to dismantle camps it said held tens of thousands of political prisoners.

North Korea denied the existence of political prisoners and said US sanctions were hampering North Koreans’ enjoyment of life.

“Such anachronistic acts are very dangerous,” its ambassador to the council, Han Tae Song, said.