How the Sixers forced a Game 7 with enormous stakes

PHILADELPHIA — From the moment Kawhi Leonard touched the ball Thursday night in the Toronto Raptors’ 112-101 loss at the hands of the Philadelphia 76ers, he encountered multiple bodies.

This seems like an obvious response to an attacking wing who has assembled one of the most prolific individual runs in NBA postseason history, but for the past two weeks in a series that is now knotted at 3-3, the Sixers have been selective in sending traps and quick help at Leonard. Philadelphia’s decision not to throw the kitchen sink at Leonard as a matter of course has been a surprise to Raptors’ players and staff, who had gleefully ridden Leonard in this series.

The Raptors also were well aware that, facing elimination, the Sixers would almost certainly intensify their attention on Leonard in the half court in Game 6. That could disrupt the Raptors’ offensive rhythm, but there would be a steady diet of open looks for everyone else. The Raptors’ willingness to take those shots and drain them would largely determine whether the Raptors would be traveling on Sunday to Milwaukee for the Eastern Conference finals or to downtown Toronto for a decisive seventh game against Philadelphia.

As the Sixers ramped up their double-teams in the post, those shots were readily available for the Raptors — and they missed them at an exceptional rate on Thursday. Overall, Toronto missed 13 of its 20 uncontested field goal attempts in the first three quarters of Game 6, including two of its nine uncontested 3-pointers. For contrast, the Raptors ranked seventh in the league this season on uncontested 3-pointers at 41.4 percent, per Second Spectrum.

“We had a lot of open looks early and we missed them,” Raptors guard Kyle Lowry said. “We didn’t play well tonight.”

Actions trigger outcomes, and just as the attention on Leonard created shot opportunities for Toronto, the corresponding misses by the Raptors ignited the Sixers’ transition attack, which has been their single biggest offensive imperative.

“It was just making a point of actually doing it and not [just] talking about it,” said Sixers point guard Ben Simmons. “Obviously, I’m pretty quick, so I’m able to push the ball. I think it was just being aggressive downhill and just playing my game.”

For all the flak Jared Dudley took about his evaluation of Simmons as a lethal transition threat but an “average” half-court player, the diagnosis is fairly on point — and nobody is more aware of it than the Simmons and the Sixers. Absent an outside shot, Simmons thrives best in a brisk tempo, and the barrage of Raptors’ clankers was the accelerant he desperately needed after struggling in the series. He broke out with 21 points on 9-for-13 shooting from the field, eight rebounds, and six assists without a turnover. 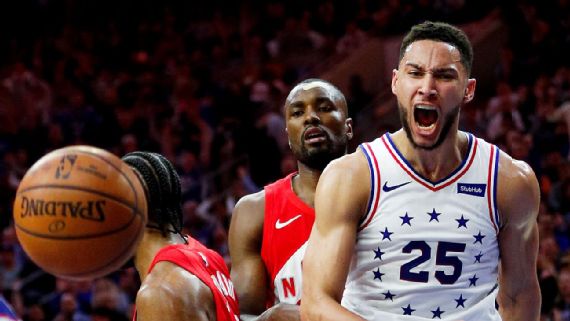 “Obviously, I’m pretty quick, so I’m able to push the ball,” Ben Simmons said. “I think it was just being aggressive downhill and just playing my game.” AP Photo/Chris Szagola

The Raptors, meanwhile, have relied on their solid transition defense all season long and throughout the playoffs, but stumbled a step slow into too many early offense situations on the Sixers’ end of the court. Even when the Raptors caught up to the action, they were exposed on the glass, where they were again bothered by the Sixers’ size. Toronto allowed Philadelphia to collect 39 percent of their missed shots for additional possessions, and the Raptors continue to have the worst rebounding rate of the remaining teams by a considerable margin.

“We’ve got to rebound the basketball better and just kind of limit the transition,” Raptors forward Pascal Siakam said. “We’ve got to limit them to one shot and make them play in the halfcourt.”

Siakam’s comment underscored a reality revealed in Game 6 that will inform Sunday’s Game 7: Structure favors Toronto in this matchup. That’s not to say the Raptors necessary want a half-court game — they’re incredibly effective on the break, leading the league in points per transition possession in the regular season.

But the Raptors are a team that relies on collective intelligence to execute heady actions. Even when Leonard is working up top in a pick-and-roll or in isolation, he’s a surveyor who is timing gaps and watching the help defenders, while his teammates move with purpose to be in the best position to maximize a potential pass.

Jimmy Butler (an efficient 25 points, eight assists and six rebounds in Game 6) and Joel Embiid (17 points, 12 rebounds and a gaudy plus-40) provide Philadelphia release valves on the wing and in the post respectively. But despite their individual skill sets, the Sixers’ offense gums up against the Raptors’ sturdy base defense. Even on Thursday night, the Sixers managed a meager 87.3 points per 100 possessions in the half court, according to Cleaning the Glass. It’s possible they can pick-and-roll their way to the conference Finals through Butler, with Embiid hitting multiple 3-pointers, but it’s likely not the path of least resistance.

Whether Game 7 is an open-court affair, a shooting exhibition courtesy of double-teams and scrambling defense, or a sequence of fits and starts, it represents one of the most high-stake games we’ve seen in recent years.

At the NBA’s Final Table, which is now down to seven participants, Toronto and Philadelphia are the two swashbucklers, the teams that assumed the biggest gambles to assemble their stack of chips. Both made their blockbuster trades over the past year with the expectation they would play past the conference semifinals. On Sunday, they will go head-to-head in Toronto, both all-in.