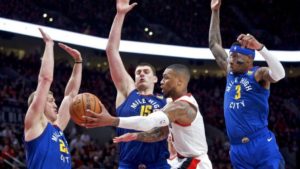 The Portland Trail Blazers and Denver Nuggets meet on Thursday in game 6 of the NBA playoffs semi-finals at the Moda Center.

The Blazers missed their first five shots and fell behind 9-2, setting the tone for a tough night. Lillard had a shot at a four-point play in the first half but missed the free throw, continuing his struggles from the stripe. Damian Lillard led Portland with 22 points but again struggled from the arc, going 2 of 9 on 3-pointers. The second team option CJ McCollum Averaging 24 points and 5.4 rebounds per game while Center Enes Kanter is 13.7 points 10 rebounds, AL-Faroucq Aminu 9.4 points and rodney Hood 8.8 points per game.

The Blazers need to win and use their homecourt  advantage to force a game 7 against Denver Nuggets.

In a crucial Game 5, the Denver Nuggets were firing on all cylinders in a convincing victory over the Portland Trail Blazers. Denver rode strong defense, an impressive rebounding advantage and a balanced scoring attack to dismantle the Trail Blazers. Four players scored more than 15 points for Denver, headlined by a 25-point, 19-rebound performance from Nikola Jokić.

The Denver Nuggets is rank number 6th in points averaging 110.3 points in their 45.3 field goal percentage, 5th in assist averaging 24.9 and 47.8 in rebounding while 35.5 percent from beyond the arc and 77.3 from the foul line.

The Nuggets can secure their first trip to the Western Conference final in a decade with a win in Game 6 on Thursday night in Portland.

Nuggets are 0-6 ATS in their last 6 Thursday games