The Golden State Warriors Visit the Houston Rockets in the Western Conference Semi-Finals round 2 game 4 on Monday Night at Toyota Center Houston, Texas. 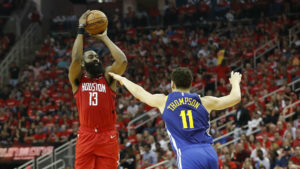 The Golden State Warrior struggled to find offense at inopportune times and wound up with a 126-121 overtime loss to the Rockets on Saturday. With the defeat, the Warriors series advantage falls to 2-1 with Game 4 coming up on Monday evening in Houston.

Kevin Durant scored a game-high 46 points including a career-high 34 points in the second half He’s scored 35-or-more points in each of the last four games. Draymond Green recorded his 2nd triple-double of the 2019 playoffs and sixth of his career with 19 points, 11 rebounds and 10 assists, Steph Curry scored 17 points and 4 assist and Andre Iguodala finishes with 16 points on 6-for-9 shooting,

Meanwhile The Rockets got 71 of their 126 points from James Harden 41 points 7.1 assist and Eric Gordon 30 points, including a combined 12 three-point shots made between the two, in the team’s Game 3 win in Houston. Chris Paul also continued his strong play against the Warriors with 14 points and tied his 2019 NBA Playoffs high of seven assists, while Clint Capela had his second double-double 13 points 11 rebounds. Houston received additional help from Iman Shumpert who, though had averaged under one point in four minutes of play so far this postseason, made his first three three-point attempts en route to 10 points on the night. In all, the Rockets finished shooting 48.4 percent from the field and 42.9 percent from beyond the arc, both above their playoff averages of 43.7 and 36.2, respectively, heading into the game.