Venezuelan opposition supporters have been holding mass protests, a day after violent clashes with government forces.

“We will keep going with more strength than ever,” opposition leader Juan Guaidó tweeted. Pro-government rallies are also taking place.

The rival demonstrations come after President Nicolás Maduro said he had stopped an “attempted coup” on Tuesday.

Mr Guaidó says he is backed by members of the armed forces, but Mr Maduro insists he still has their support.

In a fiery television address on Tuesday, Mr Maduro accused protesters of “serious crimes” which he said would “not go unpunished”, and said the US was plotting against him.

Venezuela crisis in 300 words
Who is Juan Guaidó?
Profile: Nicolás Maduro
Mr Guaidó declared himself Venezuela’s interim leader in January and has been recognised by more than 50 countries, including the US, the UK and most in Latin America.

But Mr Maduro – backed by Russia, China and the top of the country’s military – has refused to cede leadership to his rival.

US Secretary of State Mike Pompeo said military action was “possible” if necessary but that the US would prefer a peaceful transition of power. Russia’s Foreign Minister Sergei Lavrov warned the US against further “aggressive” steps.

The UN meanwhile called on both sides to exercise “maximum restraint”. 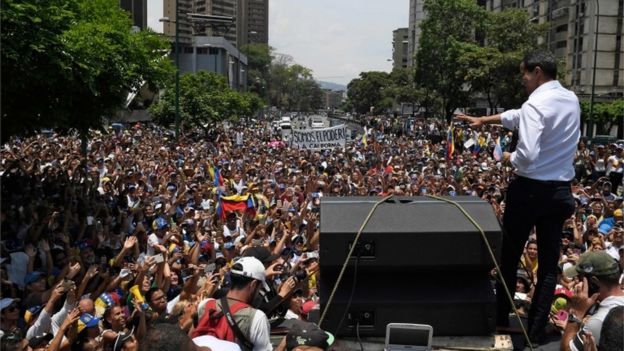 Mr Guaidó addressed his supporters in Caracas on Wednesday

Addressing his supporters in Caracas, Mr Guaidó called the protests an “irreversible process” and vowed to continue demonstrations every day “to achieve freedom”.

“We are on the right track, there is no turning back,” he said.

He also said there would be a series of staggered strikes starting on Thursday and culminating in a general strike.

Local media report gunfire in Altamira, a neighbourhood in east Caracas where the opposition regularly gathers.

There were also clashes on a highway close to an airbase in the east of the capital, with protesters driving a van through the perimeter fence.

National Guard on motorbikes fired tear gas at the demonstrators.

Some demonstrators threw stones, while others have been seen making Molotov cocktails.

Demonstrations have taken place in all 23 states of Venezuela as well as in Caracas, NGOs and local media say. 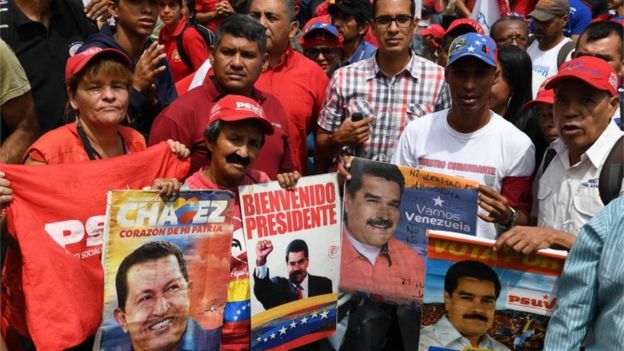 There were also pro-government protests in Venezuela

The UN Human Rights Office has said it is “extremely worried” by reports of security forces using “excessive” force against demonstrators.

“We call on all sides to show maximum restraint and on the authorities to respect the right to peaceful assembly,” spokesperson Marta Hurtado said.

But there were also pro-government demonstrations, with President Maduro saying workers were gathering across the country to celebrate May Day.

At the scene in Caracas

Juan Guaidó had appeared to be losing momentum but it seems that Tuesday’s events have revived his bid.

The La Carlota airbase, where the violent clashes took place yesterday, looks like a war zone. It was covered with broken glass and pieces of brick and stone, as well as bullet cases and gas canisters. There were burnt motorbikes and a burned-out bus blocking the street.

In the west side of the city there was a pro-government demonstration. Despite very few attendants at the last rallies called by the government, this one on Wednesday seemed to be full of their supporters. May Day has always been a very significant date for the leftist Venezuelan government – it is something they have traditionally marked.

The pro-government march was peaceful; there was a party atmosphere there, with music and dancing.

From there we went to a square in Altamira, an opposition stronghold. It was also full of people, peaceful protesters so far – although there are reports coming through of shots fired somewhere in the city. There were more attendants than in the last protests called by Mr Guaidó.

But the rest of the city was completely calm. We’ve seen people walking dogs and buying fruit. Some said they could not go to work on Tuesday because their employers told them not to go, but their areas have remained peaceful.

What happened on Tuesday?
Mr Guaidó posted a video showing him with a number of men in military uniform. He said he had the support of “brave soldiers” in Caracas.

He urged Venezuelans to join them in the streets, and appeared alongside another opposition leader, Leopoldo López, who has been under house arrest since 2014.

Supporters on both sides then gathered around Caracas throughout the day, and there were clashes between Mr Guaidó’s supporters and armed military vehicles.

Spain’s government later confirmed that Mr López and his family had sought safety in their embassy, but said the opposition figure has not claimed political asylum.

Chilean foreign minister Roberto Ampuero confirmed on Twitter he had initially come to their embassy but later transferred to Spain’s.

Is there a new cult of personality in Venezuela?
‘Like living in the apocalypse’
The bridge of desperation
Mr Guaidó, the president of the opposition-controlled National Assembly, has called on Venezuela’s military to back him, saying President Maduro is a “usurper” because he was re-elected in polls that had been widely disputed. 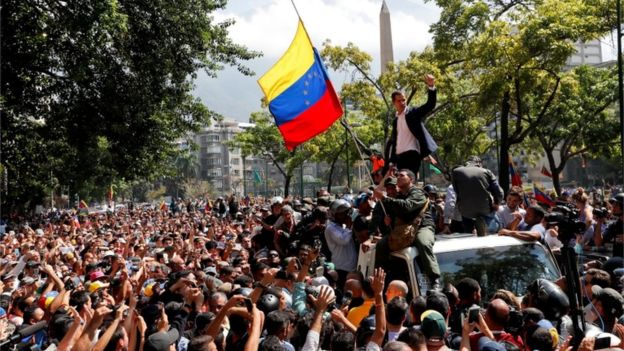 Mr Guaidó, pictured here standing on the car, has declared himself the interim president

What’s been the international reaction?
UN Secretary General António Guterres has appealed for both sides to avoid violence, while the EU has called for “utmost restraint to avoid the loss of lives and an escalation in tensions”.

The US has reiterated its support for Mr Guaidó.

Meanwhile, National Security Adviser John Bolton has accused Russia and Cuba of interfering in Venezuelan politics, claiming Mr Maduro was planning to flee to Cuba but was persuaded to stay by Moscow.

But both Russia and Mr Maduro rejected the claim, with a Russian foreign ministry spokesperson accusing the US of conducting an “information war”.

Mr Lavrov spoke to Mr Pompeo on the phone on Wednesday, warning him of grave consequences if the US took further “aggressive” steps in Venezuela, saying US “interference” in the country broke international law.

Governments who still back Mr Maduro – including Bolivia and Cuba – condemned Mr Guaidó’s efforts as an attempted “coup d’etat”.

The Mexican government expressed “concern about a possible increase in violence” while Colombian President Ivan Duque urged the Venezuelan military to stand “on the right side of history” against Mr Maduro.

An emergency meeting of the Lima Group of Latin American countries has been scheduled for Friday.