'Always a problem': Draymond Green is putting his stamp on the series

OAKLAND, Calif. — Before they were champions, before Kevin Durant came to town and before they built a billion-dollar arena across the bay, the Golden State Warriors changed the NBA with the “death lineup.”

It was five guys who could dribble, pass and score, applying a level of pressure to opponents that no one had really seen before. Of course, it was constructed around the singular shooting talent of Stephen Curry and Klay Thompson, but it was always made possible by the flexibility of Draymond Green.

This series with the Houston Rockets, which the Warriors lead 2-0 after a 115-109 Game 2 victory, has been a return to glory for Green. He’s been the best version of himself through two games and really for much of the postseason, which included a triple-double when the Warriors closed out the LA Clippers last week.

Warriors coach Steve Kerr, who had limited the renamed “Hamptons 5” lineup this season as he worked in DeMarcus Cousins, decided to make it the starting group for this series. It was something Kerr hadn’t done all season, a bold move with the stakes so high.

The decision placed a great load on Green’s shoulders, as he would have to play long stretches as the primary defender for Rockets center Clint Capela, a pick-and-roll demon who specializes in shedding defenders for lobs — a major facet of the Houston offense.

Kerr, though, had his reasons.

First, the Curry-Durant-Thompson-Green-Andre Iguodala lineup was the most effective of any of the groups the Warriors played in the four games against the Rockets during the regular season. But more importantly, Kerr knew that Green was in the best physical condition he’s been in at this point of the season in years. It’s been a bit of a turning-back-the-clock to those postseasons between 2014 and 2016, when Green was truly at the top of his game.

It has worked out beautifully thus far. Green is so light on his feet and focused that he’s able to be everywhere, the type of performance that made him a star. In this matchup, he can flash out to contain James Harden in screen situations and still recover quickly to get back to defend Capela’s lobs, nearly neutralized in the first two games.

His activity extends to rebounding, where he’s always been good, and especially at the offensive end, where he’s darting to beat opponents to open spaces as though he is 5 years younger than he is. He had five offensive rebounds on Tuesday and 12 overall to go with 15 points.

“[He’s] always a problem,” Rockets coach Mike D’Antoni said. “He’s an All-Star for a reason. He’s really good. Kind of a point guard at the center or forward position. He plays well. He’s a heck of a player.”

Well, not always. Green has been slowed by injuries over the past two seasons. Last season, a shoulder injury wrecked his shooting to the point where opponents basically stopped guarding him on the perimeter. A hip problem dogged him in the playoffs. This season, a toe injury and a sore knee slowed him down. He came into the season aiming to win the Defensive Player of the Year Award, but he wasn’t in good enough shape to seriously contend for it.

“All this year I don’t think I was in great shape at all,” Green said. “[I’m] really just locking in and focusing on my body; getting it healthy and ready for this time of year has been important.”

After the All-Star break, Green went on a strict diet and started ramping up workouts on off days. He lost more than 20 pounds in six weeks, and the difference is striking. His quickness and versatility from earlier in his career have returned. His shooting hasn’t fully recovered, but everything else has him looking like he’s in his prime again. 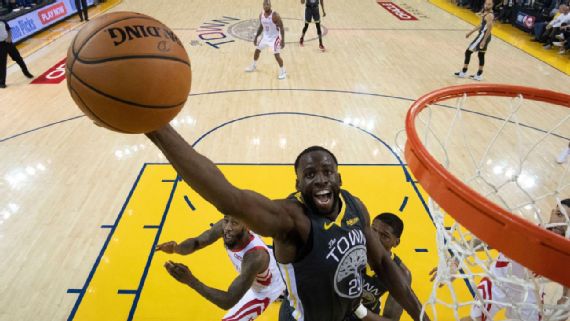 The Warriors are getting the best version of Draymond Green now that he is healthy again. Kyle Terada/USA TODAY Sports

“It feels good to step out there and not have an ache,” Green said. “Sometimes during the year, like the toe injury, every time you step on that toe, put pressure on it, it’s killing me. You kind of dread going on the floor.”

Green was surely motivated by the postseason and his desire to win a third consecutive championship. But there’s also his contract. Green signed a five-year, $82 million deal in 2015. That made him one of the star players who wasn’t able to cash in on the 2016 salary-cap spike that inflated salaries across the league.

One of the reasons the Warriors were able to afford Durant in 2016 was that Green was signed to a favorable deal the year before. Green hasn’t been afraid to point out that fact over the years.

Although he still has a season left on his deal, Green has been gearing up for contract extension talks this summer, as he will be eligible for an extension in the final year. He changed agents recently — hiring Rich Paul of Klutch Sports — to prepare for the talks, which have the potential to get complicated.

because even as Green believes he’s underpaid based on the changed market, his effectiveness and production have dropped over the past two seasons. With his mounting injury history and advancing age — he recently turned 29 — it is a little unclear what the Warriors would be willing to pay before he could test the free-agent market. That cloud is still on the horizon, but Green’s turning back the clock in recent weeks has accomplished sending the message that he’s still a valuable player. If he’s able to do it for a few more weeks and help the Warriors to a fourth ring, Green just might get everything that he wants. “I feel great out there. I think it’s showing in my play,” Green said. “But it’s a long road for what we want to do. Just got to continue to do the things that I’ve been doing, continue to try to bring it on the floor.”