By Gregg Re | Fox News

Warning, graphic video: Government vehicle runs over protesters in Venezuela
Venezuelan opposition leaders call for a military uprising against the government of President Nicolas Maduro; Rep. Adam Kinzinger warns of ‘hell to pay’ if the military cracks down on the Venezuelan people.

As Venezuela plunged into a dramatic televised scene of chaos and violence on Tuesday, President Trump warned he would impose a “full and complete embargo” and sanctions on Cuba if its troops do not cease operations in the ravaged South American nation.

“It’s a very delicate moment,” Bolton said, adding that “all options” remained on the table — including, potentially, a U.S. military intervention. “The president wants to see a peaceful transfer of power.”

Secretary of State Mike Pompeo told reporters Tuesday that Maduro had been on his way out of the country bound for Cuba, but that Russia told him to remain. Bolton, meanwhile, warned Russia against interfering.

The U.S. government said about 20,000 Cuban troops and agents have been working in Venezuela to prop up Maduro’s government, a figure disputed by Cuba. 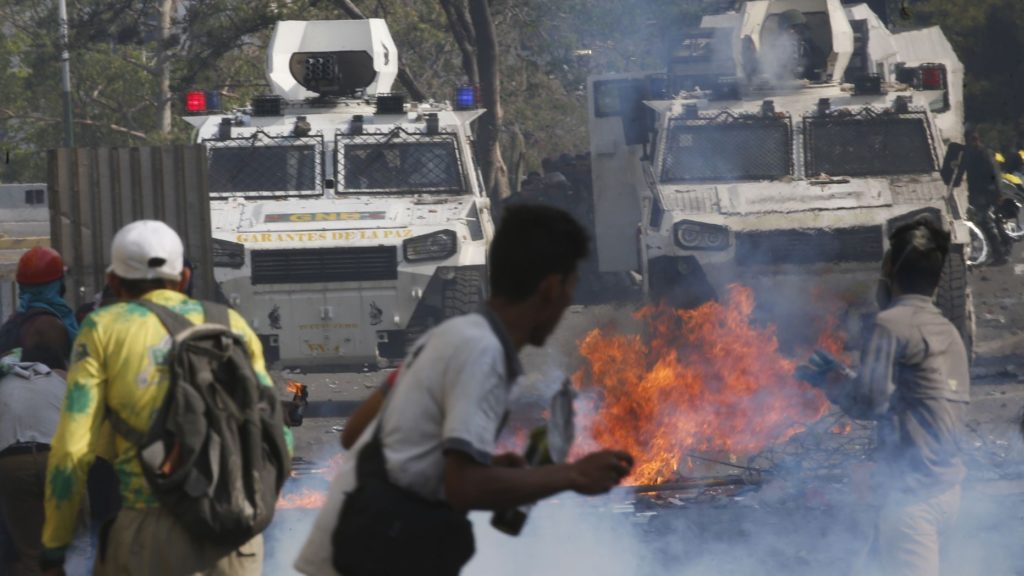 Opponents to Venezuela’s President Nicolas Maduro face off with Bolivarian National Guards in armored vehicles who are loyal to the president, during an attempted military uprising in Caracas, Venezuela, Tuesday, April 30, 2019. Opposition leader Juan Guaido took to the streets with a small contingent of heavily armed troops in a call for the military to rise up and oust Maduro. (AP Photo/Ariana Cubillos)

In February, Navy Adm. Craig S. Faller, commander of U.S. Southern Command, testified before the Senate Armed Services Committee that Maduro, fearing for his own safety, has “completely surround[ed]” himself with Cuban security.

“I think it’s a good sense of where the loyalty of the Venezuelan people are, that his immediate security force is made up of Cubans,” Faller told the committee.

If Cuban Troops and Militia do not immediately CEASE military and other operations for the purpose of causing death and destruction to the Constitution of Venezuela, a full and complete….

….embargo, together with highest-level sanctions, will be placed on the island of Cuba. Hopefully, all Cuban soldiers will promptly and peacefully return to their island!

In January, the White House announced billions of dollars in crippling new sanctions against Maduro and the country’s state-owned oil monopoly PDVSA, less than a week after Trump first acknowledged Guaido as Venezuela’s legitimate leader.

The White House has long linked Venezuela’s fortunes to Cuba. At a major foreign policy address earlier this year, Trump declared: “When Venezuela is free, and Cuba is free, and Nicaragua is free, this will become the first free hemisphere in all of human history.”

Trump continued, as the crowd roared: “The days of socialism and communism are numbered not only in Venezuela, but in Nicaragua and Cuba as well. Do we love Cuba? Do we love Nicaragua? Great countries. Great potential.”

The U.S. and about 50 other nations have taken the position that Maduro’s re-election last year was marred by fraud and he is not the legitimate president of Venezuela, a once prosperous nation that has the world’s largest proven oil reserves.

In January, the administration took the unusual step of recognizing Guaido, the opposition leader of the National Assembly, as interim president. It also imposed punishing sanctions on the country’s oil sector, deepening the country’s economic crisis.

Despite these and other measures, Maduro, the hand-picked successor to Chavez, has retained his hold on the country and the support of the security services.

That support had seemed to crack Tuesday with the launch of what the opposition was calling “Operation Freedom,” which began with the early-morning release of a short video of Guaido and Lopez alongside a few dozen national guardsmen urging people to “take to the streets.”

In a video broadcast live on telecasts across the world, an armored vehicle could be seen driving over the center of a road, hitting a crowd of demonstrators loyal to Guaido who were purportedly throwing rocks at security forces. Dozens of injuries have been reported.

Sen. Marco Rubio, R-FL., denounced the actions by Venezuelan security forces, saying that “military and security leaders must realize they are and will be held responsible for this,” he said on Twitter.

“What we are seeing today in Venezuela is the will of the people to peacefully change the course of their country from one of despair to one of freedom and democracy,” Pompeo tweeted in an early reaction. “The U.S. stands with them.”

Still, the Trump administration was caught slightly off-guard by Guaido’s decision to launch the campaign on Tuesday. Elliott Abrams, the special representative for Venezuela, said the administration had expected major marches and protests to take place on Wednesday for the May Day holiday.

Fox News’ Lucia Suarez Sang and The Associated Press contributed to this report.