Rockets star felt there were no-calls, but Warriors were also aggrieved
by: Shaun Powell 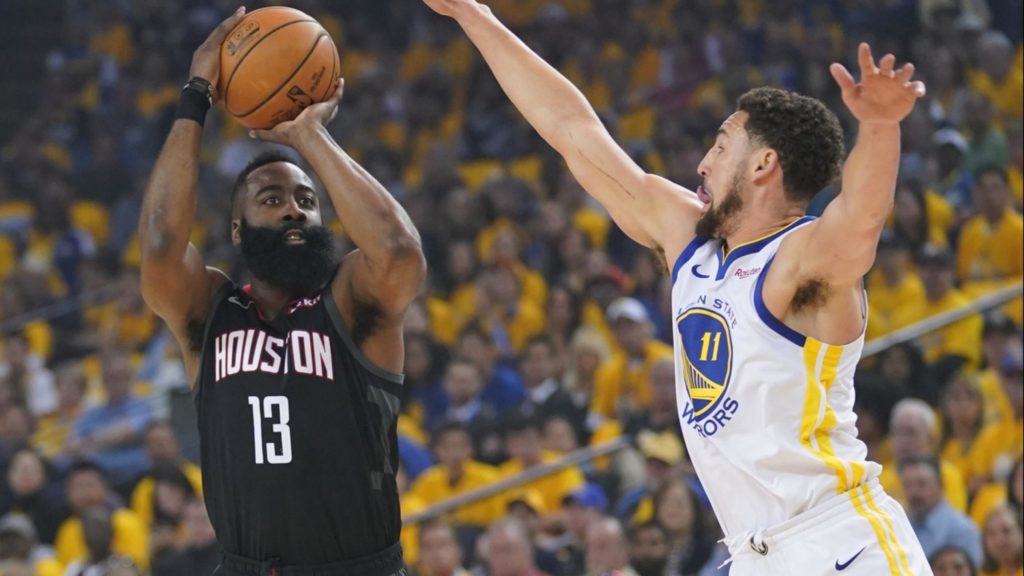 James Harden scored 35 points in Game 1, despite believing Warriors’ closeouts didn’t give him space to land.

OAKLAND, Calif. — This playoff series is one game old and we’ve already seen enough to know that when the ball’s in James Harden’s hands and there’s a Warrior in front of him, both are looking for help in the same place.

And that place is right in the eyes of the nearest official, which means if this keeps up, then it’s not Warriors vs. Rockets in the Western Conference semifinal, it’s Annoyed Player vs. Overwhelmed Referee. A perfect logo for Warriors-Rockets is a player (or coach) with outstretched arms, arched eyebrows, gaping mouth and bewildered expression.

The flavor of this highly anticipated Game 1 was noticeably salty and possibly pushy as well; that all depends on whether the league office believes an agitated Chris Paul brushed referee Josh Tiven during the tense, closing seconds of the Warriors’ 104-101 victory. If so, then the Rockets have bigger problems than falling behind 1-0 in the series; Paul might be facing a suspension.

Regardless of that ruling, what’s certain to endure is the game within the game — Harden’s tactics designed to draw fouls, the Warriors’ ability to avoid them (or not), the boundary-pushing of a shooter’s “landing space” and of course, the judgment of the men whose whistles serve as the final say.

Rockets coach Mike D’Antoni earned one of three Houston technicals, and Paul was hit with the other two and the ejection that came along. The game was chippy and the language was blue and at times the spectacle interfered with the spectacular, as in Kevin Durant’s continued scorching pace in the post-season: 35 points in this latest spree.

Much is on the line here. Harden is perhaps the toughest cover in the game, so crafty with the dribble, so stretchy with the shooting range, so knowledgable with his body and the angles which he uses to make contact and manipulate the officials. This is, of course, nothing new. This helped Harden win the Kia MVP last season and compile even more historical numbers and feats this season. This is his gift.

“He’s an amazing player,” said Steph Curry. “So the approach against him has to be the same, the attention to detail and the awareness of all five of our guys on the floor. We gotta try to wear on him as much as possible.”

This is someone who averaged 36.1 points a game and heavily controls the ball, dictating the Rockets’ flow and, by extension, their chances of winning games. When he doesn’t get the benefit of the doubt and/or becomes bogged down by inefficiency — and both were the case Sunday — the Rockets labor.

After making his pleas during the game, ones he felt fell on deaf ears, Harden reiterated postgame that he could use some assistance, and not just from Paul and Eric Gordon and Clint Capela.

“Just call the game the way it’s supposed to be called and we’ll live with the results,” Harden said, adding with some exasperation, “I just want a fair chance, man.”

But what is fair? That’s the question that could determine the length of this series or at least the manner in which the Warriors D-up. Coach Steve Kerr put Andre Iguodala in the starting lineup, hoping to get “Playoff Andre” – and for the most part, did – from a wise veteran who knows the ropes. Also, Iguodala was important because Klay Thompson, who normally would check Harden, is working on sore ankles and never played Harden in Game 1.

The second line of defense was Draymond Green, who combined with Thompson to hold Harden to just 9-for-28 shooting overall and 4-for-16 on threes. It was effective defense or, in Harden’s view, suspiciously effective.

Harden’s sticking point was his landing point, specifically the reasonable space that a shooter is given once he lands after a jumper. He felt that space was constantly violated, especially in the closing seconds of a three-point game when Green rushed him with a raised hand and then stood still while Harden’s kicking legs made contact with Green.

Foul or not? Well, the whistle stayed silent, so the answer was negative.

Harden raised the potential for injury and cited “we all know what happened a few years back with Kawhi,” meaning Kawhi Leonard, who was injured against the Warriors in similar fashion after making contact with Zaza Pachulia.

I’ve been fouled by James on a James 3-pointer before, so I ain’t trying to hear that. When you land three feet ahead of where you shoot the ball from, that ain’t my issue.
DRAYMOND GREEN

Of course, once relayed by media, this drew a reaction from some of the Warriors. Green turned comical and said loudly: “Huh?”

He added: “I’ve been fouled by James on a James 3-pointer before, so I ain’t trying to hear that,” Green was referencing moments when Harden either leans into a defender or whip-kicks a leg, forcing that determination of who initiated contact and whether it necessitates a whistle.

Green said Harden is deliberately stretching the landing spot in order to get calls. Does that landing space become an airport runway?

“When you land three feet ahead of where you shoot the ball from,” Green said, “that ain’t my issue.”

Such is the challenge of guarding and officiating a game with Harden in it.

“You have to figure out how they’re calling the game and you adjust as the series goes on,” Iguodala said. “Try to figure that out earlier than later. And he’s a great player so you need patience and being disciplined. We’ve got a great defensive unit with good individual players, but the league is geared toward offensive players and I’m not as good defensively as James is offensively, so I got to rely on help. I know Draymond is behind me and has my back.”

Whether or not he’s getting the calls, the issue for Harden remains the same in these playoffs: His shot is faultier than usual and he’s being forced to work harder for the ones that do fall. His shooting percentage has dropped from 44.2 percent in the regular season to 36.4 percent in the playoffs. Even if Harden gets to the free throw line, and he attempted 14 in Game 1, the Warriors will take that every time.

The goal is to get him to miss far more than he makes, which minimizes the chances of him dropping 40 or 50 points and completely breaking down the Warriors’ defense.

“You have to be very disciplined,” Kerr said. “And you have to be able to play without putting your hands on the cookie jar.”

Certainly, Houston needs more. There’s also the potential impact of Paul, who was mostly neutralized and made only five baskets. He never hurt Golden State but, depending on the determination of the league office about that murky contact with the ref, he might hurt the Rockets if socked with a suspension.

Also, the Warriors took away the damaging lob passes that Harden sneaks to Capela; he only scored one basket and played just 26 minutes because the Warriors never really had a true center on the floor — and appear ready to go this entire series without one.

Harden and the Rockets can continue to work the referees and bark at calls they feel are unfair and maybe it’s all with some justification. Or there’s another choice in this series.

“We just need to suck it up and not worry about how they officiate and take it, yeah,” said D’Antoni.

He was being sarcastic. Possibly.