The Portland Trail Blazers Visit the Denver Nuggets in the Western Conference Semi-Finals round 2 game 1 on Monday night at Pepsi Center. 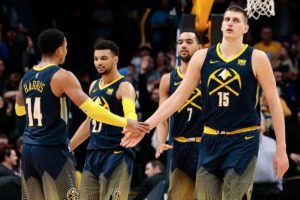 McCollum played in three of the four contests against the Nuggets this season. His first game against Denver was one of his best performances this season – McCollum destroyed the Nuggets in Portland for 33 points but the Trail Blazers still lost by one. He scored a pedestrian 18 points in the second meeting resulting in a loss and ironically enough, one of his worst performances of the season where he scored nine points in his final meeting with Denver, resulted in a win.

After defeating the San Antonio Spurs 4-3 in the first round, the Denver Nuggets have setup a second-round matchup against the Portland Trail Blazers. The two teams are more than familiar with one another, as a division rivalry has been brewing for several seasons, further intensifying this series.

Although most of the games have been close, Denver has had plenty of success against Portland over the past two seasons. The Nuggets have won six of the past seven games, with the one Portland victory coming in a game in which Denver rested Nikola Jokić, Jamal Murray and Paul Millsap.

The games were high-scoring and offense-oriented. After posting an offensive rating of 112.1 throughout the course of the regular season, the Nuggets dropped a 117.2 offensive rating in the four games against Portland. The strong offensive performance was mainly a result of hot shooting, as Denver connected on 49 percent of shots from the field and 38.4 percent from three.

Jokić’s season series against Portland is highlighted by his 40-point performance in mid-January. In that game, the 24-year-old dropped 40 points on 15-of-23 shooting, while he also grabbed 10 rebounds and dished out eight assists. All indications are that Kanter won’t be able to contain Jokić in one-on-one defense, which will likely for Portland to send double-teams

Nuggets have an advantage when the bench units are on the floor. Denver finished the regular season 13th in bench scoring, Denver’s bench averaged 28.9 points per game in the seven-game series against San Antonio.

Nuggets are 8-2 ATS in their last 10 home games vs. a team with a winning road record