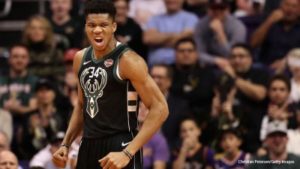 Boston Celtics will face milwaukee bucks in second round game 1 . Milwaukee has homecourt advantage and the series will begin at Fiserv Forum.

The Celtics’ second-round NBA playoff date with the Bucks is already is set after both teams swept their first-round series. Every other first-round series is still going, though, and the NBA has confirmed Boston-Milwaukee won’t start until either Saturday or Sunday.

The Bucks, the East’s No. 1 seed, had the best record in the NBA last season (60-22) and faced little resistance in their first-round matchup. They easily swept the Detroit Pistons in four games.

Bucks will be a tough opponent for the Celtics. Potential league MVP Giannis Antetokounmpo is a matchup nightmare, and he averaged 27.7 points, 12.5 rebounds, and 5.9 assists per game during the regular season. And around him, the Bucks have solid depth.

In their regular season series, the Celtics posted only a 1-2 record against the Bucks, winning their first meeting in November but coming up just short in their other two games. Antetokounmpo averaged 31 points per game against the Celtics, so slowing him down will be key to finding success in the series.

This is the second year in a row that the Celtics will play the Bucks in the playoffs. Last year, the No. 2 seeded Celtics defeated the Bucks in a series that spanned seven games. The home team won every game in that series.

Over the span of the regular season, the Bucks and Celtics met three times, with Boston winning at home 117-113 in the first matchup. Milwaukee evened up the score in the second meeting, a 13-point road victory, while also winning a close one at home back in February by just one point.

there’s a chance dates and times can be changed depending on when the opening round wraps up. As Sports Media Group points out, conference semifinals matchups could potentially be moved up to April 27-28.

8-2 straight up and 7-2-1 ATS in its previous ten road encounters with the Central Division.

The Bucks are 9-0 straight up and 7-1-1 ATS in their last nine contests when listed as double-digit favorites.

Bucks are 6-2 straight up

5-3 ATS in their previous eight games in the postseason

3-6 straight up and 4-5 ATS in their last nine playoff games on the road.