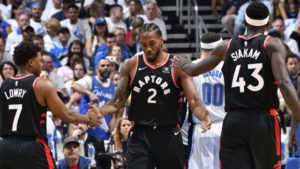 The Toronto Raptors face the Orlando Magic in Game 5 at the Scotiabank Arena on Tuesday night.

Toronto Raptors steal the thunder from Orlando Magic in Game 4 Raptors are now 3-1 in four games with Magic. Raptors have dug their claws in the idea of winning. They have been successful in both Game 2 and Game 3

the stats indicates that the Raptors are the team that is much better prepared to win the game. Raptors tend to outscore their opponents quite well, although the average is not so bad for either team Toronto 103.3 points per game Orlando 93 points per game

Kawhi Leonard who has been recovering from an illness, but managed to strike the inspiring comeback to his best last night as he led the team with 34 points on 12 of 20 shooting, Norman Powell and Pascal Siakam each scored 16 points while Kyle Lowry chipped in with just nine points and nine assists.

The Magic are averaging just 86.7 points during their three straight setbacks, scoring 85 or fewer points in two of the losses. Magic allowed a 16-2 series at the start of the clash and couldn’t recover ever after. They were down by 12 points at halftime and lost the third quarter 39-27.

Gordon scored 25 points on 10-of-17 shooting in Game 4 for his second 20-point outing of the series. Ross was one of the struggling players in Game 4 as he scored just five points in 31 minutes after averaging 19.5 points over the previous two games.

The Raptors has a big chance to advance in second round they had the momentum in this series.

Magic are 2-5 ATS in their last 7 Tuesday games