Palace: Pangilinan is ‘deaf and blind’ to Duterte’s achievements 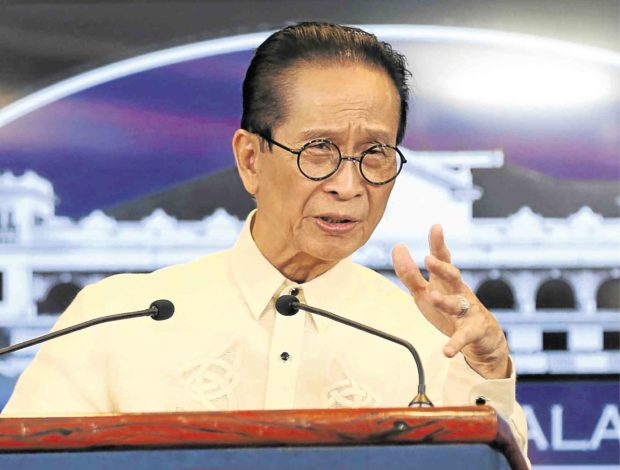 MANILA, Philippines — Sen. Francis Pangilinan is “deaf and blind” to the achievements of the Duterte administration, Malacañan Palace said on Saturday.

“Like the other critics and detractors, Senator Pangilinan is deaf and blind to the unprecedented survey numbers of the President,” presidential spokesperson Salvador Panelo said in a statement. “It is about time he and others in the opposition wake up from their self-destructive illusion lest they are swept away to oblivion by the horses of change galloping in the country.”

“Senator Francis Pangilinan’s claim of diversionary tactics with regard to the remarks of PRRD [Presidential Rodrigo Road Duterte] on senatorial candidate Mar Roxas and other opposition’s candidates is noxious nonsense,” Panelo said.

Panelo said that achievements of Duterte’s administration exceed those of the administration of former President Benigno Aquino III, noting the Mamasapano clash and destruction of Typhoon Yolanda happened during the latter’s leadership.

“The achievements of the administration far exceed that of the administration of his idol, PNoy [Aquino], where incompetence and trust issues among its top officials were prevalent, such as what were exhibited during the Mamasapano incident and the destructive storm Yolanda, an incontrovertible truth that is beyond forgetting,” the Palace official said.

Panelo said previous administration’s programs would “pale” in comparison to President Duterte’s “war on drugs, on criminality, on corruption, and on terrorism as well as his Build Build Build infrastructure program.”

Duterte also blasted Roxas again, blaming the former chief of the Department of the Interior and Local Government for the killing of 44 Special Action Force (SAF) troopers in the 2015 Mamasapano massacre.