Right, Left and Center React to the Mueller Report 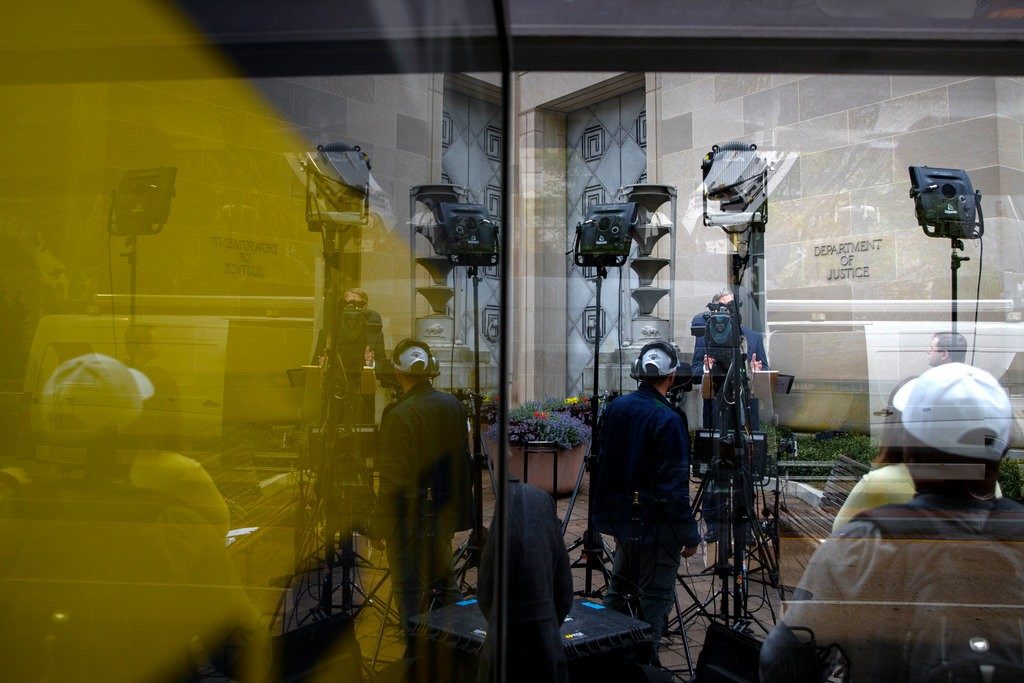 Journalists outside the Justice Department on Thursday.CreditCreditTom Brenner for The New York Times

The political news cycle is fast, and keeping up can be overwhelming. Trying to find differing perspectives worth your time is even harder. That’s why we have scoured the internet for political writing from the right and the left that you might not have seen.

From the Right
The editorial board of The Washington Examiner

“The Mueller report exposes in Trump some of the same flaws Hillary Clinton possessed, which we feared would compromise her potential presidency: a total aversion to transparency rooted in either actual guilt or serious paranoia.”

The Washington Examiner said in an editorial that it remained “theoretically possible” that President Trump had colluded with Russia.

But it said the more likely scenario — that he was angry about the inquiry, tried to shut it down and ordered his aides to lie — was still so bad that it reminded the editors of Hillary Clinton.

“This explanation does not leave Trump looking good,” the editorial board wrote, later adding: “That is unbecoming and worrisome. Moreover, it is unethical to pressure others to lie, even when the lies are not under oath.”

“This is now a political fight, not a question of criminal justice, and it will be settled politically. The House can impeach. Or the House can move on. Your call, Madame Speaker.”

The investigation by the special counsel, Robert S. Mueller III, began because “there was smoke (maybe just the smell of smoke),” but it found “no fire,” Mr. Williamson wrote.

Ultimately, he argued, the inquiry — and the fervor it inspired among Democrats — was a political project that liberals engaged in to make themselves feel better about “getting beat fair and square by Donald Trump” in 2016.

“This seems to me to be more about Democrats continuing to tell themselves a comforting fairy tale about why they lost in 2016, and where they really stand politically,” he said.

And he wrote that Democrats’ “current commitment to grasping at straws in this matter is, politically speaking, the best news the Trump campaign has had in weeks, the report itself notwithstanding.

“If we’ve learned anything over the past two and half years of RussiaGate, it’s that Democrats will not accept any result short of removing the president from office. No amount of legal exoneration will stop the political witch hunt.”

Writing on Fox News’s website, Mr. diGenova, an informal adviser to President Trump, described the special counsel’s investigation as an anti-Trump conspiracy committed to “weakening the president politically by whatever means necessary.”

Now that it is over, he said, the administration should “go after the real conspirators.”

Mr. diGenova, a former United States attorney for the District of Columbia, said Attorney General William P. Barr should now investigate the special counsel’s investigation, which he archly described as a plot by “career lawyers” at the Justice Department and the F.B.I. along with outside actors.

From the Left
Amanda Marcotte in Salon

“But there’s no chance that anyone actually changes their mind about what they think happened between Russia and the Trump campaign based on anything that happens on Thursday.”

Ms. Marcotte was one of many on the left who criticized the rollout of the report, which began on Thursday morning with a news conference by Mr. Barr shortly before the report was made available to the public.

That, combined with Mr. Barr’s “word games” and repeated insistence that the Trump campaign had not colluded with Russia, led many on the left to see him as something more akin to “Trump’s defense attorney,” she wrote.

And she lamented that the country’s political polarization meant that few minds would probably be changed by the release of the report.

“Barr’s blatant whitewash will only make liberals more likely to believe Trump is hiding something sinister, while Republican voters will either back the ‘no collusion’ storyline or admit, at least in private, that they don’t even care if there was a conspiracy or not,” she wrote.

“During the election, when it mattered the most, Trump and his folks kept saying there was no Russian assault. They echoed Putin’s disinformation: Moscow is doing nothing. That provided cover for the Kremlin and helped it get away with this operation.”

Mr. Barr missed the point of the Russia investigation by focusing on whether the Trump campaign cooperated with Russia’s election interference instead of “whether Trump and his crew helped the Russian attack in other ways,” Mr. Corn argued on Thursday.

Mr. Corn summarized what has been established about Trump campaign members’ activities: They “echoed Putin’s disinformation” by denying repeatedly that Russia was interfering in the election; Donald Trump Jr., Paul Manafort and Jared Kushner met with a Russian emissary who offered them damaging information on Mrs. Clinton; and George Papadopoulos, a foreign policy adviser, tried to establish an “off the record” connection between the campaign and the Russian government.“None of these facts are disputed,” Mr. Corn wrote. “They raise the question: If Trump and his aides did not commit crimes, did they still engage in treachery and betrayal?”

Stephen A. Crockett Jr. in The Root “Literally, the president, arguably the dumbest man in politics, has played us all and I can do nothing but applaud his efforts.” Mr. Crockett expressed the disappointment felt by many liberals, who had hoped the release of the Mueller report would be the day that “confirms everything that those of us who didn’t vote for Trump already knew, that the president of the United States colluded with Russian operatives to steal the 2016 election.” To make matters worse, Mr. Crockett wrote, the attorney general repeated one of the president’s favorite phrases — “no collusion” — at Thursday’s news conference, which seemed meant to shape the public perception of the report before its release. “What was supposed to be a non-partisan investigation into a foreign superpower stealing an election from the American people has been turned into political theater,” Mr. Crockett wrote. “And somewhere, Russian President Vladimir Putin is sitting back watching his work and laughing at all of this.”

And Finally, From the Center Andrew McCarthy in The New York Post “The most remarkable thing about special counsel Robert Mueller’s 448-page report is how blithely the prosecutor reversed the burden of proof on the issue of obstruction.” Mr. McCarthy, a former federal prosecutor, said Mr. Mueller was guilty of “an outrageous shifting of the burden of proof” because he had declined to determine whether the president had obstructed justice. If the special counsel believed there was evidence of a crime, “he should have had the courage of his convictions and recommended charging the president,” Mr. McCarthy wrote. If he thought there was not evidence of a crime, he should have said that.

“Anything else was — and is — a smear,” he wrote. “Worse than that, it flouts the Constitution.”

“Russia sought to undermine our election system the same way they’ve spread disinformation since the Cold War. They didn’t need help from the Trump campaign to do so in 2016. And they won’t need it in 2020, either.”

Russian interference in the 2016 election created “a tectonic widening of the political divide” that has led some conservatives to denounce Russia’s aggression as a hoax. But Russian interference is very real, Mr. O’Neill, a former F.B.I. counterintelligence operative, wrote. And it has been happening for decades.

He outlined some little-known examples from the 1980s, when the K.G.B. sent fake letters, purportedly from the Ku Klux Klan, to African athletes at the 1984 Summer Olympics in Los Angeles, and when Russian disinformation campaigns spread rumors that H.I.V. was created by the Pentagon and that federal law enforcement was involved in the Kennedy assassination.