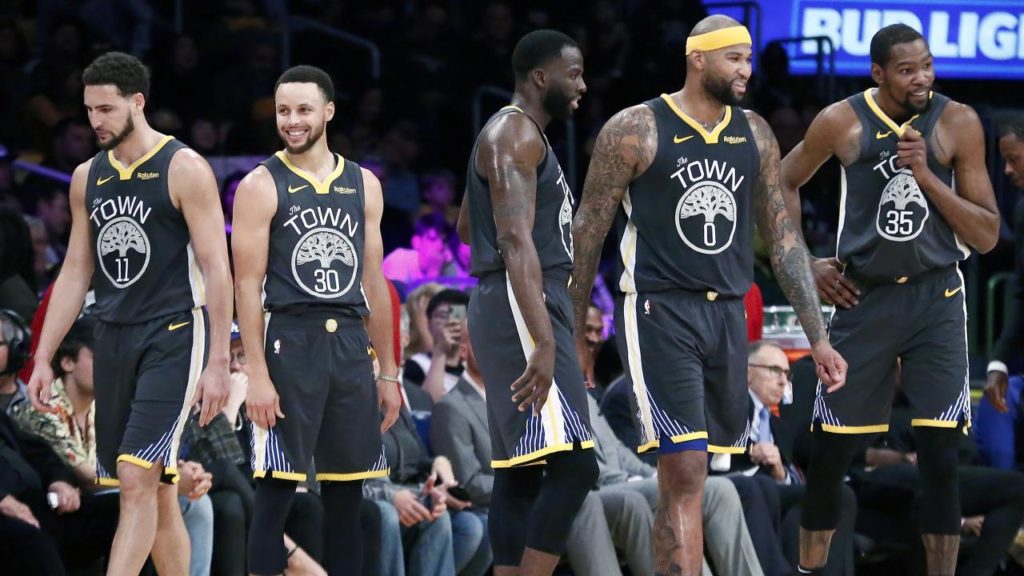 The Golden State Warriors are set to begin their quest for a third consecutive NBA title.

Now that the necessary yet annoying inconvenience of the 82-game regular season is thankfully out of their way, let’s check in on the Golden State Warriors and see how and if they survived.
The Warriors clinched the best record in the Western Conference, which means the road to the NBA Finals will be the 880 Freeway, which during weekday rush finally gets unclogged right around halftime at Oracle Arena. Home court is secured.

Warriors-Clippers series preview | Warriors-Clippers series hub
Steph Curry’s shooting percentages from the floor and 3-point range and free-throw line are 47, 44 and 91. Yep, like a chimney, still smoking.
Kevin Durant for the 11th straight year is averaging north of 25 points and for the second time in three years is testy about folks crystal-balling his future plans as a pending free agent. OK, fine.
Draymond Green has 16 technical fouls, tied for the league lead. All good here.
Klay Thompson is smooth with the shooting stroke — 21 points a game despite a rough start — and remains mellow in all other facets of life. Chill.
DeMarcus Cousins, 14 months removed from a torn Achilles, is upright instead of horizontal. Let’s Boogie.
In all, the Warriors are healthy first and foremost, feeling frisky for the most part, and completely restless after being bored out of their minds for seven months. Somehow, they made it through (as you knew they would) and now here they are, ready to make it three straight championships and four in five years.
Is there anything or anyone capable of standing in their way?

Come to think of it, yes: The Warriors themselves.
If the Warriors are unable to pop corks in June or burst the bubble of opposing teams with big dreams, it’ll probably be because somehow, the Warriors screwed up. They’ll either underestimate someone (most likely the surging Rockets) or overreact to questionable officiating calls or … or … well, that’s about it. Anything beyond that or a major injury just seems improbable at this point. Once again, the Warriors are that good, that far beyond the field.
Yes, there is the chance another team might catch fire and pull a surprise or two, which means the Warriors are fortunate this isn’t the NCAA Tournament. This is Big Boy Playoff Basketball, a seven-game series, where the best team usually wins. You must beat the Warriors four times. Again, there are often circumstances that tweak that theory, such as 2016 when Green served a one-game suspension and Andrew Bogut suffered an unfortunate injury and the Warriors lost the championship series in seven to the Cavaliers. Otherwise …
“We’ve put in some new sets that we feel good about,” said Durant. “We’re ready to get started and see where this takes us.”
The Warriors once again are flexing the rare combination of fundamentals and flash, a team that can play any styles, and one that doesn’t bring an apparent weakness that will give coach Steve Kerr reason for pause. Curry and Durant took turns being in the conversation for MVP at times this season and although neither is James Harden or Giannis Antetokoumnpo, neither seem to care much about it, either. That shows their growth and where their priorities lie. The two resident superstars know the Gods paired them together for one reason, and so far after two years and counting, neither player has failed to deliver on that reason.
The last team to win three straight titles was the Kobe Bryant-Shaquille O’Neal Lakers almost two decades ago. There was always a simmering of tension between Kobe and Shaq as that dynasty wore on, and it eventually contributed to their breakup. Not so with Curry and Durant; if KD leaves this summer, it won’t be because of an ego clash with his very accommodating co-star.
The sixth regular season under Kerr was not without a few paper cuts. The Warriors were, for some reason, far too quick-tempered regarding the referees. Borderline calls that didn’t go their way were met with smirks, confrontations and behavior unfitting for champions who shouldn’t sweat the small stuff. Durant has been particularly petty; his 16 technicals not only ties notorious hot-head Draymond for the league lead, but it’s by far the most he’s collected in a single season. Is it because the free-agent chatter is getting to Durant? Theories abound.
Also, the bench lacks the same pop it had in years past. Golden State has a lethal starting five but the “Strength In Numbers” motto might not apply this time. Shaun Livingston is older and on the verge of calling it quits and the young talent being groomed hasn’t, for the most part, distinguished itself. The addition of old friend Andrew Bogut should help; Bogut returned to the Warriors in tremendous shape and as usual with a quick-trigger wit that goes over well in the locker room.
Yet this team overall still wears the look of a Goliath. There’s five All-Stars on the floor at tipoff and a pair of MVPs. No other team can match that, and to continue the discussion, Kerr has shown an ability to push most if not all the right buttons this time of year.
Mostly, the signs of motivation, which waned as expected over the last six months, are sure to surface again, given the stakes. Most of the Warriors’ core have the opportunity to one day walk away from this game with at least three championships and that could give those players — a role player such as Green, for instance — credibility for entry into the Basketball Hall of Fame.
“When you get to this point,” said Curry, “there is temptation to enjoy the moment, and we do have appreciation for what we’ve done, but theres also more to do.”
Their path to June doesn’t appear any more treacherous than before. There’s no superteam standing in their way, no prime LeBron James — or LeBron, period. Those teams bringing 50-plus wins this season to the dance are certainly capable of Golden State’s respect, yet lacking in championship pedigree: Milwaukee, Toronto, Denver, Philly. They have not Been There and Done That. There’s only one team that in the past gave the Warriors the shivers, and that’s Houston. If the seedings hold firm, the Warriors will see the Rockets the second round, which is in the Warriors’ favor because they’ll be fresh. And Chris Paul’s body clock alarm might be ready to go off again.
Plus, this year the Warriors are bringing Cousins along for the ride and there might be a few games along the way where he takes the wheel or at least rides shotgun. Clumsy and wheezing two months ago from all the rehab, Cousins seems more assured of his body and his reclaimed game. He also knows he’ll be given as many chances as possible to (a) help the Warriors win a title, and (b) make some money for himself. Actually, those two go hand-in-hand.

Of course, there’s the matter of the elephant in the room, which is: This Might Be It for the dynasty. Yes, Cousins is certainly walking out that door in July to cash in because he can’t do so with the Warriors due to quirky salary cap rules. And then there’s Durant, who has refused to commit verbally or otherwise to the Warriors because evidently there’s something else out there that interests him. As for Thompson, who has verbally committed to the Warriors, there’s still a matter of money and what it will take to keep the brothers splashing. But that’s a story for another day, say, July 1, when the Warriors’ house of Lawrence O’Brien trophies could come crashing down. They’ll worry about that then. In the meantime, it’s mid-April and the start of yet another awakening in Oakland. The Warriors are rising from their regular-season nap and finishing their final yawns and readying for the hunt. As we’ve seen from this team before, playing the regular season is tiring. Playing for the championship is reinvigorating.