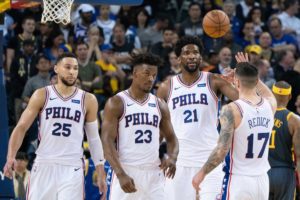 The Philadelphia 76ers will open the 2019 NBA playoffs at home on Saturday against the Brooklyn Nets The 76ers finished the regular season 51-31 and look to take care of the Nets to defend their home floor here.

The 76ers enter this game 4th in scoring offense with an average of 115.2 points per game. Philadelphia is 4th in rebounding with 47.8 boards per game and stands 4th in assists with 26.9 per contest.

Sixers are the more talented player. However, the Sixers also have one of the league’s least productive benches, while the Nets are on the opposite end of that spectrum and have the second-best bench in the entire NBA in terms of points per game. The series will come down to if the Sixers’ top-tier talent can outweigh a more-balanced Brooklyn attack.

The Brooklyn Nets are back in the playoffs for the first time since 2015, but they face a tall order against the Philadelphia 76ers, who have their sights set on a championship. The Nets’ remarkable turnaround morphed into 42 victories , they finished the regular season 15th in the league in scoring offense with 112.2 points per game.

Russell has enjoyed a breakout year, leading the Nets in scoring and assists, but will he be able to maintain that level of play in the post-season? The Nets are a deep team and have plenty of options to turn to, but Russell’s ability to create shots for himself and his teammates will be their key to victory.

The Nets are talented enough to keep this series interesting, as two of their strong points depth and guard play  happen to be weaknesses for Philadelphia. However, at the end of the day, the Sixers have more elite talent than the Nets, and in the playoffs teams tend to rely much more on their key contributors, which works in their favor. The Nets — and specifically Russell — will make the Sixers uncomfortable at times, but ultimately Philadelphia will take care of business.