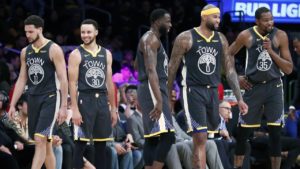 The pairing of the top- and eighth-seeded teams pits the Warriors, the two-time defending champions, against a Clippers club that has beaten them once in each of the last two seasons.

Golden State was one of the best offensive teams in the NBA this season and averaged 117.7 points per game, which was second in the league. The team shot 49 percent from the field and 38 percent from three-point range.The Warriors’ starting lineup Curry, Cousins, Thompson, Durant, and Draymond Green — allowed just 95.1 points per 100 possessions after the All-Star break, making it the best defensive lineup among those that played at least 100 post-break minutes. Steph Curry, Kevin Durant, and Klay Thompson all averaged 20 plus points per game and DeMarcus Cousins is grabbing 8.2 rebounds. Defense has been an issue in the last two regular seasons and Cousins’ ability to defend in space could be a question mark. But the Warriors’ ability to lock down defensively with their five most talented players on the floor over the last seven weeks is not a good sign for those hoping that their title run will come to an end prematurely..

Both teams come into this series with no significant injuries to report.

The Clippers are among the league’s least-threatening 3-point shooting teams and their designated bail-out artists are their best shooters from distance: Williams and Danilo Gallinari. The latter had a solid season — 19.8 ppg with 43.3 percent shooting on 3-pointers — and is one of the more underrated players in the game.

The Clippers will be prepared for this series because that’s how Doc Rivers-coached teams roll. He should be a strong favorite for Coach of the Year for the way he steered his club and made the necessary changes after the trade deadline to keep the Clippers moving forward. Which means, the Clippers should make for a few suspenseful finishes and that’s a victory in and of itself.