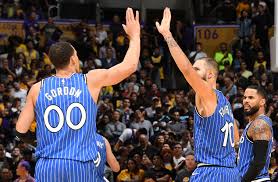 The Orlando Magic and Toronto Raptors meet Saturday in game one of the NBA playoffs at the Scotiabank Arena.

The Orlando Magic will be at full strength for their first-round playoff series against the Toronto Raptors. The Magic announced late Thursday night that forward Jonathan Isaac cleared concussion protocol and can play against the Raptors Saturday. The Magic went through workouts Thursday without.

Matchups:
Leonard shot just 20-of-47 (42.6 percent) against the Magic during the regular season and averaged 18.0 points, nearly nine points worse than his season average. Siakam, meanwhile, struggled even more, going 13-of-38 (34.2 percent) while averaging 8.8 points, more than eight points below his season norm. Gordon has always fared well again Leonard, a three-time NBA All-Star and the 2014 Finals MVP. Leonard has made just 17 of his 40 shots in his career when Gordon has been the closest defender to those attempts, including going 10-of-24 this season, per Second Spectrum tracking data. Siakam, similarly, hasn’t been able to get into a rhythm when Isaac has guarded his shots, making just two of his 11 attempts from the field.

Limit Turnovers :
The Raptors ranked fourth in the NBA in fast break points and ninth in points off turnovers. They make opponents who don’t take care of the ball pay. The Magic were the fifth best when it came to limiting turnovers, something that will be necessary throughout this series. Toronto also took the third most shots in the league in transition, only behind Sacramento and Oklahoma City. Siakam, specifically, is one of the best in the league at racing down the floor and catching outlet passes before finishing on the other end.

3-Point Defense
Adding Marc Gasol at the trade deadline made the Raptors a better long-distance shooting team. Toronto shot nearly 41 percent after the deal, which was the best mark in the NBA during that period. Gasol himself is a very good outside shooter, as he made 44.2 percent of his attempts from beyond the arc after the move from Memphis.

Regardless of whether it’s Gasol or Serge Ibaka on the floor, Toronto can play five-out, helping them make an abundance of threes when its ball handlers attack the lane considering there’s nobody there clogging the paint. The Raptors connected on the most 3-pointers in the league this season by way of kick-out passes, drilling 371 of them, per data. Toronto’s best drive-and-kick tandem was Kyle Lowry and Danny Green, a duo that converted on 16 of their 25 3-point kick-out attempts.

The Raptors were extremely good at making halftime adjustments this season. After the start of the calendar year, Toronto had the league’s second best plus-minus, only behind Golden State, in third quarters. During that quarter from Jan. 1 until the end of the season, the Raptors shot a league-best 41.9 percent from downtown while averaging nearly 30 points.

They compiled 13 wins throughout the season when trailing at halftime. Only the Bucks and Pistons from the Eastern Conference overcame halftime deficits that many times. The Magic accomplished this 12 times.

It’s no secret that the Raptors have struggled in playoff Game 1s. They are currently 2-13 in the first game of a series in their franchise history. When they went to the conference finals in 2016, they lost all three Game 1s throughout that playoff run. Jumping out to an early lead will put extra pressure on Toronto. An early advantage will also help quiet the crowd at Scotiabank Arena, where the Raptors were 32-9 in the regular season.