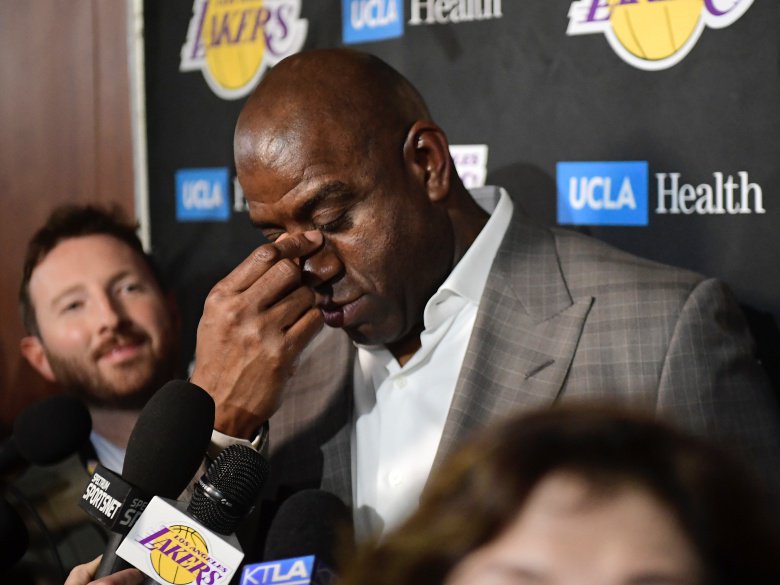 Magic Johnson  wipes his eyes as he speaks to reporters prior to an NBA basketball game between the Los Angeles Lakers and Portland Trailblazers on Tuesday, April 9, 2019,  in Los Angeles. Johnson abruptly quit as the lakers’ president of basketball operations Tuesday night, citing his desire to return to the simpler life he enjoyed as a wealthy businessman and beloved former player before taking charge of the franchise just over two years ago. (AP PHOTO/MARK J. Terrill)

Johnson didn’t tell owner Jeanie Buss or general manager Rob Pelinka about his shocking decision before he announced it in front of reporters about 90 minutes before the final game of the Lakers’ sixth consecutive losing season. Los Angeles was 37-44 heading into its game against Portland, missing the playoffs yet again despite the offseason addition of LeBron James.

“I want to go back to having fun,” Johnson said before fighting off tears. “I want to go back to being who I was before taking on this job. We’re halfway there with LeBron coming (last summer). I think this summer, with that other star coming in, whoever is going to bring him in, I think this team is really going to be in position to contend for a championship with the growth of the young players.”

Johnson didn’t directly tie his decision to the future of Luke Walton, but the third-year coach was widely expected to be fired by Johnson. Without using names, Johnson repeatedly mentioned Buss’ affinity for Walton, who was in place before Johnson got the job in February 2017, and Johnson’s desire not to cause upheaval between the owner and her chosen coach.

“(On Wednesday) I would have to affect somebody’s livelihood and their life,” Johnson said. “And I thought about it and I said, ‘That’s not fun for me. That’s not who I am.’ And then I don’t want to put her in the middle of us, even though she said, ‘Hey, you can do what you want to do.’ I know she has great love for him and great love for me.”

Johnson and Buss had a three-hour meeting Monday (Tuesday, PHL time) about the direction of the 16-time NBA champion Lakers, who haven’t made the postseason since 2013. Magic claimed he didn’t finalize his decision until Tuesday morning (late Tuesday, PHL time).

“Somebody is going to have to tell my boss, because I know she’s going to be sick,” Johnson said. “But I knew I couldn’t face her face-to-face and tell her.”

Buss didn’t attend the Lakers’ season finale, although Johnson waited by the executive parking area at Staples Center in hopes of seeing her. Buss tweeted her reaction at halftime.

“Earvin, I loved working side by side with you,” Buss wrote. “You’ve brought us a long way. We will continue the journey. We love you.”

“There is no greater Los Angeles Laker than Earvin Johnson,” it said. “We are deeply grateful to Magic for all that he has done for our franchise as a player, an ambassador and an executive. We thank him for his work these past two years as our President of Basketball Operations and wish him, (wife) Cookie, (children) Andre, EJ and Elisa all the best with their next steps. He will always be not only a Lakers icon, but our family. As we begin the process of moving forward, we will work in a measured and methodical fashion to make the right moves for the future of our organization.”

Johnson’s desire for his old life wasn’t the only reason for his departure. He also said he is tired of being investigated or fined by the NBA for tampering when he comments on basketball on Twitter or even speaks to another organization’s player. Johnson, a longtime broadcaster and respected basketball figure before moving into the front office, has been investigated four times for tampering after everything from a joking comment about Paul George on Jimmy Kimmel’s talk show to his response to an email sent to him by Philadelphia’s Ben Simmons. “I thought about Dwyane Wade retiring (Wednesday), and I can’t even tweet that out or be there,” Johnson said. “Serena Williams called me a week ago and said, ‘Will you mentor me and be on my advisory board?’ And I said, ‘Yeah, I’m going to do that.’ So when Ben Simmons called and we went through the proper channels and they made me look like the bad guy out of that situation, but I didn’t do anything wrong … I was thinking about all those times, all those guys who want me to mentor them or be a part of their lives, and I can’t even do that. I had more fun on the other side.”

Johnson, who will turn 60 in August, has many thriving business interests along with ownership stakes in the Los Angeles Dodgers and Los Angeles FC.

Johnson’s sudden decision ends another chapter in the remarkable life of the star point guard from Lansing, Michigan, who won an NCAA championship at Michigan State before claiming five NBA titles and three league MVP awards during his 12-year playing career as the leader of the Showtime Lakers.

Johnson retired in 1991 after he tested positive for HIV, but later returned briefly to the Lakers as a player and a coach. Johnson says his current health is ideal, and he insists no health concerns were part of his decision to quit the job that seemed to be his ultimate destiny.

Johnson was hired along with Pelinka when Buss dismissed her brother, Jim, and GM Mitch Kupchak just 26 months ago. The Buss children’s father, Jerry, had long envisioned Johnson in a powerful role in the Lakers’ front office, and Jeanie put Magic in charge of shaking up her storied franchise in the midst of its lengthy decline.

Immediately after taking the job, Johnson stated his plan to land at least two free-agent superstars to return the Lakers to immediate title contention. That plan rankled feelings around the league and got him in trouble when he publicly acknowledged the Lakers’ interest in George, which led to an investigation that eventually stuck the Lakers with a $500,000 fine for Pelinka making improper contact with George’s agent.

Johnson also criticized Russell for his maturity and playing style on the way out the door, but Russell has blossomed into an All-Star leader for the playoff-bound Nets. Some of Johnson’s other moves have worked out much better, including the Lakers’ drafting of Lonzo Ball, the acquisition of Kyle Kuzma and the bargain signing of center JaVale McGee.

And though James was in charge of his decision to join the Lakers last summer, LeBron credited Magic with closing the deal in a meeting before he agreed to a four-year contract.

But after James strained his groin at Christmas and subsequently sat out for the longest injury absence of his 16-year NBA career, the Lakers were unable to compile enough midseason wins to stay in playoff contention. The Lakers slumped before the trade deadline when Johnson aggressively pursued disgruntled New Orleans superstar Anthony Davis in a trade that would have required the Lakers to give up much of their talented young core.

James was shut down for the season late last month, and he watched the Lakers’ season finale in street clothes on the bench.

The Lakers have missed the postseason in each of their three springs since Johnson and Pelinka took over, and Magic didn’t stick around long enough to see whether his plan would yield another free-agent star this summer — when the likes of Kawhi Leonard and Kevin Durant should be in play — or next, when Davis should be available.

The Lakers are finishing this season with their best record in six years, but they were eliminated from playoff contention back on March 22. They had never missed the playoffs in more than two consecutive seasons before this six-year drought.

Johnson remained publicly supportive of Walton, but Magic also was widely thought to agree with Walton’s detractors who aren’t impressed by the former Lakers forward’s offensive game planning and rotations. Johnson’s decision to step down likely means the Lakers won’t make a decision on Walton’s future until a new front office is in place.

Johnson and Pelinka, Kobe Bryant’s former agent, didn’t know each other before they were paired by Buss, but Johnson said he worked well with Pelinka. Johnson also pointedly refused to say whether Pelinka should remain as the Lakers’ general manager, saying the decision rested solely with Buss, whom he repeatedly called “my sister.”

“She doesn’t know I’m standing here,” Johnson said. “Because I knew I would be crying like a baby in front of her.”

This entry was posted in Basketball News & Updates and tagged nba-news. Bookmark the permalink.